So, after 5 or so days of anticipation, I went and tried the Muir Main to Butler Main route. It isn’t a street bike ride, but if you can handle somewhat washed out steep sections, you’re good. 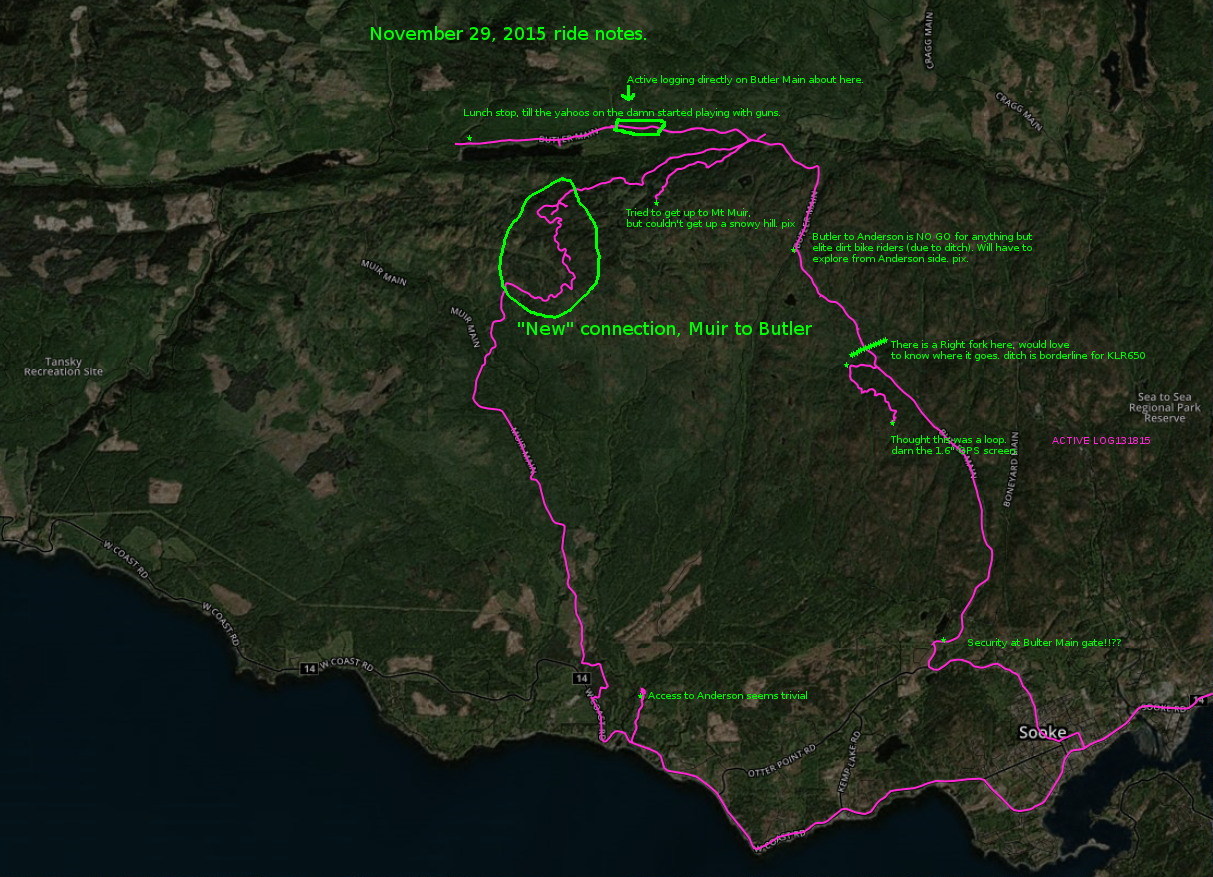 Apparently hunting season is on in a big way… at least one 4×4 had been through ahead of me, and there were lots of hunters off of Butler Main. Perhaps enough that they had security tracking entrances and exits at the main gate? I should have gone back and talked to the gatekeeper to find out what was up. I just expected the gate to be open, but there was someone opening it for each vehicle when I came out. They lost interest in me once they found out I came in via a different route.

Anyhow, it was a good ride. I was up and on the road fairly early. Didn’t want to start too early due to all the frost. Screwed up and dumped the bike as soon as I got on a logging road. Tried to slow down for a little tree across the road… forgetting I was crossing a frozen puddle and using the front brake. While I dropped the bike a number of times, that was probably the only one which had any speed (and there wasn’t much).

RIght… I forgot to talk about the snow. I was expecting ice, I thought there might be snow, but I wasn’t expecting any… and there wasn’t much. But there was a good 2 or 3 cm on the shaded parts of the road, and that was bad enough that at one point I had to get off and walk beside the bike to get it up a hill. By the end of the day I had far more experience riding in “loose stuff” than at the start of the day… but when you are starting from near zero, that isn’t hard. It wasn’t as bad/scary as I expected. The back end tends to stay where it is… at least if you’re trying to go basically straight, and as long as you’ve got some speed on, correcting isn’t hard. Things get bad when speed goes away though.

Drat. If I put captions on the images, the aspect ratio goes to heck. The height is obeyed and the width is ignored. 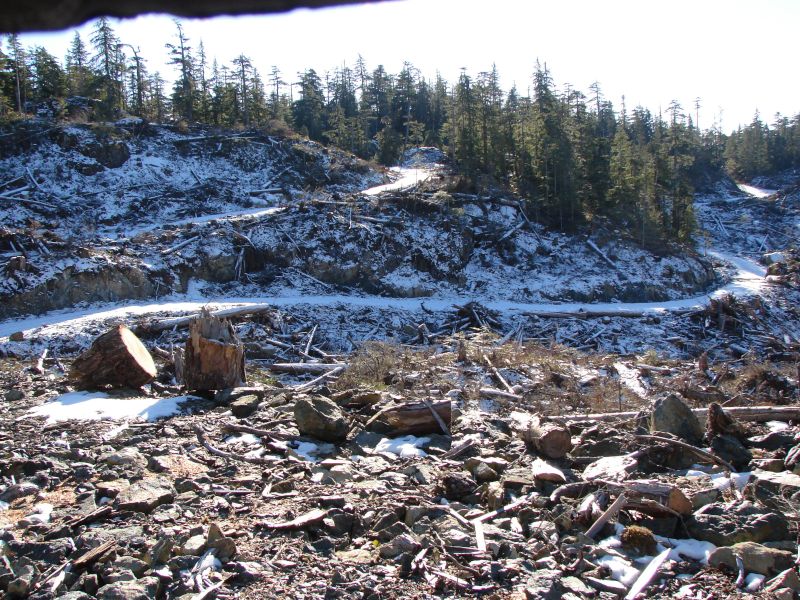 “Snow where the sun doesn’t shine”

So I made it through my route. And I was wanting to try to make it to the Mt Muir summit, which the maps say has logging roads all the way up… but I was having a headache finding the route on the tiny 1.6″ garmin 60cx screen…

So I went up butler main to see how far I could go while the active logging on butler main was shutdown for the sunday… Got up to Bear Creek reservoir. Walked down to the water. Took a snack break back up on the road. I’m cursing myself for forgetting to take pictures of the bridge there. The bridge is built over a deep canyon, and the canyon walls are held back with logs. It was a primitive but impressive bit of engineering. I ended up leaving quickly when the yahoos parked on the dam decided it was time for target practice… thus my forgetting to take the pictures. 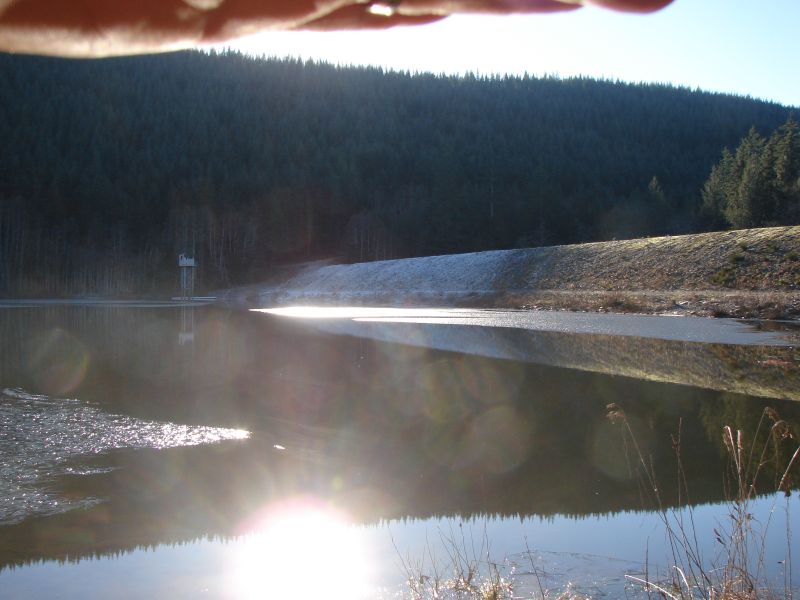 I messed around with the GPS until I got Mt Muir on the screen, and basically asked the GPS to navigate me to it. It seemed happy enough to provide a route that looked sane, so that was where I headed. It was back tracking down the chunk of Butler Main I’d done, but that had to be done anyway. The route the GPS picked was not the one I thought I’d made notes about, but trying to pick a route off that screen when the logging roads are quite parallel and you can’t see much is difficult. As expected, the route got up out of the valley and the snow returned. In fact, this route was somewhat southbound so the snow got fairly bad. Bad enough that after ten minutes or so of trying to push the bike up a hill, and having dropped it a couple of times, I decided that I didn’t really need to make it to the summit. 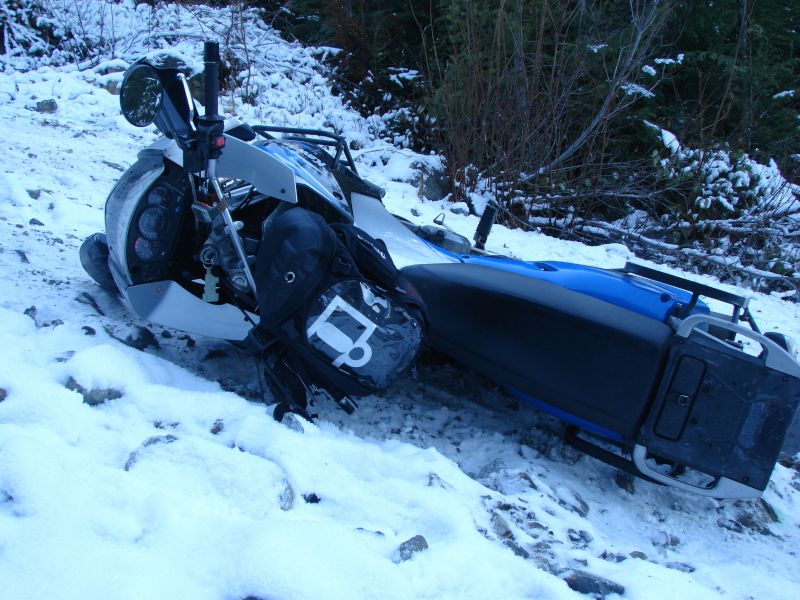 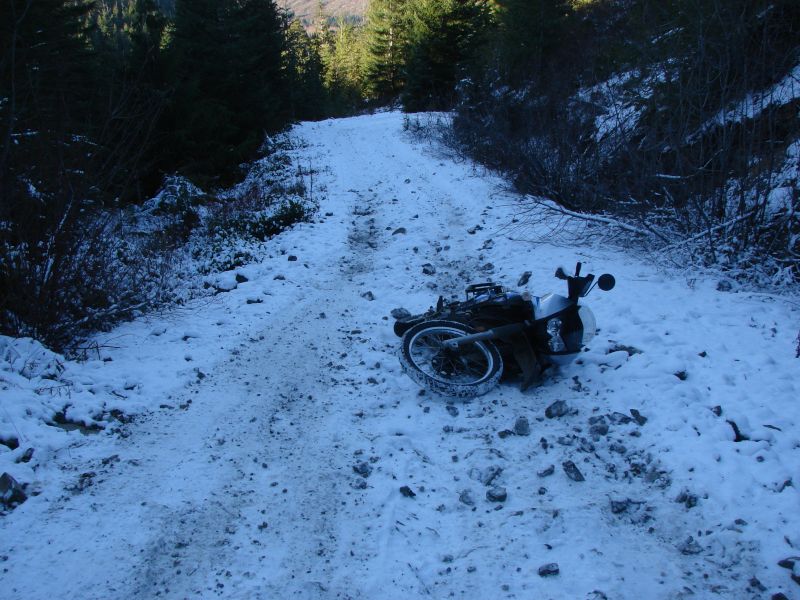 So I back tracked to Butler Main and headed southward looking for the junction with Anderson Main. I wanted to run the length of Anderson to where I’d ridden the south end of the road earlier.

I found it, but getting onto it was another thing entirely. There were some dirt bike tracks, so with the right bike and skills it can be done, but it was totally impassable for me. 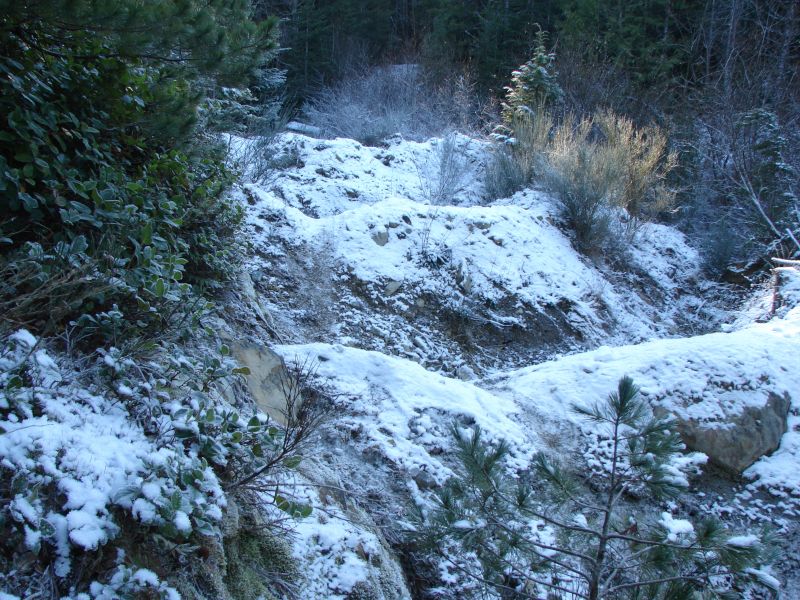 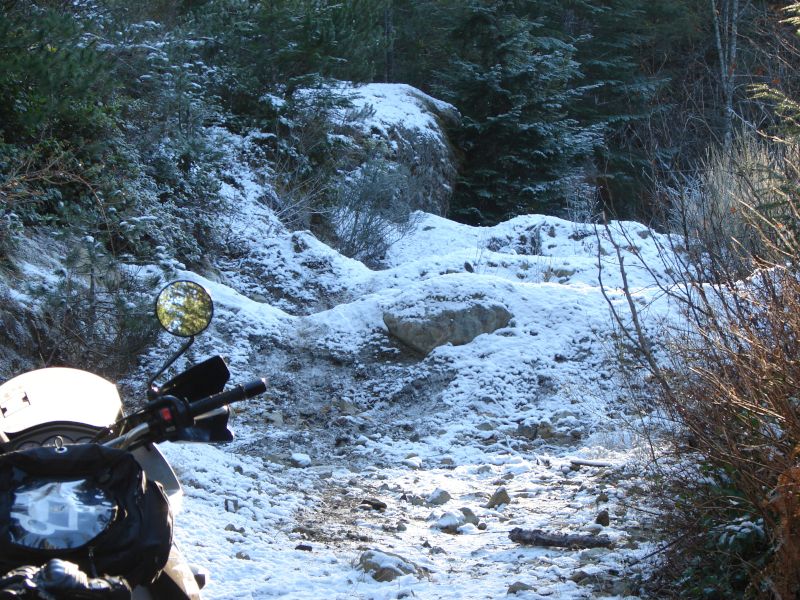 And if you can get past the triple row of ditches, then you need to cross the creek. 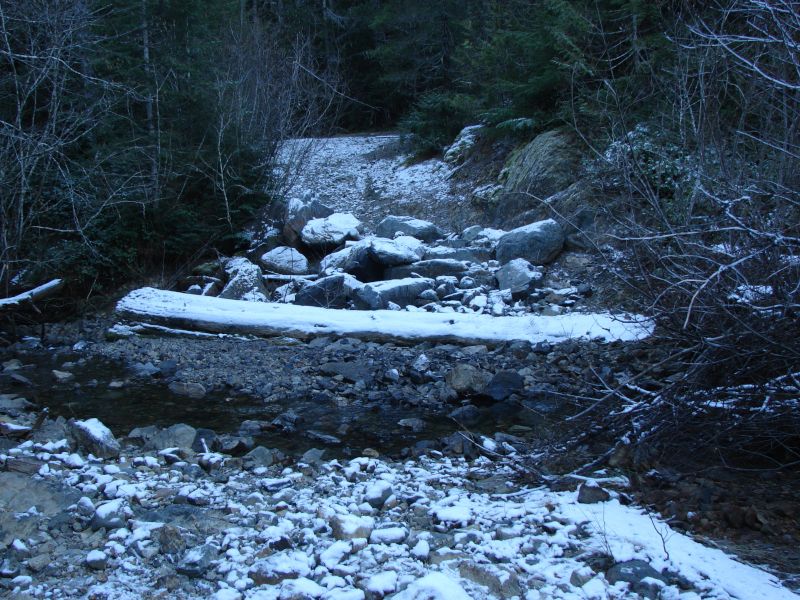 I think that was the end of the interesting stuff. I rode S on Butler Main looking for pretty much any right-hand spur. I Ended up taking a fairly long one… which (blame it on the GPS again) looked like a loop. That said, there was a fork near the start of that spur… One that went W when the spur turned back South. I figure I could have gotten across the ditch fairly easily, but I wasn’t at all sure about getting back.

There was the little surprise of having a security check at the start (S end) of Butler Main (see intro), but otherwise, the rest of the ride was relatively normal (but cold).

Oh right, the obligatory out of order selfie: 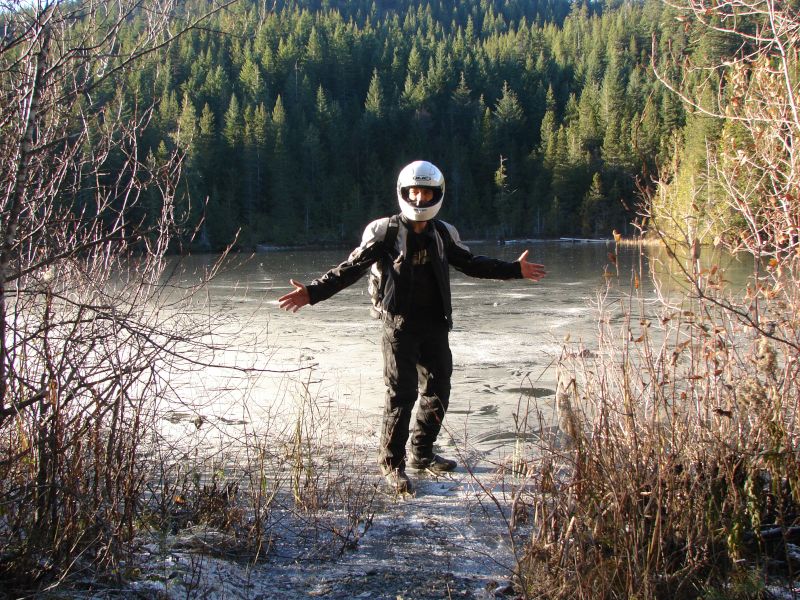 GPS track says total distance (home to home) was aprox 180km, 8 hours and 5 minutes. If you cut the traces at Sooke River (track shown in summary above), distance is 96km.

(edit: Was too far/long a ride. I’m still wiped Monday AM.)