I wanted to check out a connection leading off of K-line to the GPX track that I rode with Gerrit and Luke the day I met them. I figured it should be mostly main-line riding, and fairly easy. So I posted it as an open invite to the local dual sport group on FaceBook. Well… there wasn’t much of a response online, but there were twelve riders at the rendezvous (first lesson, request RSVPs so you have a rough head-count).

Two tracks shown on the map. Black was the group ride, green was my solo ride later.

It was a big group, and quite a mix of riders. In retrospect there probably should have been a lunch spot (way) closer than Pete’s Pond, and more than one track to get there… preferably one easier and shorter track, and another longer and harder track. Let the riders decide at the rendezvous which track they want to ride. With the exception of mis-matched friends who want to ride together, this should make everyone more comfortable.  (lessons two and three? 2 = Pick a round-about path to a relatively near destination, 3 = Two different routes.) Keeping the lunch spot closer to the start allows lots of fall-back options should there be trouble (tree down, medical, low-on-gas, weather, …). Following that line of thought suggests having a guy on a quad could be a good idea (Chris H :).

Hhmm, looks like I’m not going to get to finish this write-up today, so I’ll just summarize it.

We didn’t take the most direct line to checking out the M-Line connection I wanted to look at. Wild Deer lake wasn’t really in my original plan, but we were going to go close to it, so I didn’t think twice about tweaking the plan to go visit it… except we backed out to Holt instead of taking the direct route, and then we got a chance to loop up through Crescent by the power-lines … good, but still adding kilometers… and then I massively over-shot the M-Line turn off. There was still a purple trace on my GPS … but obviously _not_ the one I was supposed to be looking at. And it was raining out by M-Line. The M-Line connection worked fine and put us where we were supposed to be, but the track to Pete’s pond was snowed in. So we had a bunch of wet riders, low on gas, out in the middle of the boonies and no way to get to the intended destination. The original plan was to run south to Todd Mountain or SW to Fleet. This got vetoed as likely to be snowed in… which probably was not correct for the Todd Mountain route, but with the low gas situation we probably were best advised to take the “known open” and shortest route out of the woods. So we just back tracked to Holt and to the pub in Duncan. I can’t speak for everyone, but I know the guys I normally ride with were kind of “well that wasn’t much of a ride”, all main-line and no campfire :( 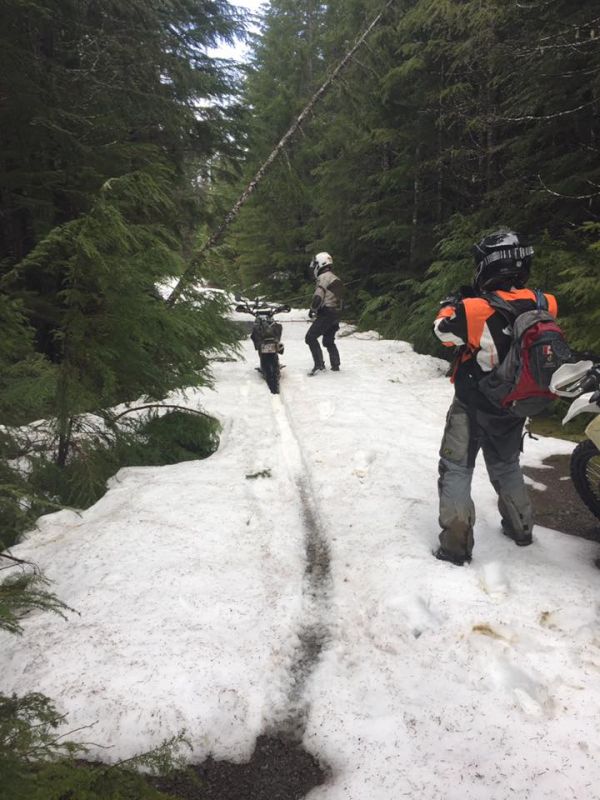 I wolfed down a lunch, put gas in the bike and ran back through the woods on the green track. Part of the logic was to look for the tool-wrap that I seem to have misplaced and last used at the Riverside Rd entrance…

Unknown to me, Gerrit, Luke, and Francois all decided to ride back to Sooke through the backwoods.

My solo ride to Riverside was a blast. I haven’t really ridden solo since I gave up on the KLR last November. I’d forgotten what a simple joy solo exploring is. See an interesting tree, rock, bird, trail, whatever? Slam on the brakes and go back and look at it. No having to explain, no fear of getting rear ended, just a bike underneath you and a world to explore. Awesome. And if there isn’t anything interesting, well, amuse yourself with the track and open up the throttle.

I will likely be doing more soloing, taking a big group out to explore connections was clearly NOT the best of ideas.