Had some areas, entrances I wanted to check out, and a favourable forecast.

Was a heck of a good ride. Turned right about 6km too early for Hill 60 FSR. Looked right on the GPS, just didn’t look right in real life. Pushed on up an old logging road or quad trail, which took me to the power-lines. Those took me to a road that could have been a FSR. Followed that up a bit, was following an old logging road with some deep ditches in it… but decided to take a side-road… I believe it was shown on the backroads gps map as going in the right direction. Well, it rather abruptly became impassable at the same time an ATV track forked off. So I followed that. Apparently someone has laid tracks out, as the other end had been well marked by the signs were un-readable. Followed another old logging road in the right direction. Found a puddle with a hole in it… was trying to go over a little step-up over a root only to find that with the under-water rut, a 21″ wheel was no-where near tall enough. Video might be interesting. Turned out any other line would have worked.

That came out on the “real” Hill 60 FSR, which was a boring mainline, that in combination with the backroads GPS map that said fork off here to go straight to the summit caused me to do just that (big win). Much more interesting roads, and to be honest a much shorter path. I came out via the FSR, just so I knew where it was/went, and it was long and boring. Anyhow, I think I found Mikes lunch/camp spot. Found another nearer the FSR entrance when I scouted out some un-mapped tracks.

After that it was time to head to Lake Cowichan for gas, no point going into Skutz with anything less than a full tank. That done, and back again, it was time to go across the bridge at Skutz falls park. I picked a way point in the right general area and asked the GPS to take me there. It did. It was an (ugly?) technical climb up a washed out road, but not so steep as to actually be problematic, but baby heads do get annoying after a while.

The merge of the old road to the new logging area had been blocked with some small tank traps (ditches) and a big log. The path through the ditches is easy and the track just goes up around the end of the log now… or over it if you’re daring… essentially it is trivial compared to the climb up the hill.

From there I ran up the valley. This was a big of a maze, and even with the GPS I made a couple mistakes… it basically came down to stay right (which is also stay low). The goal here was to see if I could connect with a track from last November.

The problem we’d had on that ride was that the logging co had pushed through a new road and there was no clear connection to the old road through the slash of the recent falling. That has basically been cleared up… it isn’t an easy connection, but it isn’t hard either. I wandered on a bit, as I wasn’t sure why we had done a U turn … I suspected we had run into a bridge being out, but that wasn’t the case, the road simply continues on over a nice little bridge (and is not yet mapped in OSM). I was far from home, so I back-tracked to the top of the first hill from the bridge. My online studies said that google maps suggested there was another route down, this one to the east. That wasn’t too hard to find, and indeed it is a much easier descent. This track is NOT washed out, which is why it was muddy and slippery due to the recent rain.

That led down to Skutz Falls main… which at Mike’s suggestion I ran east on until I got to the powerlines. Turned south there and started up the hill. That turned out to be a heck of a climb. Like the Mt Woods powerlines, they seem to get steeper and steeper until you’re suddenly done. Traction was a bit of an issue, and summer dryness would likely make the climb easier… but it was steep enough that I was struggling to stay far enough forward on the bike and keep the front wheel down. I had to try the last run twice, and also took a minutes to let the bike idle with the fan on as it was clearly working darn hard. The break probably didn’t do me any harm either :)

From that crest it was pretty much due south over the top of a plataeu. The most interesting thing was having frogs in the puddles on the road.

Got to holt, ran 1/2 km or so down it without meeting any of the feared trucks, turned S (right) onto crescent and went to check out the lake that Mike had asked about and Thane had provided directions to the previous sunday. Nice little place.

From there the plan was to cut back to the power-lines, but it turns out that there are no obvious/direct routes back to the power-lines from crescent. There must have been one or more, as we took one last weekend, but I missed it. Crescent is a nice easy ride. I had the option of going back onto the power-lines where Crescent crossed them, but opted to follow Crescent to Wild Deer Lake and go south from there. Looking at the map, that was the long-way to go. I did spot an elk in this section. There was a small bear up by Bear Creek too.

From there it was a pretty routine run to the end of Mountain Rd, out the pavement to the highway, down the highway to Mill Bay for gas and coffee. I went into the Mt Wood area through Frayne, thorugh the single track and up the powerlines, then down to the malahat exit… then home. Got lightly rained on just past the malahat summit.

All in all, a _long_ day, with lots of new turf, some challenging riding, and more than a few new tracks added to OSM. 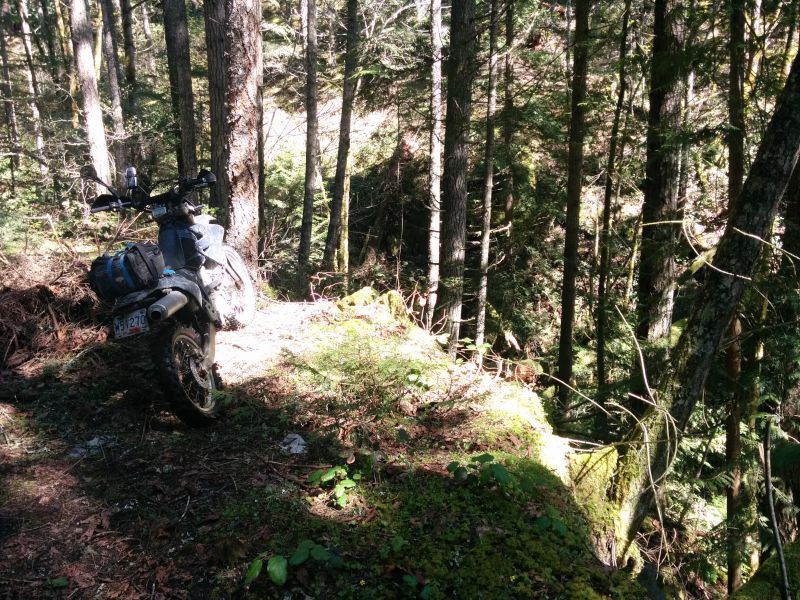 Camera didn’t capture this well, too much dynamic range… beautiful little creek valley (most are). Long before I got to the real Hill 60 FSR 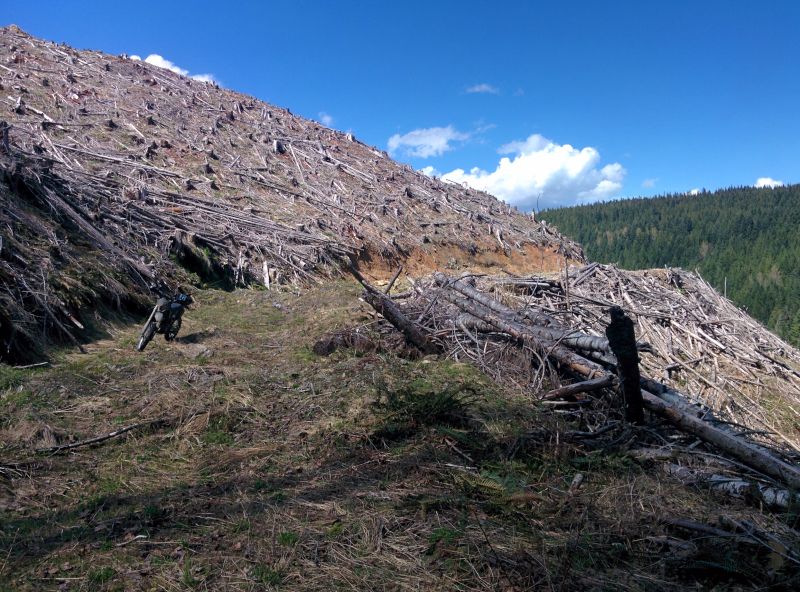