.
Rambling bit about Bill James dam etc:
There’s a story I was told, but wasn’t entirely sure I believed, but a little research seems to back it up. There was a dam built near the headwaters of DeMamiel Creek, to try to maintain a minimum level of summer water flow, it was built with lots of volunteer work and some government money. The DFO (department of fisheries and oceans) helped build it, but then decided that they could not afford to fix a construction mistake (DFO’s error apparently) and that the only solution they could afford was to decommission it. Seems like there was significant public resistance. Apparently part of the government aversion to dams was the failure of a dam at Testalinden.
A little more reading and it is hard not to come to the cynical conclusion that big money can do whatever it wants (Mount Polley anyone? Still doesn’t seem to be any legal  consequences or fines for that disaster). And BC has _no_ effective environmental law enforcement (Testalinden and observations of the logging industry – my own and others). And clearly, the little guys (local salmon enhancement group) get pushed around.

July 2010: Review of Testalinden dam failure. Horrible rambling/repeating document, but has some pictures: http://www2.gov.bc.ca/assets/gov/farming-natural-resources-and-industry/natural-resource-use/land-water-use/water-use/dam-safety/testalinden_slide_failure_review.pdf
Jun. 14, 2010: Article on Testalinden Lake dam failure:
http://www.theglobeandmail.com/news/british-columbia/failure-of-nearby-dam-caused-bc-mudslide/article4322182/
.
Back to the Ride…
Rendezvous was in Sooke, at the normal meeting place. I got a bit of a surprise when Mike walked in… the minute he introduced himself I recognized him from junior high-school.

The rough plan for the ride as proposed by Mike had been a “lake tour”, and that is effectively what we did. We started off of Otter Point Rd, and went to the reservoir where the “Dog Patch” lean-to is. From there we took a round-a-bout route up to the NE end of the normal Tugwell East riding area and continue up the road that Luke and I started up but got turned back by snow. That also took us past the intersection that we got to on the “try for two lakes” ride. The first stop was the old Bill James dam that I was writing about above. I should be able to pull from stills from the GoPro.

From there we backed up a few feet and headed up to the Lake that Karl calls “Epic Lake” and which others seem to call “Upper Bill James”. Whatever name you assign it, it’s a pretty lake. 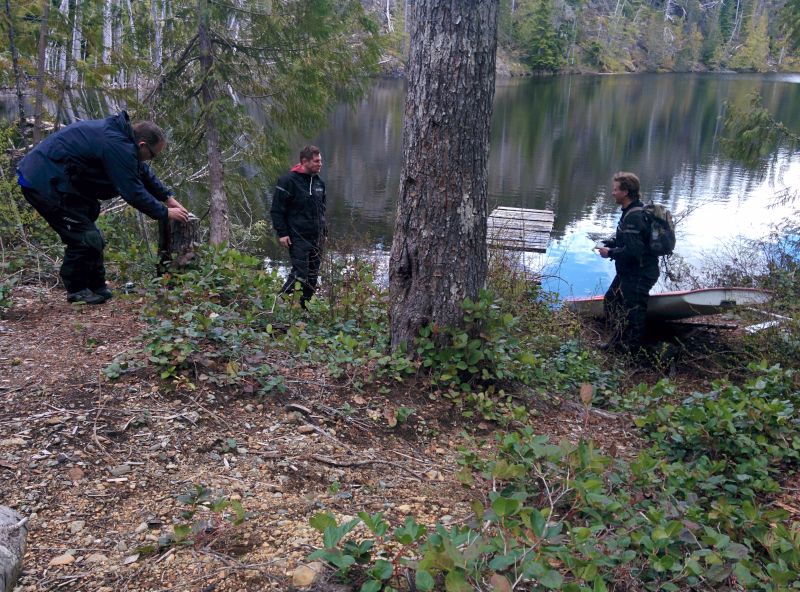 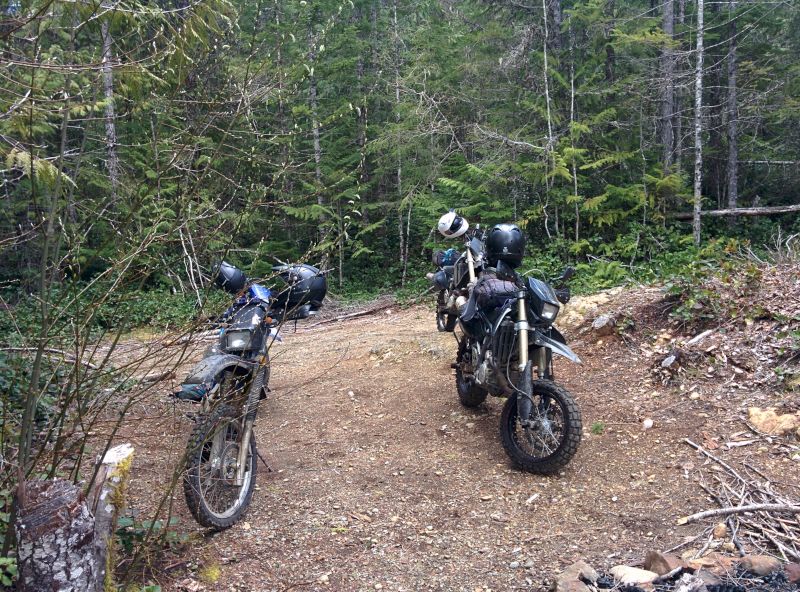 After a substantial stop, we backtracked down tugwell to the tugwell creek crossing. We passed Bjoern, Mathew and two of the grom squad there. From there it was straight up Tugwell Main to Tugwell Lake. Tugwell Main starts as mainline, detoriates into old washed out dual-track, and then the trail to the lake is pretty gnarly. I’m very curious to see what I recorded on the GoPro. 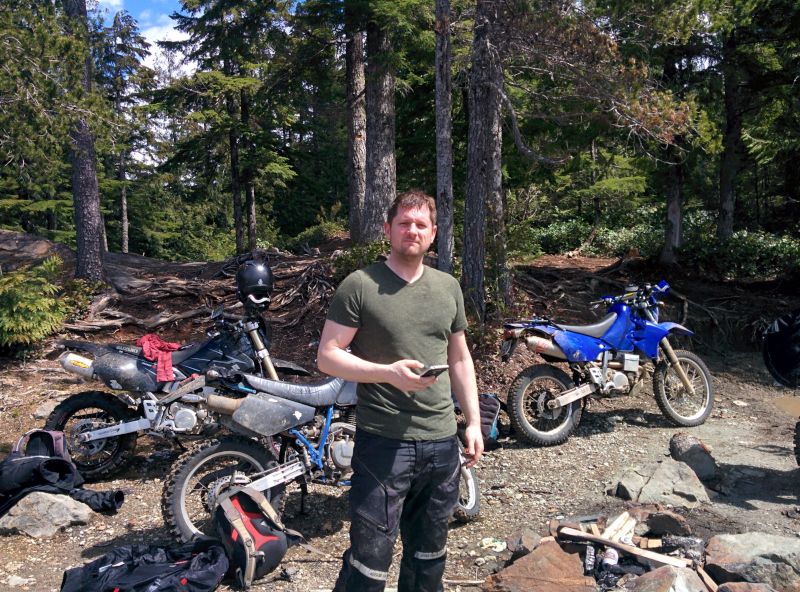 From there we ran back down Tugwell Main. I wanted to run down Tugwell spur to at least as far as Luke’s Trail. Unfortunately Brett got caught in a rut. (Facebook.) After that unscheduled break, Karl and Brett decided to head home. It was shortly after 2pm, and I wanted to keep riding, so Mike and I ran the whole Tugwell Spur and the track over the shoulder of Mt Muir to the Muir <-> Butler connection, then down Muir to the highway and headed for home. Sooke Rd was closed at Gillespie, which pushed us through Metchosin, so I stopped in to visit my folks :). Word on Facebook was that Karl had a spill on the way back. It seems they decided they were not finished riding either and played on the Tugwell East power-line track, where something “just didn’t go 100% as planned”.

All in all, I had a great day. Hopefully Karl and Brett only got bruises.

I have video (so do Karl and Brett). No promises as to if/when I get to editing it.

A little more rambling about that dam. Oliphant lake!? Why is there an obsolete concrete dam up on top of the Malahat. I’d already pondered why it was still there. AFAIK it was built for Bamberton, which is now “just” a provincial park, no need for a water supply. So one hand of the government is deactivating useful dams, and another leaves dams to rot. Yes, I can imagine they have different failure modes (earth dam vs concrete dam), but one little dam in a valley out in the woods, versus a lake on the top of a mountain surrounded by people/roads … and we keep the mountain one?!