Needed to get out before I blew a fuse, had some scouting to do. Turned into a pretty good ride (even if I did get wet).

Started late and got home late and tired. I wanted to check out a couple of things.

I had been looking at some old GPX tracks for Mike R’s camping weekend, and the 2012 and 2013 orca runs did a loop involving K-line. My memory of the K-line gate by Kapoor didn’t seem to match everyone else’s so I thought I should check that. It is (still) closed and locked, but as others pointed out, the bypass is pretty easy for bikes. ATVs on the other hand seem to be pretty effectively blocked. There is a faint trail on the west that runs through a few feet of swamp. I declined that. I did actually run past the gate a few feet just to make sure the bypass was as easy as it looked. Always good to know the exits if there is ever a problem.

Karl had talked about a place called Nikki’s Nest, which I figured had to be North of Kapoor, and likely was the rightmost branch where we parallel Kapoor to make it more interesting. That was some neat riding. I wouldn’t call it a trials trail, but I wouldn’t have taken the KLR down it solo either. I didn’t explore it fully as the sky opened up and I got pretty wet before the neurons fired and made me put on my rain gear. I think the worst of it was brushing past wet branches. Anyhow, there was a downhill section that was big roots, and I wasn’t 100% confident that I could get back up without a lot of work… Since I didn’t really know where I was going I just turned around and followed the other main track at the fork a little ways back. Anyhow, that was a neat chunk of technical trail. I’d happily ride that again with other competent riders on light bikes.

There was a nice little maze of tracks where I got back to (and crossed) Kapoor. Had a drop in there. Went through a swampy section and then promptly lost it in the mud on the far bank (overconfident)… just blew the rear out when I had zero traction and a little power on. No harm to me, but I notice both front turn signals are floppier than they are supposed to be.

From there it was down to the K-Line intersection (see above). From there I continued west on Kapoor/Old Renfrew. Scouted a new spur (huge clearcut) on the south side of the road. That actually almost cuts through to West Jordan. Continuing from there took me to the Todd Mountain turn off.

At this point I had to basically make a plan. One option was to go south-west and checkout the trail we’d worked on for the Williams Creek Main to J40 connection. I didn’t really get to try riding it, and I’d like to have seen the top section that was snowed in. The other option was to ride north, see if I could get to Pete’s Pond and then maybe find the LIRC folks camping at Cowichan River.

I chose to go north. That meant re-tracing my steps from the fleet-600 ride, which is fine, that was a good one. There is one little sketchy section on the shoulder of Mt Todd, where a bit of a slide has filled most of the track, and the road is more heavily cut by a creek than I remember, but otherwise Todd Mt to the old railway bed is fine.

Northward up the railway bed and good logging road toward M-line. Northward from the fork there, past where the snow had blocked us on the 13 rider rider. I did have to ride through a few feet of snow, but it was basically gone.

And then it got SLOW. The road was fine, but the trees (willows? Whatever has those furry pods we called pussy willows) were still horizontal from the snows, so there was LOTS of stopping to break branches back or lift a big branch and idle the bike under it. I even used the hatchet once or twice. Somewhere along the way I had looked at the time and the GPS and said to myself “It’s later than I like, but it is only 12 kilometers to Skutz Main, shouldn’t take long”. Well, it probably took the better part of an hour.

I stopped and ate at Pete’s Pond. Took a few pictures, and put a spare bolt into the top spot on the left radiator fairing. I cracked that fairing recently (and fiberglassed it back together), so I wanted to support it the best I could. The bolt was too long so I used a zap strap to try to keep the fairing from riding up the bolt, looked like hell but seemed to work… then again, the worst of the bushwhacking was over. 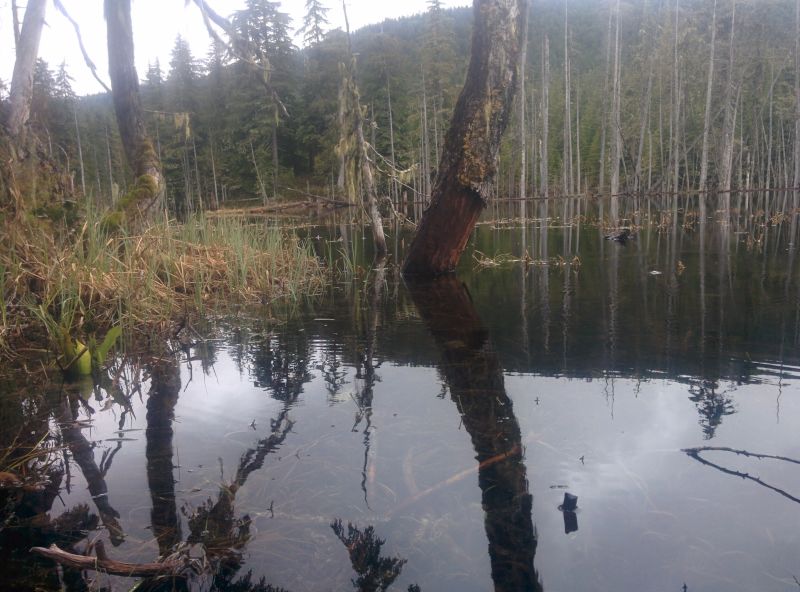 From there it was just a couple klicks to track I had already done. Fortunately I still had the tracks on the GPS from the 13 rider day, which showed the track Gerry led us on last November.

The descent down to Skutz Main was a hoot. It was a bit of slog coming up it, so I thought the descent could be ugly, but it was just a case of letting the bike go. Probably would be ugly if you didn’t have the confidence to ride it at speed.

From the Skutz Falls bridge, down Riverbottom Rd to find the LIRC guys in the group campsite at the Stoltz Pool campground. Stopped there for a bit, had a free hamburger, listened to Jamie trying to talk me into trying supermoto… tempting.

Boring tarmac ride into duncan for gas. Followed what I could remember of a backroads route from Koksilah Rd to Shawnigan. I think I’d done that before, but this time I noticed some tracks down the powerline, and when I got on that, I spotted a big green lake that looked like a quarry.

That turned out to be Kingzett Lake, which I believe is an old limestone quarry. Probably related to the same geographical feature that caused Butchart Gardens and and Bamberton. Cool place, well worth visiting. I can imagine it would have more than a few locals in the hot days as the water just screams “jump in”. Especially if you compare it to the black mud puddles that make up many of the small backwoods lakes. 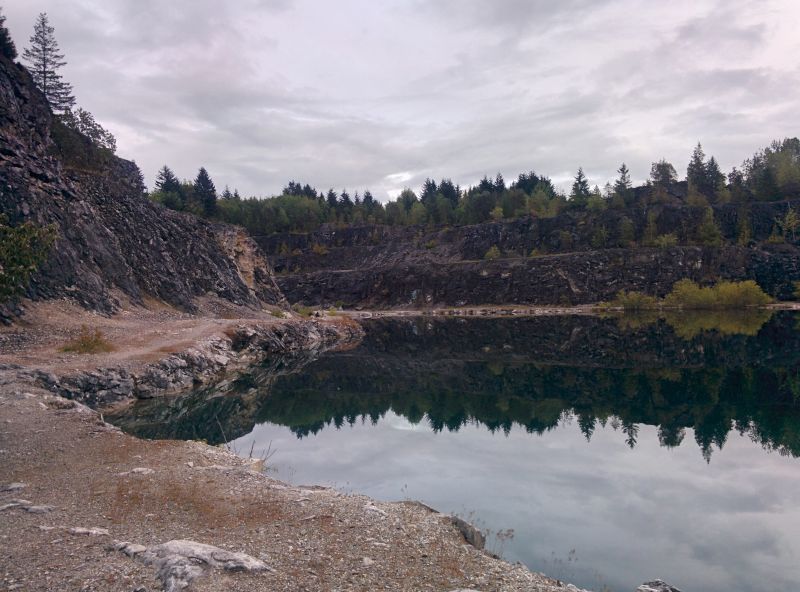 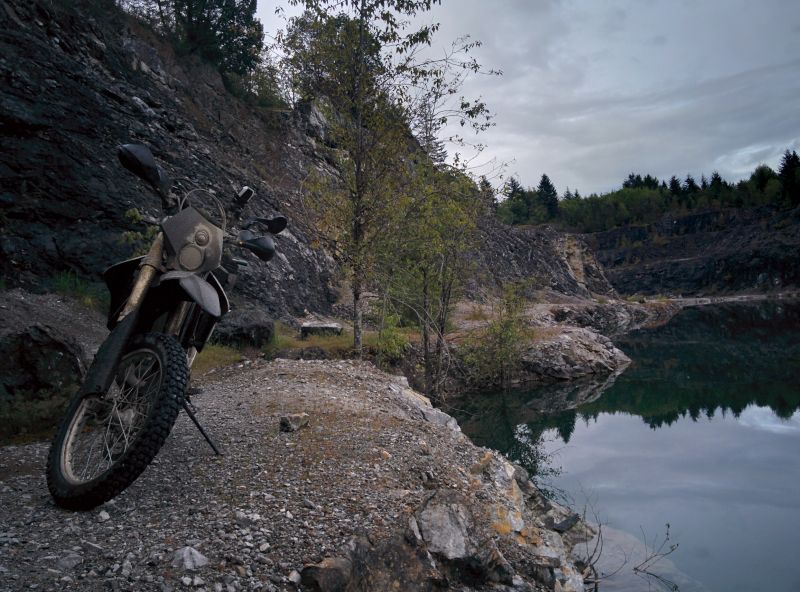 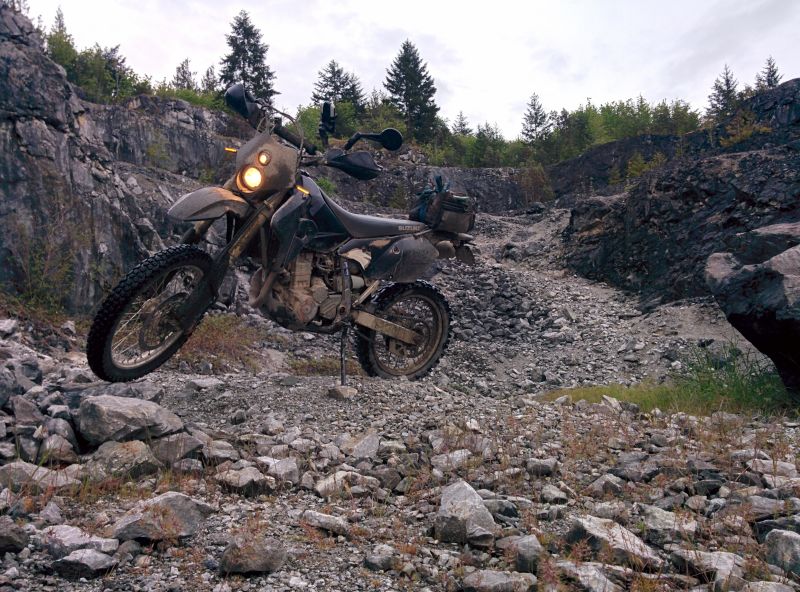 From there I did the normal run through the Mt wood area, single track, power-lines and malahat exit. Then highway, errands, and home.