Skip to content
David invited a number of folks out for what turned out to be the first camping trip of the year for all (?) of us. I started from Victoria a day early, which led to a nice mix of solo (more technical) and group riding.

The big item for me on this ride was new home-made saddle bags: 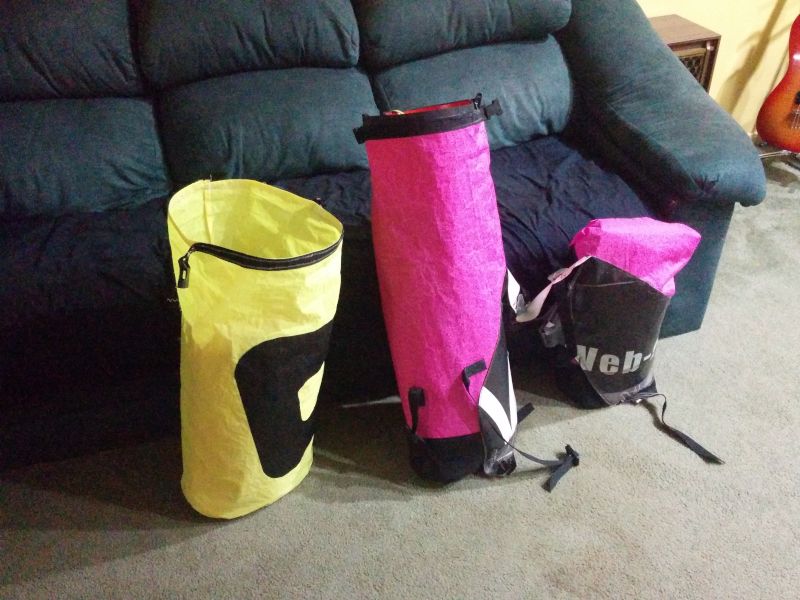 Brand new. So new that they hadn’t been tested, and I didn’t get some bike work (changing the rear tire) done. Also new was a new (to me) white gas stove, sleeping bag, and mattress pad. I’ve gone to some effort to keep the weight down. The KLR was a heavy bike, so 20+ pound panniers and another 30 or 50 pounds of gear didn’t really matter. This trip I was carrying pretty much the bare essentials. When things overflowed into the back-pack, I allowed myself shoes and sunglasses. I did have a liter of spare gas in a camp stove fuel tank (used it too).

Given that I had a “spare” day, and was supposed to meet a friend in Courtenay on Saturday morning, I chose to run through lake cowichan up by Nitinat and then through Port Alberni. From there I would go north toward Elsie Lake and then NE to Comox Lake, where I would try to find a campsite with cell service.

Small gas tanks suck. Yes, a 160-200 km range is pretty good, but it means you are always looking for the next gas station… Filled up in Port Alberni and continued north. I had a number of tracks on the GPS, including the one that Chris and Joel led me through last year, which was a long route from Alberni to Comox Lake. I wanted to get on that track, but use a more direct route instead of heading way out to the west.

Urban Port Alberni stretches quite a way to the north. I found myself trying to get to the “rail trail” which runs along the NE edge of the houses. After one false start I found the trail, and that worked well. There is a washed out creek section on it: 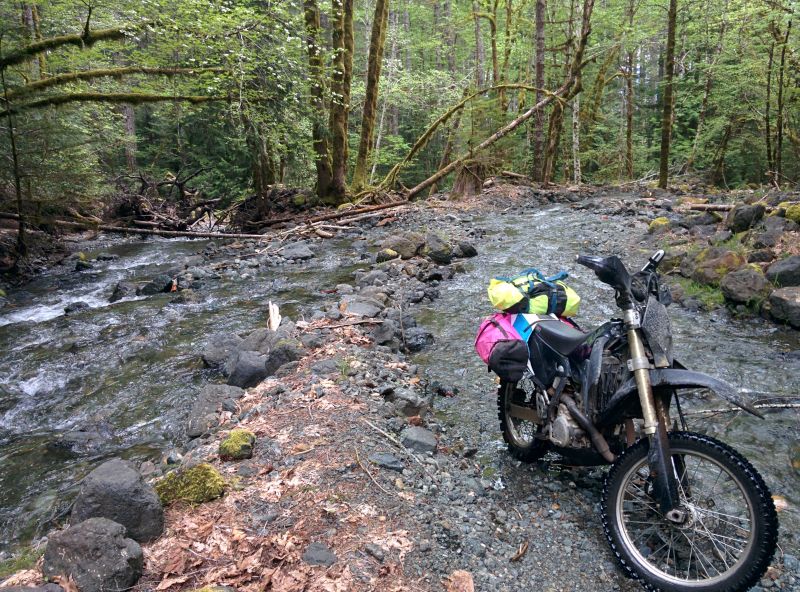 This was where I found out that the luggage was NOT working as well as I thought. The left side bag was tearing off the mounting as I didn’t have any webbing supporting/connecting it to the strap over the seat. That’s why you can see much of the blue stiffener in the pic above. The only real reason I had stopped at this point was to change the go-pro battery as I wanted video of the nice crossing. Anyhow, I had brought some spare webbing and another cam buckle. There was a strap that came under the bag, it just didn’t tie into the right spot. With that fixed, the luggage seemed to hold up fairly well for the rest of the trip.

(The attachment points where the lower straps attach is clearly a high strain point. Next version will have webbing that runs all the way from the lower strap to the rear strap, and the strap over the seat will wrap fully around both bags in a sort of figure-eight with the middle of the eight squished flat. If I could just figure out an “easier” way of attaching the bags to the “saddle” (instead of stitching them on before closing up the bag), then maintenance would be far simpler. Hmm, maybe I’ll do away with the saddle and just use one or two straps of webbing. e.g. put the re-inforcements/stiffener directly into the bag.) 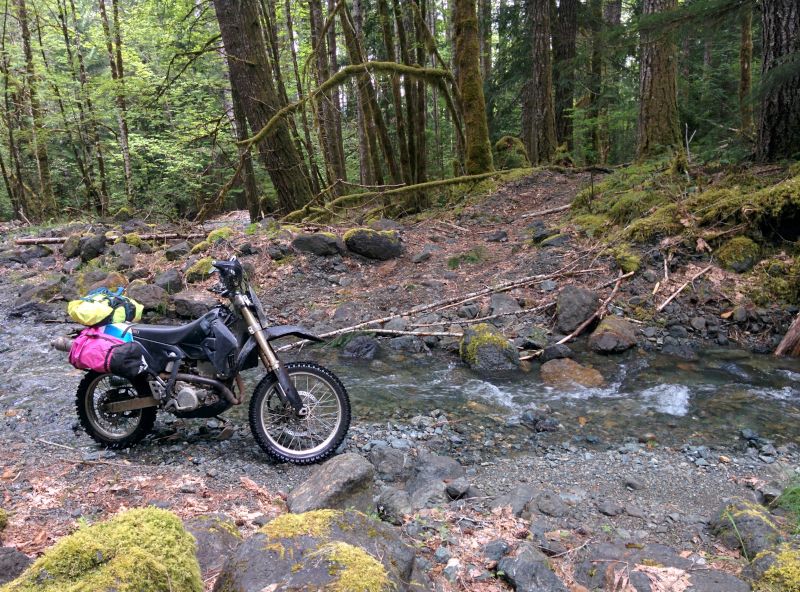 The end of the rail trail is very close to the start of Comox Main… which leads north toward the track I was looking for. The GPS did a pretty good job of guiding me through. I found one road which had been de-activated, but looking back, I shouldn’t have been there anyway, I set the waypoint farther west on the track than I probably should have… But no big deal, compared to the mileage I put in just plain “exploring”, it was nothing. A truck (looking back, it was probably hunters) pointed out this spur with a good lookout which provided the first view of Comox Lake. The single gate on this part of the route is just down and to the right. 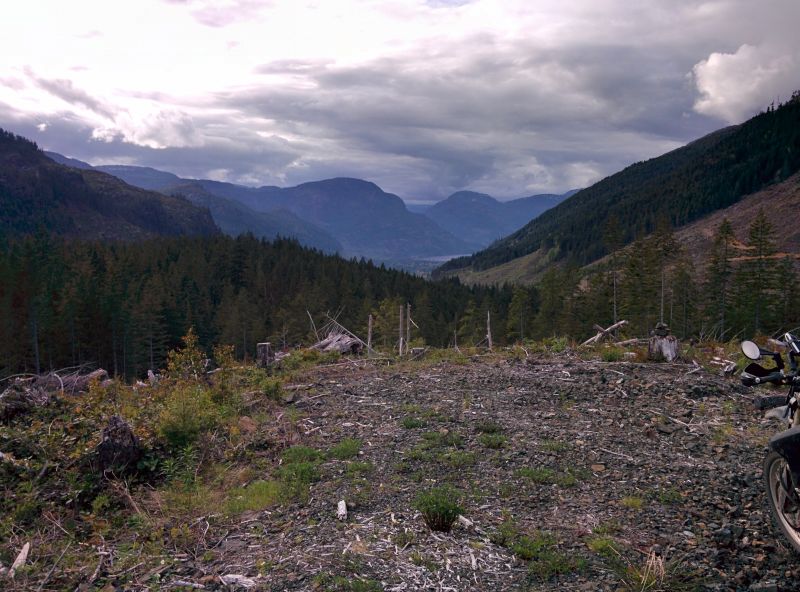 A little further on, we get to the lake.

From here it was a matter of finding a campsite with cell service. I found a lookout just off the road that had cell service, but it was too close to the road. 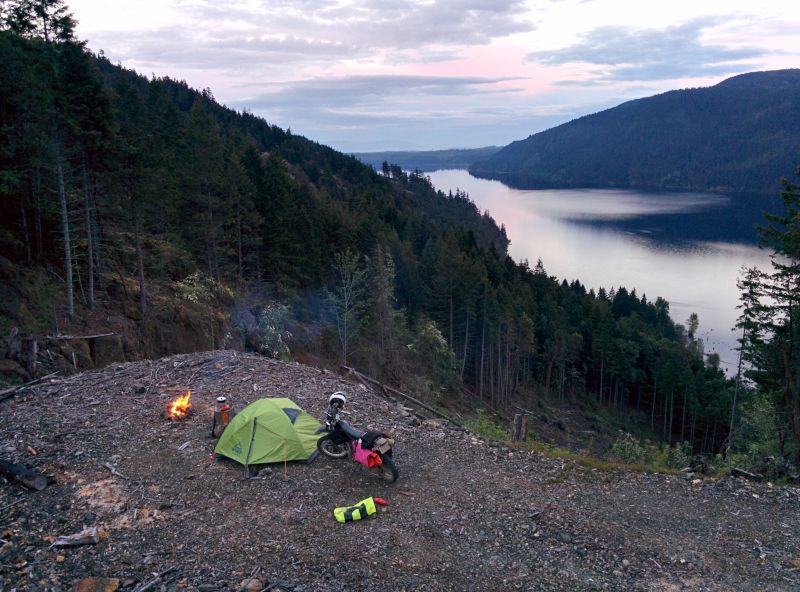 Water was an issue. I hadn’t drunk enough during the day and only had one liter with me. Should have filled the coffee mug too. 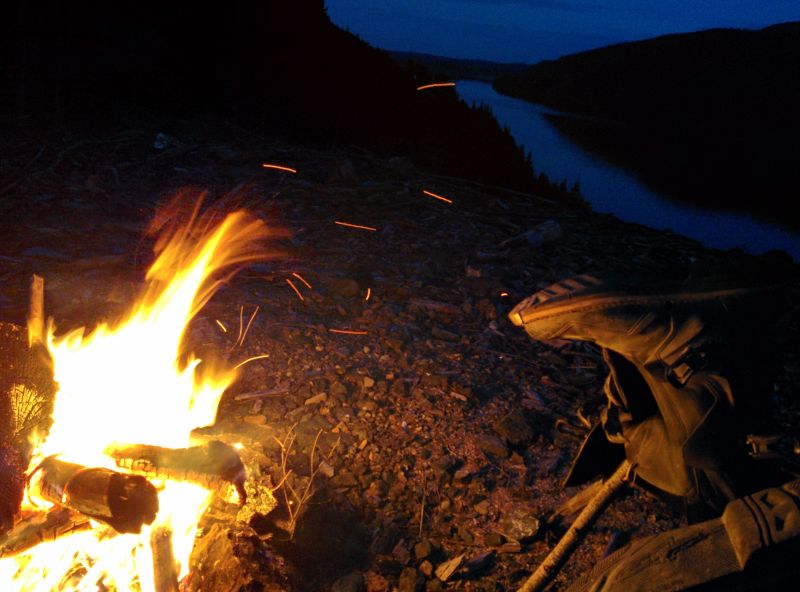 As is normal with solo camping, there was time to kill. I ended up resurrecting the boot-drying scheme from last year. A spreader to open the boot, and a tripod to stand it on. There was a significant wind at this site, it probably had more drying effect than the fire, which was being whipped pretty good. Fire was burning furious, and fast. You had to keep shoving wood in every few minutes.

First task after clearing camp was to find water… not a challenge since the main road followed the lake. Except that there was a cluster of turkey vultures at the first lake shore access… yup, a carcass in the water, likely a bear… I think I’ll get water somewhere else :) 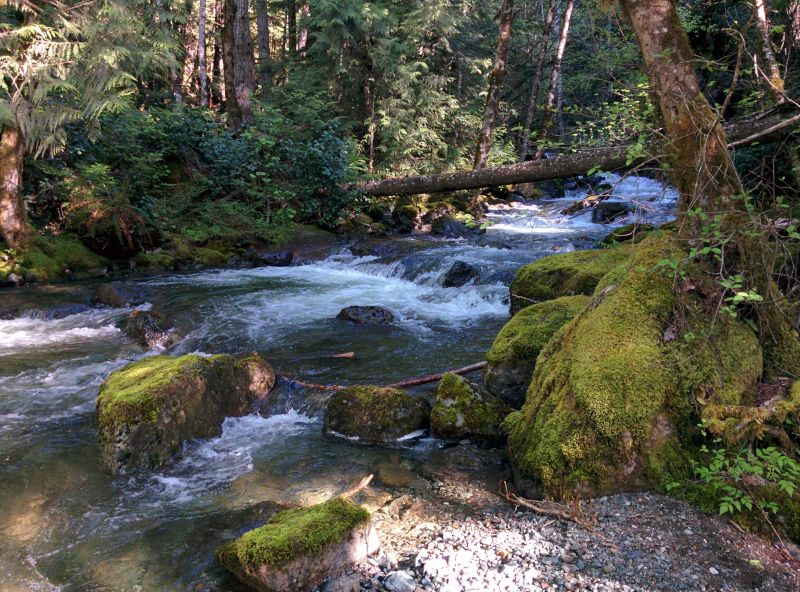 A little ways down the road was a bridge over this fast running stream. Stopped and had a good drink and filled up. From there it was into Courtenay for gas, and a little food. From there, I back-tracked to the Chris/Joel track and ran north up Duncan Bay to Campbell River. 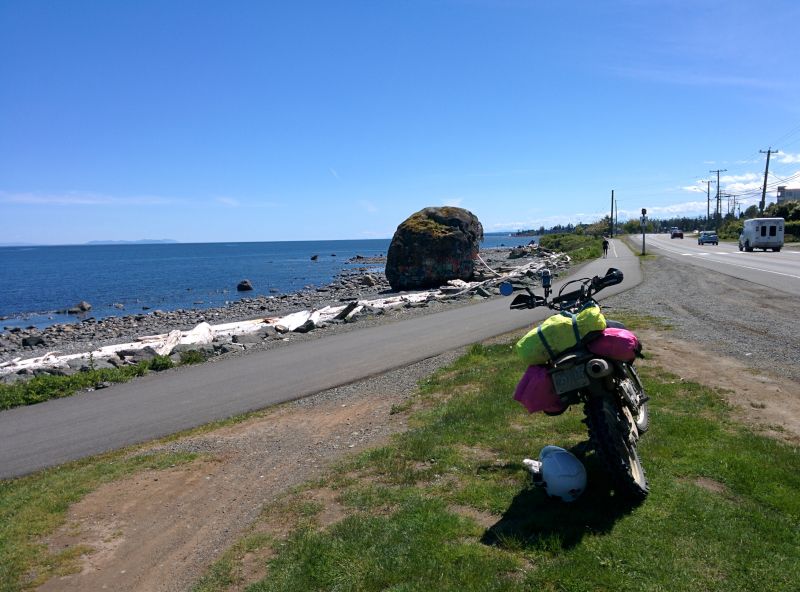 I had a little time to kill in Campbell River. I got myself a screwdriver and a rock and increased the rear suspension pre-load a bit… then soaked up some sun on the beach. From there it was up to the rendezvous at David’s place.

From David’s place we ran up the highway to Sayward, got gas, and headed up to the lookout.

From there it was up to the campsite on the Adam river. Chris and Jaki caught up with us there.

Group day 2 had us riding south to Muchalat (just N of Gold River), and then NW toward Woss. Random shots from the day’s riding. 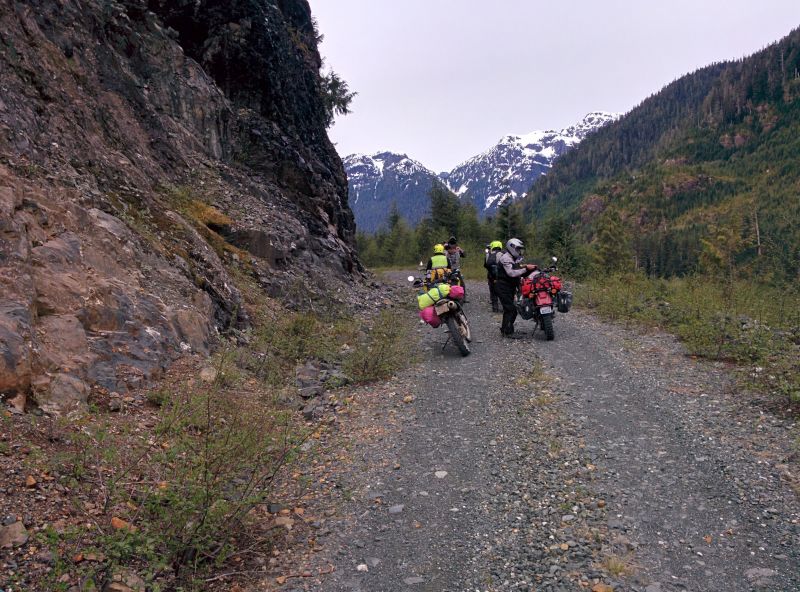 The route led us to Woss, where we got gas… which I badly needed, we’d been something like 220 km between gas stations. I’m still using the stock 10 liter tank, and had (and used) a another 1 liter. The bike (with dirt cams and carb) can get 20 km/liter or better on smooth steady riding, and that applied here. I figure I probably still had half a liter in the tank… That said, many of the other bikes had lots of fuel, so my running dry would simply have been inconvenient.

This was down a side track, near where we had hoped to camp, but the winter winds or floods had left trees across the intended campsite. So we ended up back at the campsite David chose for last years North Island Ride.

Group day 3 (my day 4) started with a return to Woss so I could top up the gas tank.

This day’s route had us backtrack toward Sayward along the highway, and then run north to the Naka Creek falls and rec site. 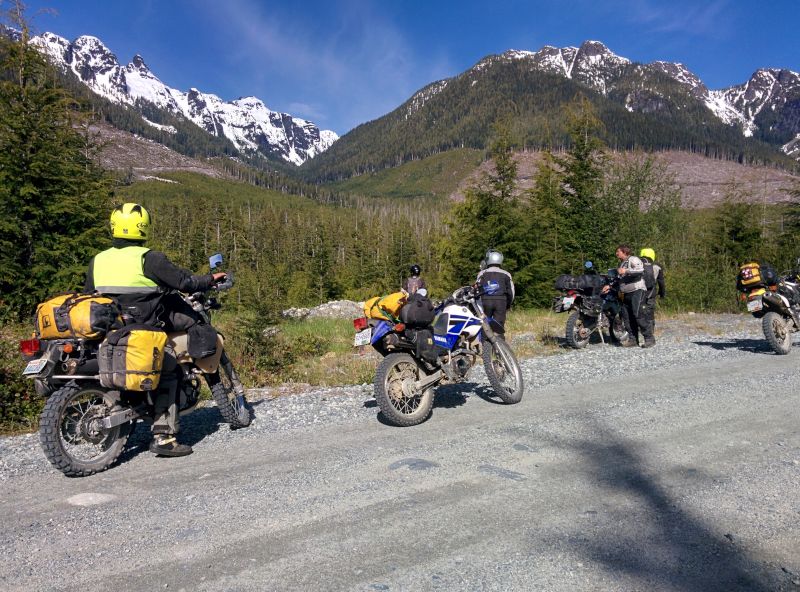 At Naka Creek, David took us for a walk up to (and behind) the falls. 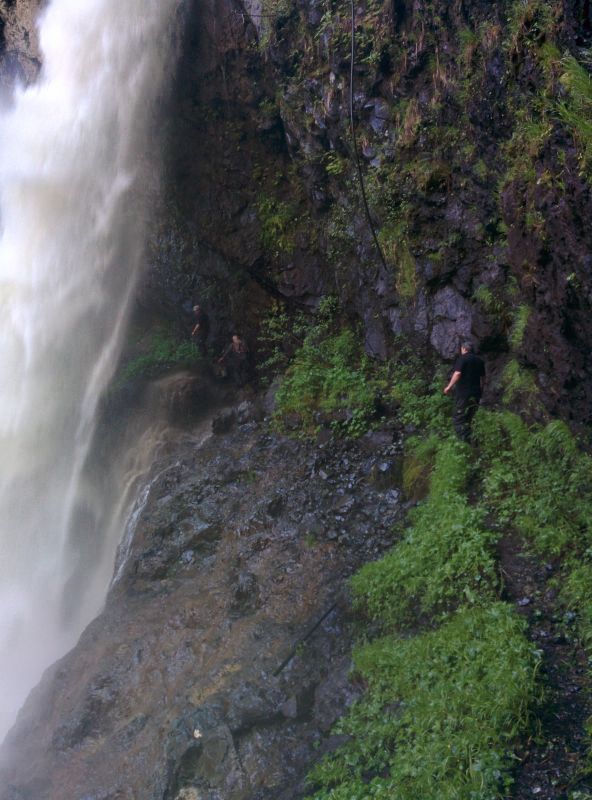 Shortly after this, Jaki and Chris parted ways with us. Chris needed to get back to work for Tuesday.

From here, David took Larry, Richard and I up a track to get to a viewpoint. This got interesting when we had to cross a washed out culvert. 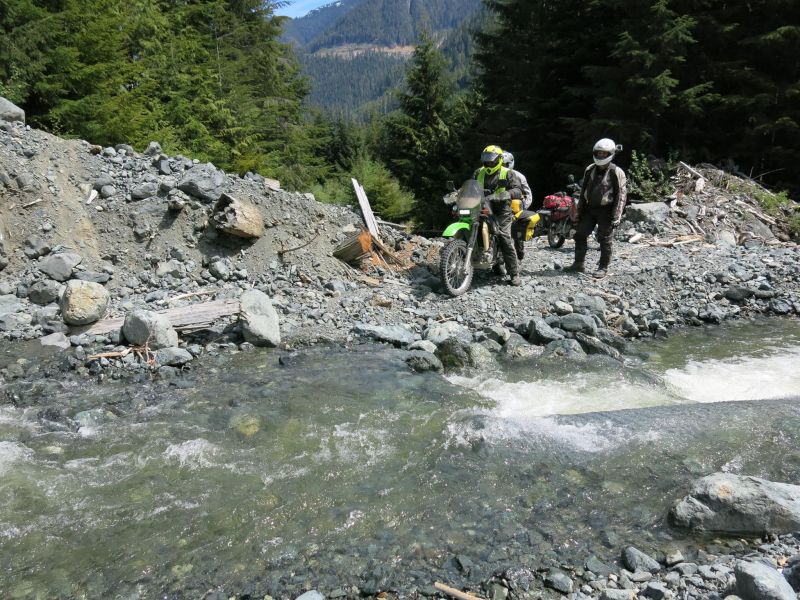 And to top it off, a snow-slide blocked the track and we couldn’t get to the viewpoint anyway.

From here we backtracked to the highway and ran back to the Sayward junction for gas and lunch (where we found my uncle, whom I have not seen in 20 years). From there it was back toward Campbell River via gravel roads. After considering a couple sites, we ended up at Boot Lake. 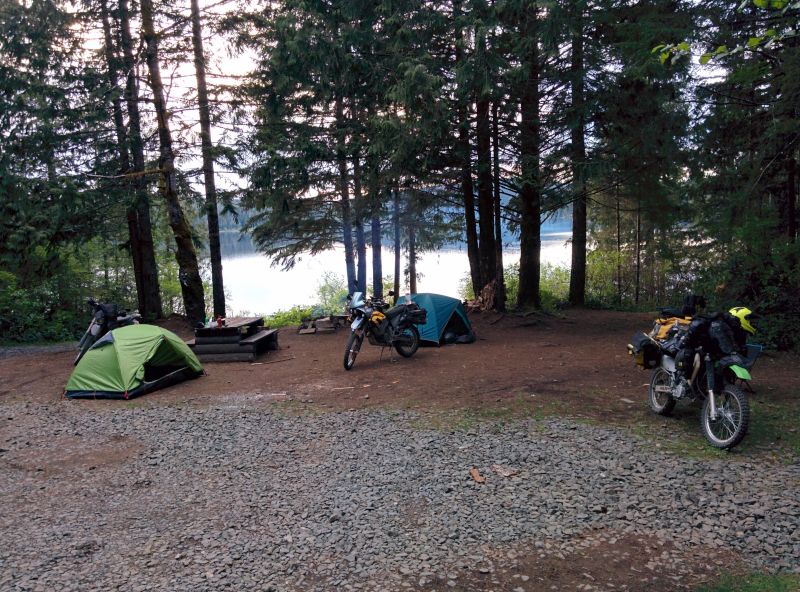 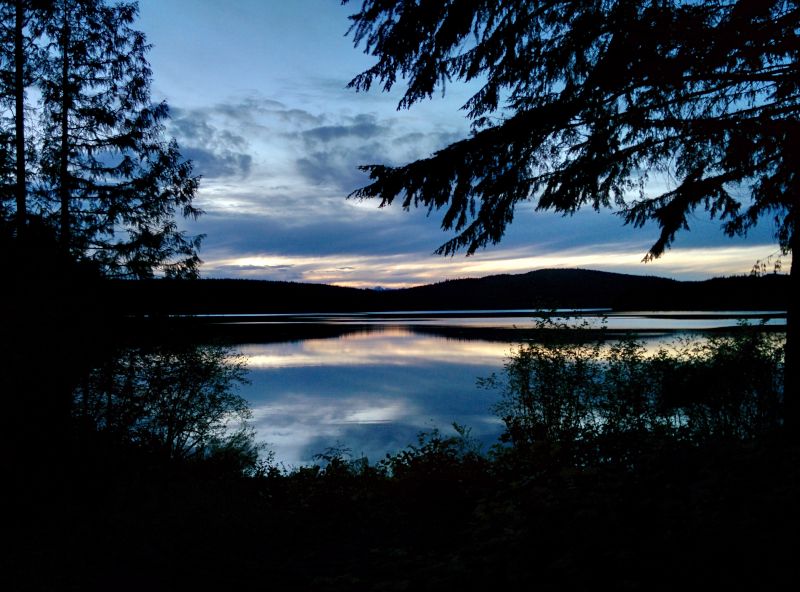 Next day was the return to Campbell River. Larry and Richard wanted to be on the noon ferry out of Nanaimo, so this was a short day. We had breakfast in Campbell River, and crossed paths with my uncle again.

I picked up the “day pack” panniers I had bought a while back from David and headed south. I wanted to avoid much of the 120 km/hr inland highway, as I’m just not comfortable running the DRZ at 6000+ RPM for extended periods. David said the TCAT followed a path that didn’t cross the highway, so instead of running straight (back) down Duncan Bay mainline, I explored a bit. I thought I was following a track on the GPS, but that lead me up onto the shoulder of Mt Washington where I got stopped by a decommissioned bridge, a bad washout (very steep banks), and snow. Finally I just backtracked to the last big logging road and followed what was probably the TCAT path back (SE) to Duncan Bay main. Another stop in Courtenay for food/gas, and down the highway (yuck). I turned off at the Cook Creek FSR, which I had ridden before. The Horne Lake end (south end) is beautiful.

David had asked if I had ridden the Port Alberni connection from Cook Creek. I had not, so I tried it.

There must be a better way out on the far side, because the route I took included one truly nasty section that I doubt I could get the DRZ back up. Looking at the track, I probably should have gone south near Lacy Lake.

I didn’t think I had the time or energy to run south through nitinat/lake cowichan again, so the real highway grind started. There was a very strong westerly blowing, which didn’t make the ride any more comfortable. I did take a last off-road detour and ran through the Mt Wood area. I even did the single-track, as I wanted to see what the bike felt like in hard/tight conditions with the luggage on. I did find I had to shift my weight forward due to the weight behind me, but otherwise, it was pretty good. And I can’t really say where the luggage experience the most wear and tear, but it certainly survived the run up the powerlines.

From there I ran through the water trail and straight south, which apparently was fortunate, as the next day I was told our normal exit had been blocked. From there it was an relatively easy 30-40 minute ride home.