Mike Ryan organized a big gathering for a camping weekend. In theory there were 20 campsites, most with 2 tents, and some tents having more than one occupant. Lots of people, lots of bikes, lots of fun.

Sorry, I really didn’t take much in the line of campsite pictures. Looking at Larry’s pix from the previous weekend, I’ve gotten out of the habit of taking people pictures :( . From my point of view, the weekend was about meeting people, and while I could/should have mixed more, I did meet a lot of folks.

The group ride basically went in on the end of Howie Rd (new entrance to me, and not a trivial one), then down through the normal Riverside Rd entrance, by Burnt Bridge, and up to Wild Deer Lake. Then up to Holt and along a side road, leading to Skutz Falls Main near its start. From there it was straight up Skutz to the town of Lake Cowichan for gas and food. I split with the group there and run back to Hill 60 FSR. From there I ended up going NE toward the power-lines that are often accessed from Hillcrest Rd… in fact I came over a crest and ran across the “bridge” that we declined to cross when riding with Tony, Bob, and Rick in early 2016. There was a neat “Upper Loop” track that felt awfully enduro’ish. It was open enough that you could ride it pretty quick, but rough enough that the bike spent a fair bit of time off the ground… and quite a few cross ditches just to make things even more interesting. Not sure if I shot much/any video of it. The entrance I used was _not_ a good one (steep washed out climb)… but there are alternate approaches.

The general goal was to head east or north-east. I knew there had been a cross-roads that I had passed on a previous run through the area, so after some exploring I found myself to the NW at said cross-roads. This led to the powerlines across some roads that were both good and bad. They were better than the other roads (closer to Hill 60) in some spots, but might have been more travelled as they were badly washed out in places. I’d think hard before taking an 800 through there (easier going east). One of the creeks was very nice, a bit of a shale crossing. 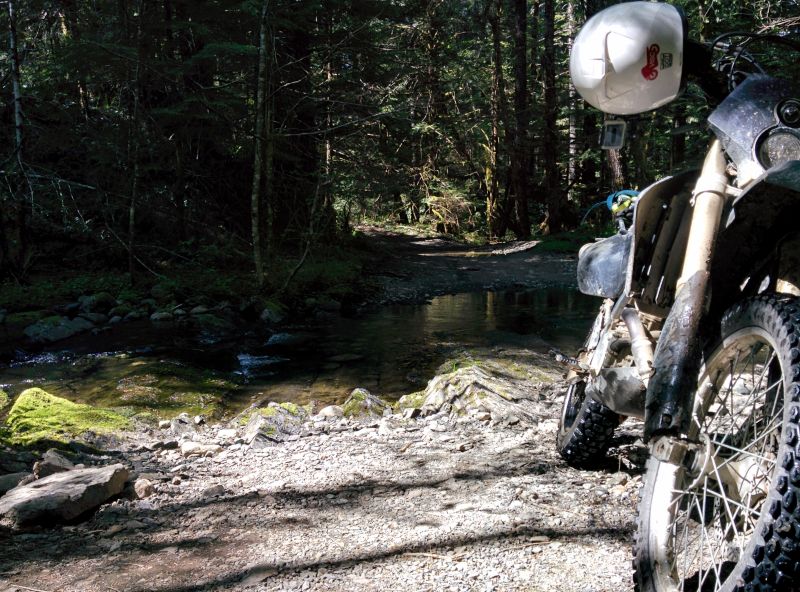 While riding in the powerline area, I got tangled in a tree… or more specifically the go-pro did. Between that ouch, the heat, and the not-great-sleep from the night before, I basically decided to cut the day short and run back to the campsite. Not sure if I caught something, but my stomache hasn’t been all that happy for the last few days.

It would seem I tried to find the “northwest passage” the next day. It had sounded to me like Chris and Joel had gotten from the koksilah river area (eagle * roads) to K-line without going up to Holt main, but if they did, I have no idea how they did it. I rode about 80 km scouting the area, and didn’t find anything that looked like it would work.  Looking back, there was a track or two I wish I had explored (ESE of the new clearcut on Crescent), but Crescent follows closer to the river than I had thought.