Steve Noon was asking questions about a SW Vancouver Island ride, and then asked for folks to join him…

His route was going to take him down Caycuse main, and I’ve been wanting to get up there to explore for quite a while, so I made plans to join him. We caught up in Sooke, had a snack at Whiffen Spit, and then bee-lined it for Port Renfrew, where we stopped at a tourist trap for lunch, and beer. From there to look for a campsite. We checked out the bridge at the end of Lens (which looked good), and then the San Juan rec site, partly because Steve wanted to see the big (dead) Sitka Spruce. That site was empty and looked good. It was still early, so stashed some of our gear, and rode in to see the Red Creek Fir. (I just about ran over a baby black bear that darted out onto the road about two bike lengths in front of me, no video, sorry.) 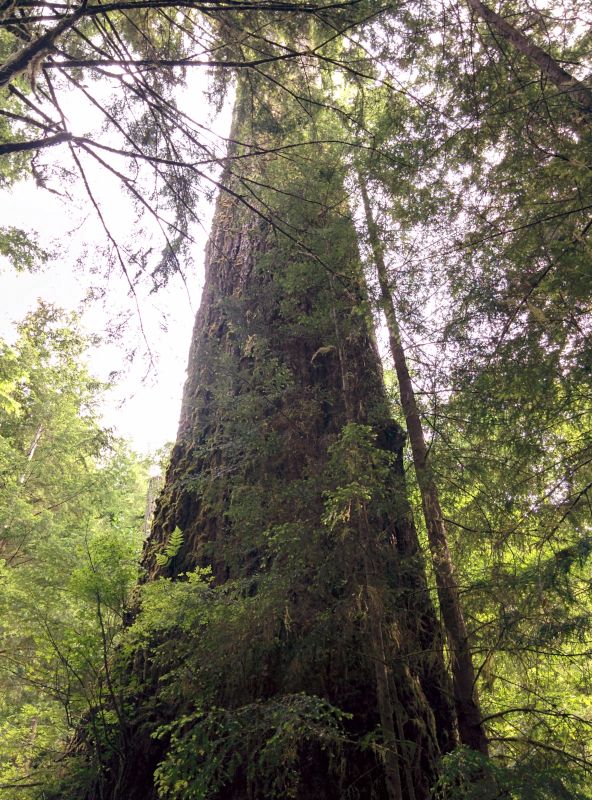 That was a neat site to visit. Had a little trouble finding the trail, which is stupid, as OSM had the trail shown, I just didn’t zoom in far enough to see it on the GPS or the phone.

We rode back to the San Juan rec site and got a bit of a shock, it was just about full, just one site left (thankfully). I had thought the place would be bad for bugs, but it wasn’t as bad as I expected. And having a river to bathe in is nice, and it was not stinking hot either. In fact it was cold riding to Lake Cowichan the next day.

That was a pretty good evening, Steve was good enough company that we didn’t take up the invite to join the other fires.

I didn’t sleep well, so gave Steve a bit of surprise when he poked his head out of the tent in the morning and I was already finished breakfast. I feel like I ended up rushing him through the morning (sorry). I knew I had some significant mileage I wanted to cover up the Caycuse River area, so I did not want to lounge around that morning. As it was we were out of the campsite shortly after 8am.

The ride to Lake Cowichan along the pacific marine route was nice. There were clouds on the top of the peaks, and beautiful rivers below, with a nice winding road and fairly light traffic. Unfortunately I must have left the gopro on the day before because the (first) battery was dead.

We got gas and Subway sandwiches in Lake Cowichan, then headed back up South Shore for Caycuse Main. About 10km down there is where McClure Main splits off and we said our good-byes.

A couple years back, google maps sent me down Caycuse main (in a minivan) when I was trying to get to Nitinat to go windsurfing. It didn’t go well, and while I can be pissed at google maps, it really was my own fault for not preparing properly. It was one of those days where I just decided to “up and go”, and I didn’t have the maps or GPS I should have had. I had since explored the far end of Caycuse and determined that it does NOT go through. What I wanted to do was try to retrace my route in the van. I remember the scenery being very nice, and it was certainly “an adventure”. The van turned out to be a fair bit more capable than I expected, but with the exception of one washed out downhill section that I didn’t dare try, all the tracks faded into single track or dead ended. So, I wanted to go back :)

Unfortunately, the mainline has been deactivated a good 5 or 10 km ahead of where I thought I’d gotten to in the van :(

I had already done some exploring at that point, as I had taken one of the southern forks to see if the bridge across the Caycuse river was still there. It was, and I got a treat. They were using the bridge deck as a helicopter landing pad for flying fallers in and out and the guys waiting there told me the helicopter was on its way in… so I backed up a bit and filmed it from what seemed like only a few feet (50?) away. It has been a long time since I’ve seen a flying helicopter up close.

Anyhow, my mood took a bit of a downturn when I found the caycuse bridge out. I continued to explore, and sort of wound my way back out to where McClure splits off.

The other concrete goal I had for this trip was to check out the “far end” of a track we had explored last year. At that point we’d been on some challenging track and were running out of daylight. Turns out that track did connect to Caycuse Main, and we probably had already ridden the hardest part, or stopped at the hardest part. Bob dropped the V-strom at a sharp (blind), uphill corner where a washout means you have to cut from the left side to the right side through the washout. If you know it is there, it isn’t too bad. If you do get that far, that, and the next hundred yards are basically the end of the tough bits. The rest of the connection to Caycuse is pretty flat, although there are a couple hundred meters where water is clearly running on the trail and the narrow dual track goes from good to “not good” condition.

I chased a big Black Bear off the track around where the above shot is taken, and I seemed to have gotten stung by a bumble bee at the stop when I took this shot (and changed gopro batteries again… yup, still no bear video).

I did a little more exploring of that offshoot (C5/Caycuse 5000) off of Caycuse. I stopped at this viewpoint,

I sat here looking at the view for a bit. It was around 5pm and time to make plans for the night. I either needed to find a campsite, or bee-line back to Victoria (before dark) as my new tail-light had not yet arrived. A couple ideas ran through my head, including camping at the Nixon Creek rec site as I thought I had seen it before (but I think I had it mixed up with something else). There was also a “Renfrew Connector” road I wanted to check out.

I got to the Nixon Creek rec site, and it was very nice. The only gotcha was that it was fairly windy (15-20 mph) and I’d have only been 30 feet from the water, so the wind would have blown right through the camp. I had a quick walk about, and talked to a fellow camping there. In the end I decided to run for home… there were lots of tasks to be done, and I wasn’t keen on camping alone.

Hopefully I’ll get some of the video put together.