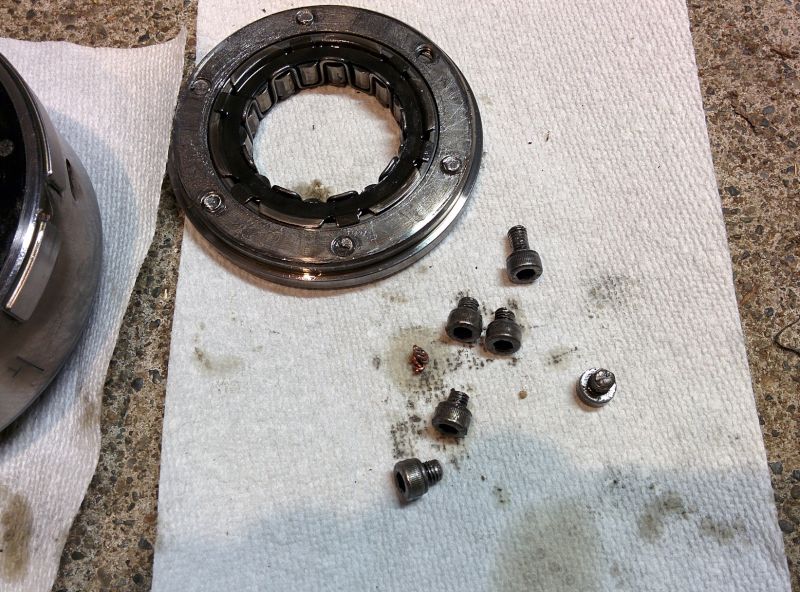 So, it happened again … the starter clutch bolts ate the stator, and left me stranded without enough voltage to run the ignition system. My fault, I knew I needed to check the linkage between the starter and the flywheel, but I’d been getting pretty anxious.

I don’t normally thing of myself suffering from anxiety. But maybe looking back, what I’ve called stress isn’t all stress. Anyhow, it was pretty clear I was getting uncomfortable having the bike in pieces, and a long list of things I wanted to do … so I basically did the minimum to put it back together, and then of course I had to ride it.

I did a test ride around the local roads, and ran across town on errands, but it failed when I took it out for a “real” ride (e.g. offroad up in Mt wood). I stalled the bike on a climb, and it didn’t want to run the starter. Either something in the linkage was jammed or there wasn’t enough juice. So I turned the bike around and bump started it down the trail. Found a level spot and had a look to see if I’d failed to plug the stator in or something like that. No luck, so I basically bee-lined it for pavement and home. That meant I came out via Fern ridge and had a longer route home, but it also meant no technical stuff that would have risked stalling, and put me back on pavement where I could recover the bike with the van if needed. Well, “needed” kicked in. Denna came and picked me up and helped me wrestle the bike into the van (front wheel off, it just fits with the SM forks… dirt bike was harder). Does take two to get the bike in without a ramp and/or that wooden roller wheel I was using.

Last time the problem was the bolts working loose, this time I had thread-locked them, and they simply broke off.

(Edit: Not sure that is accurate, it seems clear the one bolt that broke farther down had worked loose. Edit #2: Yeah, cut some slots in the bolts with a dremel and they came out easily. No sign of locktite. Wouldn’t dream of that now, but it is easy to forget how much I’ve learned in the last year and how DRZ ignorant I was.)

If things were “right”, the friction between the starter-clutch and the flywheel would be enough to keep the starter-clutch moving exactly with the flywheel… but the fact that this failure is common with DRZs suggests that it isn’t. I’ve now had the issue twice, and it’s clearly happened on the spare bottom end I bought, and I’ve seen more than a few pix of flywheels that have the same markings inside them from those bolt heads bouncing around (they are trapped inside the flywheel by the stator).

I’m pretty sure that a major contributing factor is that the holes in the flywheel are significantly oversize, so the bolts span a 4mm “air gap”. The wear patterns on the bolts and the flywheel holes clearly indicate that the starter-clutch is sliding on the flywheel, and the bolts are flexing back and forth in the oversize holes.

I am damn sure I used a torque wrench when I put the starter-clutch on the bike, but it seems clear that the 10 Nm of torque  didn’t apply enough clamping force to hold the starter-clutch steady. Thus I will chase down some M6 x 16mm bolts of grade 12.9 and slightly over-tighten them. I may roughen the respective surfaces a little too.

Unfortunately I can’t really think of anything else to do… beyond welding up up the holes in the flywheel and re-drilling them, but I’m no machinist. I suppose one could weld or glue the starter clutch to the flywheel… or maybe drill out the starter clutch and tap for M7 bolts so a little more force can be applied? Assuming one can find high-grade M7 bolts.

Lots more images in the gallery.