I haven’t been entirely happy with the sound of the bike since I put the new rings in. Not sure if it is just normal valve noise, or if I botched something. (edit: not enough cam chain tension.) But the forecast said we were going to get one nice day, so despite having something of a cold, I loaded the bike and went for a ride in west sooke.

If there was a goal, it was to see what had changed, and top of the priority list would (always) be the entrances and exits. So, in via Clark Rd and out via the Anderson Rd “by-pass”… those were unchanged, although the big (74 acre?) parcel that the Clark entrance runs through is now marked as sold !?

I noticed some survey tape on a track that wasn’t shown on the GPS, so checked that out and mapped it (“T3000 – 1km” to “Old Trk”). Nice, but some dweeb left a mess of an old campsite at the far end.

From there it was continuing NE toward the Tugwell Spur. This is climbing a small peak. Turns out I had been there 18 months back on the KLR (heck of a ride that day, first try at what became “Luke’s Trail”, and “Krashed KLR”). At that point the crest of the hill still had trees on it, now it is clear cut… which makes it a great VIEWPOINT. 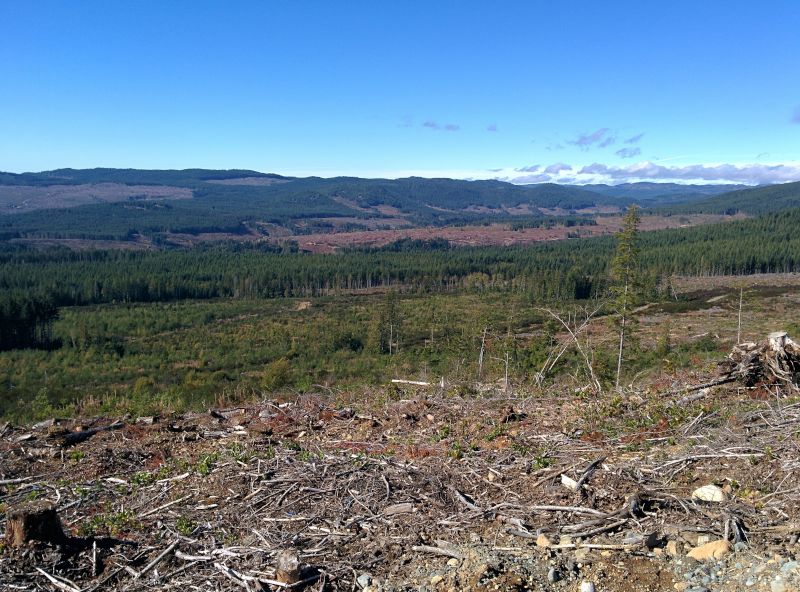 Continued N to the tugwell spur. Stopped to check out the little loop connector that is a separate connection to the Tugwell Spur. It has been pretty badly blocked with slash, but one or two bikes have passed, and it looks like I could get the DRZ through it if I had to.  Left a little stick standing to mark the entrance/start.

The “official plan” was supposed to be to run from Clark to the fishboat bay exit, so it was west on the spur to Luke’s Trail, and down to the Muir Creek crossing, across Muir and over to Kirby Main. I got that far before getting distracted again.

I’ve been up Kirby main multiple times, but it has been changing, and my last few attempts were blocked by snow. So I finally made it to the end of Kirby Main, and found a neat narrow single track trail at the end (Big Rock Trail), it seems to loop around and come back parallel to Kirby Main, but unfortunately it parallels the falling boundary at one point and there was just too many blow-downs across the trail to continue. 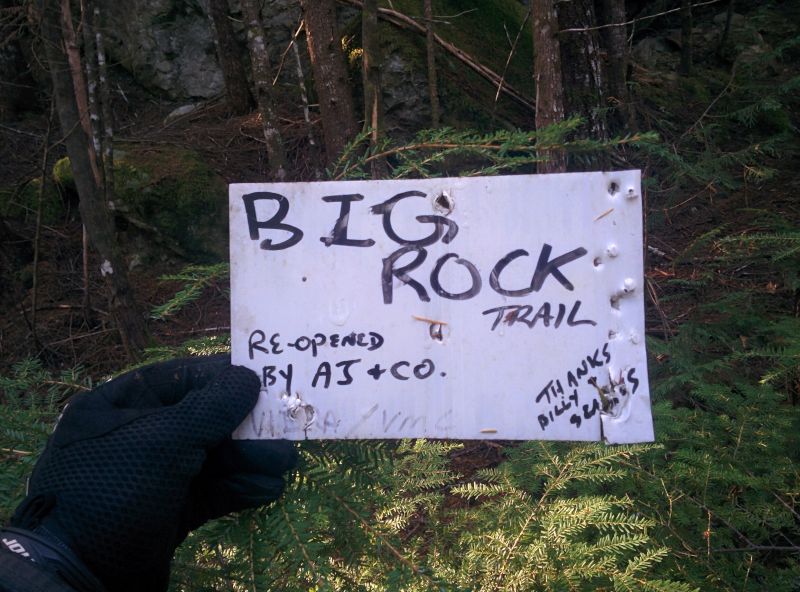 So I re-wound my route back to a fork off of Kirby Main that appeared to be the very old Enduro B loop that Don Hatton had published. Again, I had tried that twice last winter and gotten blocked by snow. That does connect just fine, although that area is a maze of tracks, and there’s a reasonably nasty rock garden in the middle.

From there I basically decided to wander home. It was getting too late to do the distance to the Fishboat Bay exit, so I re-ran some single track I had done with Francois and mapped a few more roads down by Muir Creek.

Then it was across the creek and pretty much a bee-line for the Anderson Rd “bypass” exit.