A Saturday bus-ride up to Campbell River, get the ownership/insurance sorted out, overnight at David’s, and follow David around the local backroads for 200+ km. Then ride back to Victoria.

I’ve been considering getting a 640 Adventure for a long time. David Williams makes a very good champion for the model, and the spec’s speak well too. I love the DRZ, but it isn’t good at speed on the highway, and it is very cramped for 2-up riding.

David had 3 of 640’s, which is one more than he “needed”. The extra was supposed to have been sold last summer, but that got canceled when he found a cracked shock mount. Then he figured out how to fix that, so the bike was going back up for sale, and he had a prospective buyer. I let him know I’d be happy to take it, so I got 2nd place in line. The 1st place buyer had something fall through with respect to financing, so it was my turn…

One thing about having to wait in line, you get plenty of time to make up your mind, and this was a no brainer. My youngest (15) seems to want to travel/adventure with me, and I’d be an idiot not to take her up on it before she changes her mind. But that requires a bigger bike than the DRZ. The other factor was that David is planning a ride up to Tuktoyaktuk this summer, and I wasn’t comfortable taking the DRZ over all those highway miles.

The logical choice of bikes was a 640, as David has said they are very competent at carrying heavier loads. Unfortunately, they are not a common bike, so there wasn’t a large number to pick from. When the possibility of getting one from David came up, it made too much sense to seriously consider the others. David gave me a great price, and I knew the amount of work he put into the bike. Quoting one of David’s facebook posts.

“The one I sold to Tom was an 03 with 21,000 KM on it… The engine was good but the bike was jetted way too rich… This made for poor starting as to where it wore on the starting circuit and even the Auto decomp was non functional as to where I had to replace the cam to revive it.. The rear suspension linkage had never seen a service so I ended up replacing the works, including the swing arm and shock… The forks had never been serviced and were completely sacked.. I tore them down, freed up seized rebound needles, changed the filthy fluid and added heavier springs.. With the suspension work the bike went from a sacked 34″- 35″ seat height back to the stock 37″+ .. The steering bearings were also crying for grease too..”

That said, I’m having some trouble starting it. I’m not convinced that there was a problem with the auto-decompression, as the engine sometimes will not turn over even after the cam was changed… like the problem didn’t go away. Yes, using the manual decompression usually is enough to get it to turn over and sometimes it will catch. A combination of using the kick-start and the e-start seems to work (with persistence). I’m waiting on a flywheel remover before going in to check on the health of the starter/sprag clutch.

The headlights need to be changed/upgraded, and there may be either some fuses to be replaced or wiring to chase down. David didn’t have time to go over everything, and I don’t mind chasing wiring issues, it’s one area I might be nearly his equal.

But the real reason for this post was to show off some of the pictures David took. The Campbell River area has so many lakes it isn’t fair. We went from one beautiful lake to another. Many of them were mirror smooth and reflecting snow covered peaks. 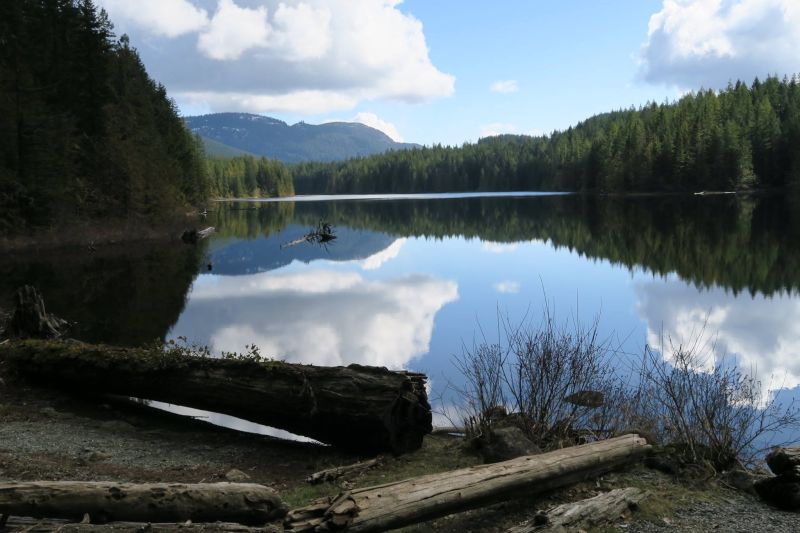 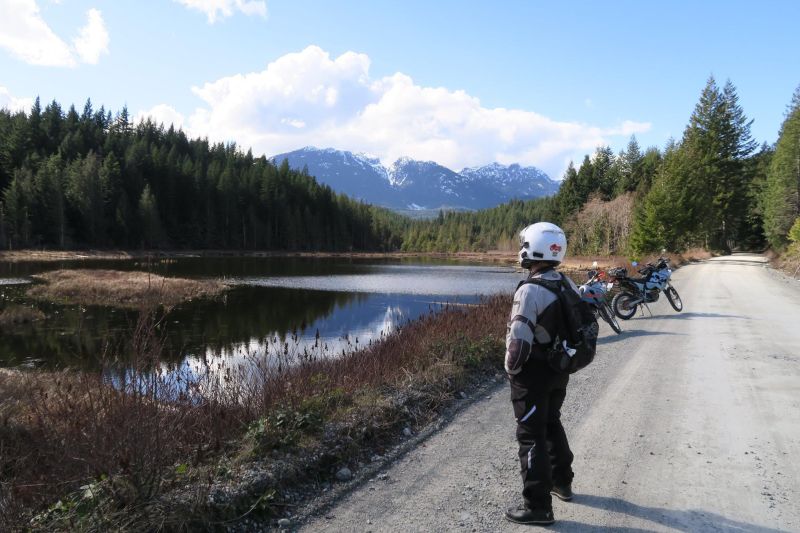