Bob wanted to get out for a ride, and the forecast looks to get worse for the rest of the week, and I have a new bike I’d like to ride, and there was a new track I wanted to explore, etc.

… well I crossed all those off except for riding the 640. The planned entrance was an uphill section under a gate, so I took the DRZ … it probably worked out for the best. Nice thing about this ride is that I think it is Crown land… although the north end of the track would be very close to the edge of the railroad grant.

Something odd showed up when we looked at the trail to the south. There is this narrow band of trees, then when you first see it (coming in from the SE), appears to be a strip of trees along the creek. When you get closer you see it is a very narrow strip of trees, and it ends before the creek. It turns out that for some reason the trail is protected, and they didn’t log it, despite leaving NO protection for Jacob Creek.

I did a quick run down the trail to the south. Bob didn’t want to try the entrance so I didn’t waste much time. I turned back about 250m in when there was a reasonably big tree (8+ inches) across the track and suspended in the air.

It turned out to be a good thing I didn’t waste any time as Bob thought I’d gone North up the track, and proceeded ahead of me. I saw his tire marks and guessed he’d gone up the trail, but got a little confused when I ran across what appeared to be more than one fresh set of time marks. Anyhow, I did catch up to him where he got stuck on a log (which we later cleared off the track).

We ran north up the trail to where the broom started to get thick and then turned around. I wanted to scout the left hand spur (to the NW). It led down to a creek (not Jacob, it is flowing the wrong way :) and a bit of a nasty climb up the other side. The video below was supposed to be me going up that climb, but I didn’t wait long enough for Bob to get into position, so instead he recorded the descent. He did say the ascent was more dramatic, but that might have been something to do with having 500 pounds of bike and rider under dubious control chasing him up the hill :) I scouted the trail for a bit, but since I’d left Bob behind I didn’t want to go very far.

Anyhow, the important bit of this post is that the trail continued to the NW. Now that I have it on the big screen, it is possible it connects to Kirby Main via the “Big Rock” trail… but I doubt it. This track appeared to be under mild ATV use, and the Big Rock trail was both too narrow for ATVs and blocked by multiple windfalls (it parallels the edge of a clearcut).

On the other hand, the only “level” destination is Kirby Main (N / NE. The contour maps suggest it would get pretty steep if it continued to the NW. Still, it needs to be explored, that’s where the adventure is :) (TODO). And competent riders on offroad bikes (but NOT solo) can do the loop back to the Matterhorn if this track dead-ends. 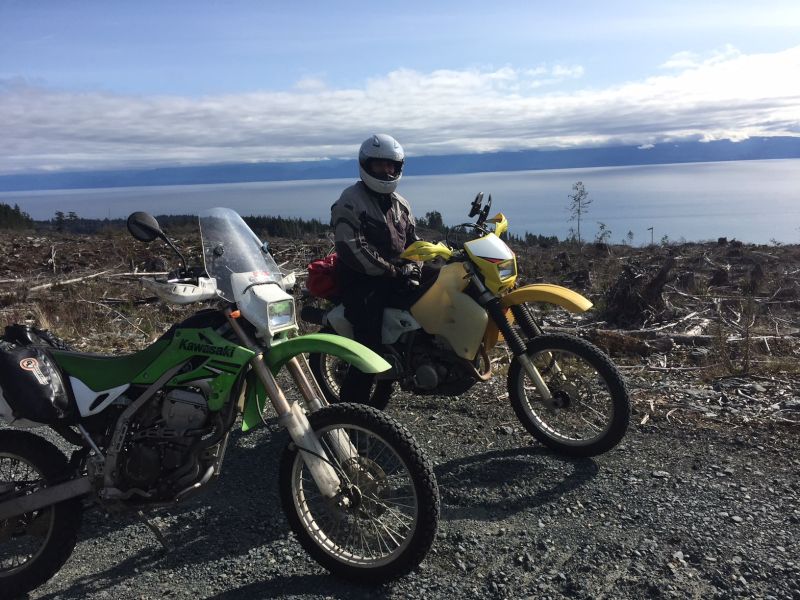 On another note, we ran across another pink “B 15” tag (on the main trail) that seemed to be part of an Enduro course. James and I found BR 15 tags on the other side of Kirby Main. It isn’t hard to guess how the course could have connected those points (via the creek I wanted to try crossing with the rescue system).

p.s. the obvious SE exit from the neat trail seems heavily overgrown, at least from the road end.

p.s. It looks like the NE end of Kirby main is pretty much the edge of the railway grant. It doesn’t show in google maps, but in google earth the big clearcut shows, and the SE edge appears to be on a line straight from the mouth of Muir Creek, which _is_ supposed to be the railway grant starting point. There is at least one more cut line which seems to be on that line (but from the crown side).

p.s. The snow certainly seems to be retreating. It wasn’t a problem 9 days ago, but it was present. Today it was hard to find.