Boring … 3+ hours to Campbell River and then back again …. NOT!

It was supposed to be a routine ride up to visit David W to do an hours work on the bike (starter clutch) and return. Yeah! Didn’t work out like that LOL! The trip started off normal enough. I wasn’t planning to get there until 5pm at the earliest, and I left early so I could make some side trips and just enjoy the ride…

I’ve ridden past Kinsol Trestle dozens of times, but never actually gone to see it. It’s a fair walk from the official parking lot. Much quicker if you’re riding off of Riverside (on the north side of the river).

A quick check of the tides had said that Rathtrevor beach in Parksville might look a little more impressive than it did the list time I was there (at high tide). It was nice, but not enough to take off my boots and walk or play on it (but the weather had something to do with that).

Then the “fun” started.

Shortly after getting back onto the new 120 km/hr highway (from Parksville), I realized that something was wrong when the bike wouldn’t maintain the speed limit. It seemed to sound ok, and idled fine… it was just that the last half of the throttle wasn’t doing anything. Given that I was headed to the local expert’s house, continuing seemed the logical thing to do.

Within a couple minutes, there was sudden further loss of power. On pulling over to the side of the highway, the bike seemed fine. It idled ok… perhaps the valves were a little louder? But even in neutral it wouldn’t rev past 4000 (no power).

I texted David, and he volunteered to come get me with a trailer. Damn, I had been trying to make this easy for him, and now he was going to be out at least two hours of driving time :(.

So I pushed the bike right off the edge of the pavement, and had a good look at things. There was a little wet spot where some coolant had leaked out.The oil level and color looked good, and no sign of white “smoke” from the exhaust. Getting under the bike and tracing the water back, it was just coming from the overflow (i.e. normal). I had a good look at the carb, but couldn’t find anything amiss. So I put my tools away, and got my lunch out … climbed up the bank a bit to get away from the highway in case some idiot came down the shoulder at 120.

I had at least 1.5 hours to kill, David had to finish work, then go home and get his trailer, then head south to get me. One thing I was lucky with, I’d been skirting rain clouds all day, but they stayed away from the breakdown site.

After eating, I read for a bit. Then I got cold when the sun started to go down, so I climbed up the bank and walked back parallel to the highway to check out some trails I had seen… while trying to keep an eye on the bike.

Soon I got a classic helicopter view of a cop pulling over a pickup truck… and they’re stopping right by my bike. No, he’s checking out my bike (not the truck). So headed quickly down the bank and jogged back to the bike/cop. An ambulance shows up with lights flashing. I had a cop, an ambulance and a fire chief (the truck) on site. Apparently someone (who didn’t bother to stop) called 911 and reported a motorcycle accident with a rider down in a strange position (up the bank… reading on my phone?). I was told there was a helicopter crew on standby in Vancouver.

The poor cop was half expecting to be the first on scene to a Saturday night motorcycle fatality. He was quite surprised to find the bike sitting on its kickstand – helmet on the handlebars, and me jogging down the road. I should have taken a picture, but I was too embarrassed. I asked him what I could have done to avoid this false alert and all he could suggest was “turning on your four way flashers”. The bike doesn’t have a hazard setting, and I have to have the ignition and headlight on to get the turn signals to work. Given the 1.5 to 2 hour wait, that would have been a very dead battery. He did point out that a fair bit depends on the 911 dispatcher… the wrong leading questions can “turn a mouse in a kitchen into a wild animal threatening your safety”. After explaining more than once that the bike had lost power, and I had a friend coming with a trailer (and that I had not run out of gas, that I did have a charged cell phone, etc… basically that it was safe to leave me) … my visitors went back to their normal tasks.

A few minutes after that David arrived. With a minimum of fuss the “adventure bike” was loaded onto the trailer and strapped down, and the journey north resumed.

… except that we were low on gas and some light related to the cooling system came on. Before we got to Cambell River we had stopped at a creek and topped up the coolant level, and then stopped again to move gas from the motorbike on the trailer to David’s vehicle.

With the trip to David’s place dealt with and a quick meal consumed, we went back to looking at the bike.

Firing it up at David’s place … it seemed obvious that the “valve noise” was quite a bit louder than it should have been. David took off the intake valve inspection cover and quickly found some issues.

The 640 (a single cylinder engine) has a single overhead cam with a pair of rocker arms that activate the four valves via tappets. One of the lock-nuts that keeps the tappets in place was missing. On closer examination, the “elephants foot” on the bottom of that tappet (which pushes the valve down) was broken off. So that intake valve simply wasn’t opening. I may not have the order right here, there was another issue and I don’t remember if David figured it out before or after pulling the valve cover. It turned out that my lowish mileage engine had suffered the “not unusual” 640 problem — the intake cam bearing had failed. The rocker arms follow the cam on one side, and pushes down on the valves on the other side. KTM put bearings on the side that follows the cam profile to reduce wear. The bearing on the intake cam is smaller than the one on the exhaust, and is know to be a weak spot that can fail. It had failed completely. The needle bearings from inside it were “gone” and as a consequence there was at least a few millimeters of slack where clearances were supposed to be a fraction of a millimeter. No wonder the valves didn’t sound right!

With the valve cover off, we found that the missing lock-nut had not gone far, and a lot of the debris that had been the needle bearings was still on top of the cylinder head. David, being “the 640 man”, had the required parts on hand… and the skill to put them together. He had the valve cover back on the engine and the sealant curing within two hours of starting the diagnosis. There was more to do (cleaning, and the original task), but it was left for the morning. 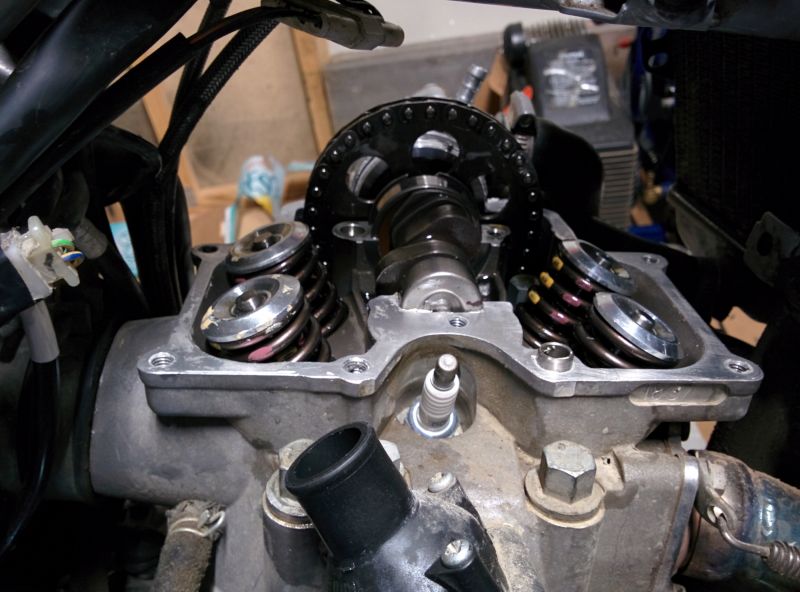 The morning’s work started with draining the oil (coolant was done previously), then pulling the clutch side cover and looking for debris (bits of metal from the roller bearings). Very little appeared to have moved down. That cover went back on and we moved to the other side, where the second oil filter and flywheel live. The starter clutch is mounted on the inside of the flywheel. The stator is mounted to the cover which covers the flywheel, so the cover on that side of the engine is usually called the stator cover. It had to come off, and then the flywheel removed to get to the starter clutch. That was done, and some trouble with the starter clutch not sitting in the correct position was found, parts were replaced, and in time it all got put back together again. (Yes, it was starting to blur by this point. :)

In the middle of this, Chris and Jackie (spelling? friends from previous rides) had come up to retrieve an engine that David had rebuilt, and we all went for brunch (Kandi too).

After the bike was back together, David escorted me most of the way to Courtenay via the logging roads. A final check over the bike seemed to be mostly good. David noticed an issue with the gas tank that I will need to fix, but otherwise things seemed good… no troubles from the recent work.

He headed home (north) and I started the rest of the grind back to Victoria. And it was a grind.

It was cold, even with the jacket liner, balaclava, heated grips, etc. None of the showers I hit were enough to make me wet, but the road was wet in spots, and by the time I got clear of nanaimo it was dark… which is a bad combination as the cars kick up the wet grime off the road, but there isn’t enough water to wash it clear of your visor, and it just smears if you try to rub it off… and trying to see through it with headlight glare doesn’t work very well.

One of my planned stops on the way up with the Courtney / Comox info center to get some pix of the snowbirds jet. Instead I checked out it going south. 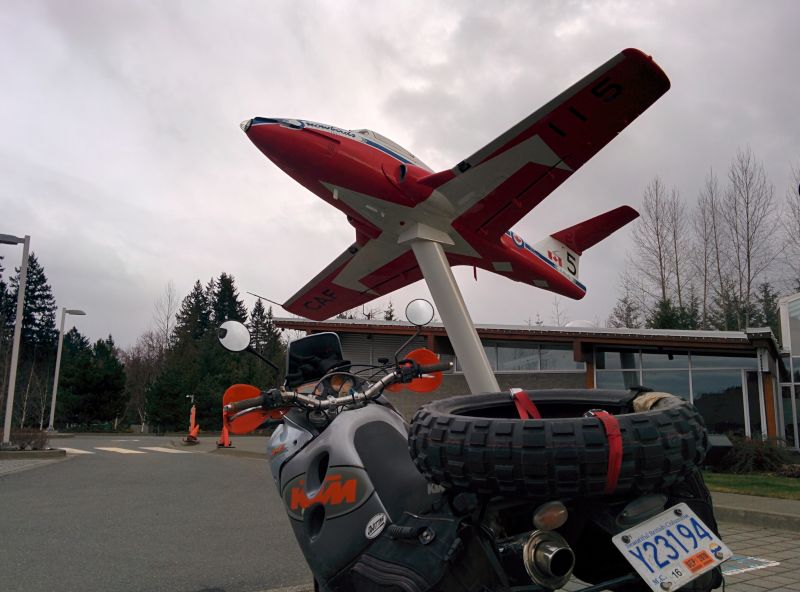 I stopped for a coffee and snack in Nanaimo (to warm up), and very shortly after getting back on the highway I had to pull over again. My front tire was completely flat. Fortunately it wasn’t dark yet, and I don’t generally get on an adventure bike without tools, which include a patch kit, spare tube, and a bicycle pump. I have no idea what caused the puncture, nor did I find the hole in the tube… it seemed to hold air, but there was no question that it had gone very flat pretty quickly. Anyhow, I swapped in the spare tube, and (after a couple tries) found a gas station with a functioning air pump to get real pressure in the tire. From there it was just routine with a few stops at gas stations to clean off my visor.

No-one wants their engine to fail like that, but to a large degree it was almost the best way it could have happened. I’m not happy that David was forced to rescue me, nor that an hours work (starter clutch) blew up into something like 8 hours of his time. But I can’t overlook that I got a guided tour through a large fraction of the engine’s internals with narration from a mechanic who knows this engine inside out. That was worth real money. And the breakdown happened on a major highway on a routine “commute”, not in the middle of no-where interrupting some carefully planned trek.

All in all, a hell of trip for what was supposed to be a boring ride to Campbell River and back. A massive thank you to David, another to David’s wife Kandi, and one for the first responders that got called out on a false alarm.