I wanted to put some miles on the 640. The 640 is a darn capable bike, but it is bigger, heavier, and more expensive to fix than the DRZ, all of which means I wanted a somewhat easier track.

I posted an invite on Facebook, but no takers. James and I rode out and took a leisurely route north, entered via Mt Prevost Rd, and basically bee-lined it to the old mine site through the back route… as I really wanted to re-ride that section from Mt Sicker Main to the mine-site.

We explored around the mine sites a bit. Must have gone right next to one of the few open adits (Lenora #2?) without seeing it. We paused for a break on some foundations, and noticed that my tank repair on the 640 was leaking… so we made tentative plans to “explore less” and head homewards. We a little more, found what I thought was a tailings pond, but apparently was “In 1967 an attempt was made to extract copper from dump material by heap leaching but it did not prove feasible.” It’s a good little riding area with some steep walls and surprisingly good traction (considering it all looks like clay). Of course I may find the bike disolving shortly, modern descriptions of heap leaching seem to use strong acids.

After that we wandered back towards the entrance, I wanted to show James some of the stuff I didn’t/couldn’t ride (and did)… and we ran into some guys with metal detectors trying to find artifacts from the old townsite. Jame’s dad actually wrote one of the definitive pamphlets on the area, and one of these guys had a signed copy of that book/pamphlet. (40 pages, is it a book?) Anyhow, that led to a few minutes interesting discussion. Up to said difficult spots, and then down to the SE toward Hillcrest and a decision as to whether to go home or not.

I stopped to get a look at the view on one corner, and James made a fuss about the tank, which I had noticed was actually spraying a fine stream of gas (not just dripping). Poking at it, it was clear that a little sideways pressure on the tank closed the crack up very well. One false start, a couple zap straps and a chunk of rubber later, the tank was barely even dripping. And James took this moment to serve the first course of chicken from his exhaust header heated oven. 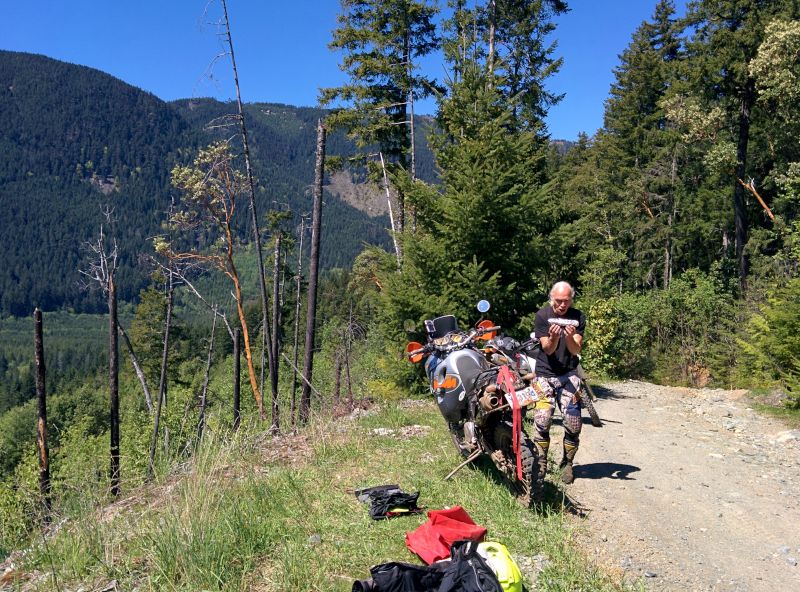 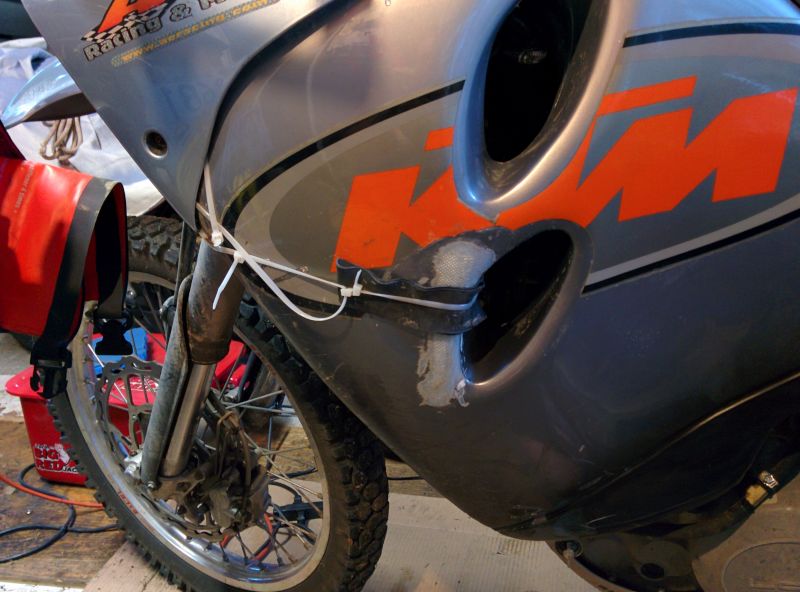 From there we retraced one of my traces from last summer… which took us west along the south side of the Chemainus river. A trickier descent down to a neat watering hole got us a few nice pictures, and hopefully I got some good video coming back up. 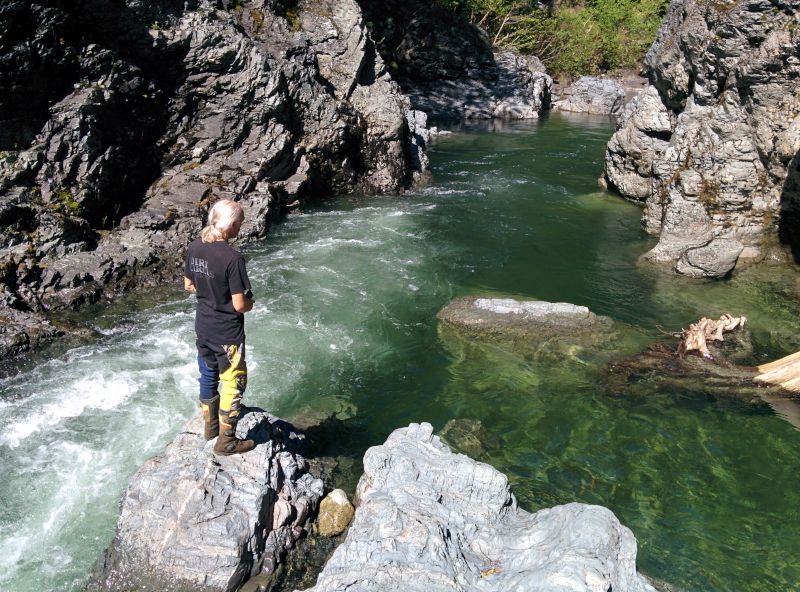 From there we continued up the track, taking the signed route to hill 60, a nice track. From the Hill 60 exit we followed a pretty round-a-bout track, including a gps mis-read at Hillcrest and the highway. We ended up on an overlook of the cowichan for the last serving of chicken.

From there it was backroads through shawnigan and the highway home. It felt like a long day, and I ended up with a pretty raw calf from chaffing. Obviously I move a little bit differently when riding the 640 through harder tracks.