I finally got enough ducks lined up that I could get out for a ride. Mike posted a picture that pointed out that Mt Waterloo is accessible, and I laid out some waypoints a couple weeks back for a possible route up the west side of San Juan river from Fleet to M-Line … which would drop me out pretty close to Mt Waterloo. It seemed like a plan.

The ride up to Shawnigan and out Kapoor was pretty much a non-event. I really do need to have a look at the carb on the 640, sometimes it behaves like it is running out of gas (for a few seconds, at idle/low power), and I had too much air in the rear tire.

The interesting part of the ride started when I turned off of fleet mainline and started climbing. The views there are stunning. 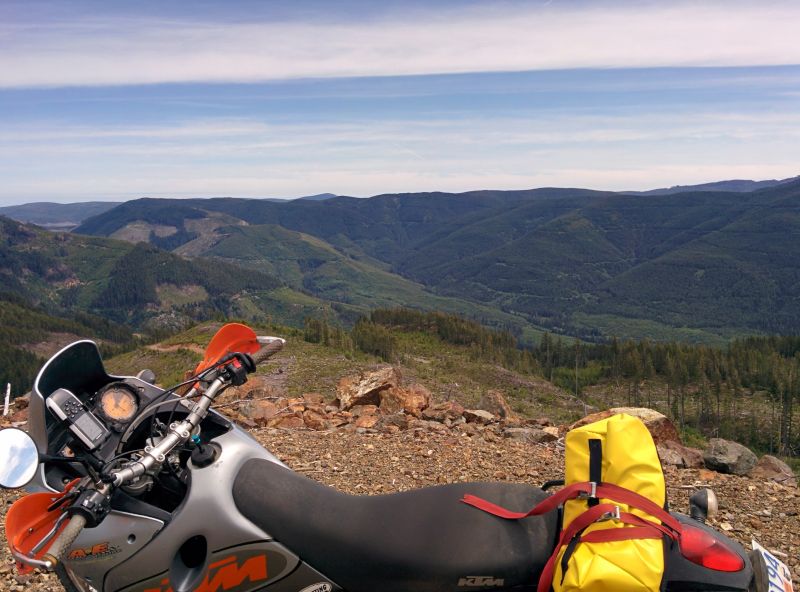 That shot show the edge of Todd Mountain on the left. Behind it Kapoor runs up the Clapp Creek valley to the left. The valley on the right is Fleedwood Creek. The lower San Juan River, Clapp Creek, and the lower Koksilah river all form a pretty much straight line right across Vancouver Island. The closing shot shows the view to the East, and (not shown) the view from Todd Mountain (or the other side of Clapp Creek) looks West down the San Juan valley.

There’s a big panorama that shows the full view, and the strangely flat roads(?) on the far side of the valley.

I’ve got _lots_ of video, but few stills. The climb up and through the peaks towards Fleet 600 is a great ride. There are some hard bits: washouts and steep climbs/descents, but as a rule, the roads are in great shape. I chased 3 bears off the road, I think I even have one or two on video.

The “road less travelled” started at the turn off of Fleet 600 (as I have the roads marked in OSM). I was glad that the next waypoint was known to OSM as there were some forks that could have been a challenge without a track to follow.

I got distracted at the next waypoint. There was a huge plugged culvert and half the road had slid away. It turns out they had braced the culvert and of course the braces caused logs and stuff to clog the culvert. I pulled some of it out, but the fix is probably to knock out the braces, now that there are no longer logging trucks running over it. Failing that, a chainsaw could cut out the plugged up logs easily enough.

After checking out the culvert, getting on the bike and resuming riding… I realized that the culvert was actually just _past_ my waypoint, and the track I was looking for paralleled the creek.

It was immediately clear that the track is not well travelled and had become badly overgrown. Keep in mind I’d been making good use of my folding saw already. Fortunately, someone had been through with a chainsaw and done a major clearing (probably 6 months or more ago). Looking back, they may also be the guys who lay some big logs down on that half collapsed road, which would suggest why they hadn’t cleared my inbound path to this point. Anyhow, it really wasn’t much of a challenge to follow the track they had cleared. I got side-tracked at one point as the GPS was trying to route me to the nearest road, and that was _not_ the track they had cleared… although there apparently were shorter routes, but quite washed out.

Most of that part of the story will need to be told in video, as it was just riding through the rough and remote track.

Once I got back to the OSM mapped track, things opened up and I didn’t need the saw anymore. The ride down to the bridge over the San-Juan (which is also the end of M-Line… I think), was good. I took a short detour to follow a neat looking track just past the bridge. It follows the river north and dumped me out on the track we used to get to Pete’s Pond. It was worth going the extra distance and coming back on the other track.

From there I checked out the lake in the middle of M-line, which has an entrance just past the Fellows mainline I had marked as my entrance to Mt Waterloo.

I have more video of the lake, including the campsite. Like most of the small lakes, it looked pretty shallow… and the campsite certainly didn’t inspire “wading”… the lake was very shallow and muddy there. Pretty, assuming the mosquitos aren’t too bad.!?

From there it was a short backtrack to Fellows main (at the 10km marker on M-Line). I should note that OSM was not helping me here. I’d loaded a few waypoints into the GPS based on satellite imagery. There’s a not-intuitive at the start of my explorations. I guess the road went straight at one point, and now it follows a slightly different line. I cleared the straight path before realizing my error :( With the waypoints, finding the new clearcut on the north side of Mt Waterloo was simple enough… but it didn’t get me to the top, and doesn’t seem to have gotten as high as Mike did. (I got to 880m.)

I mapped out the rest of the roads in that immediate area, but they were lower down. I then ran Fellows through to the already mapped areas on the NE side. From there I tried to get up to some of the higher sections, but it seems that the one I wanted was signed as “stay out, active road building”, and I skipped it. But perhaps there is a whole different route. Mike also said they came out on K-line near Holt … and there is a slew of roads showing in satellite imagery that aren’t in OSM. I checked a few things out, but was running pretty much blind (and out of time). I connected the some road sections that were not connected in OSM and I had noted that they should.

From there I had to make a decision, run north on K-line to holt and out through Duncan, or run down K-line, and ride around the gate which the logging co has so conveniently not blocked bikes from going around!? [It’s a strange gate too, as the logging companies don’t normally use internal gates. They gate the perimeter, but once inside, things are almost always open.]

I chose to go south because it would put me on pavement much closer to home and reduce the highway mileage, and also because I hadn’t actually ridden the south section of K-line before. That’s a nice ride. They are actively logging a few km from the gate, but otherwise it was a nice narrow logging road. I took the back path and then a wrong turn at the bridges on Kapoor. That lead to me finding a track to explore on the DRZ (later), and my re-visiting the viewpoint that Luke and I found a short while back. 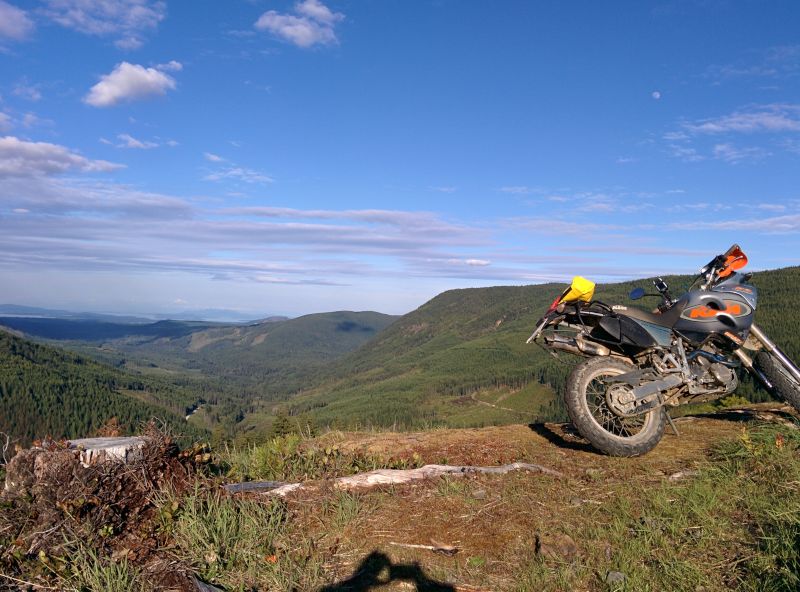 That image and/or my caption led to a discussion on Facebook which is when I came to realize that this is basically the high point in the rift I mentioned earlier. This is a hill a little N of the rift, but it gives a nice view down it.

Anyhow, that was pretty much it. The patch job on the 640 gas tank held up better than the previous one, but it leaked too. Looks like I need a _much bigger_ patch. So much for trying to save the decal on that side.