Another great ride. A bit wetter than previous years, but I probably needed that as a prelude to Tuktoyaktuk. I certainly won’t be taking the same pair of boots north.

James and I met up with Blake at the Westshore parkway Tim Hortons, and headed up island. We got to Campbell River early, and decided to just push on to the Woss campsite. Blake and James didn’t seem interested in following me off onto gravel, so it was highway the whole way. 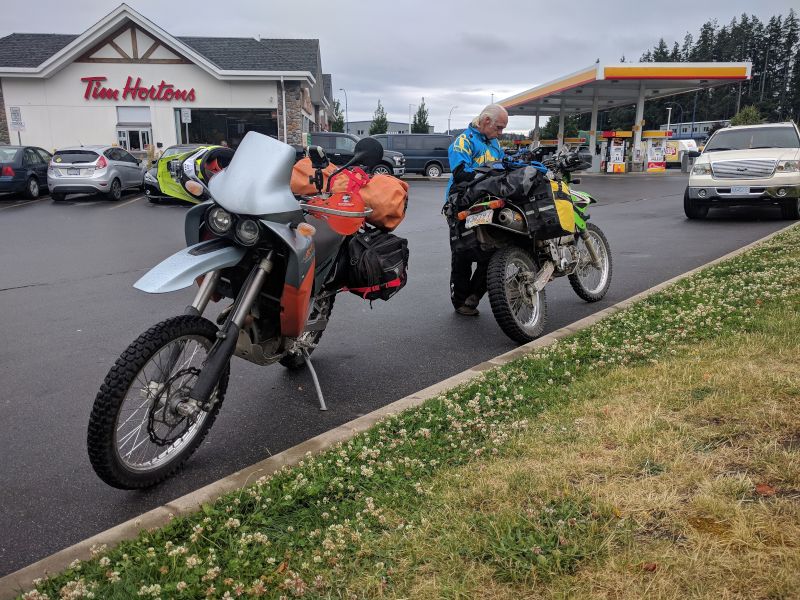 I believe everyone caught up to us in the campsite. David occasionally has folks meet in Woss on the Saturday morning, but instead we lost a few riders (Jay and Tara) then. That left us with Blake, Brent, Carson, Chris, David, Dean, James, Paul, Randy and myself. (Dennis joined us for the Saturday afternoon on Malcolm Island.)

Saturday, had us head through Port McNeill via a westerly track past Atluck and Maynard lakes. From there we took the ferry to Sointula, and rode to the campsite on the north side (down a slippery track). We rode the length of the island a bit later. 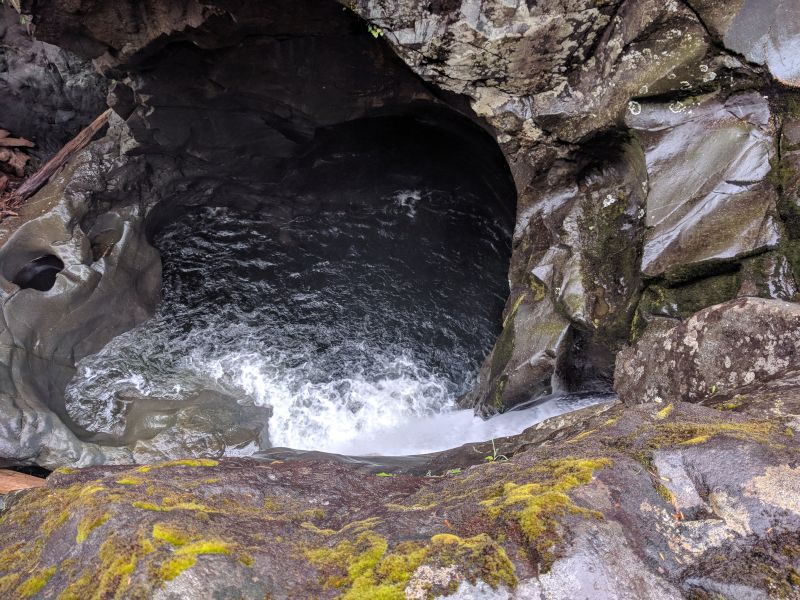 Sunday had us catch the ferry back to Port McNeill after a leisurely morning. Carson left us here. We headed south to Woss via the east side of Nimpkish Lake and David’s “Mountain Loop”. Weather in Port McNeill had been mixed sun and drizzle, but we hit some fairly serious rain before we got to the Mountain Loop (at which point it went back to cloudy and some misting). [SHOULD BE SOME VIDEO STILLS?] From Woss we continued south to Gold River for dinner. Much of this was done “at speed”. There was a bit of a communications snafu shortly before Gold River, which reminded me it is easy for even a small group to get split up. (I thought we were headed for the campsite, and would have preferred to do that. Others knew we were headed for Gold River, but the group went left and the signs said right. — In short, it was a long day.) The day ended at a “not to be shared online” campsite. I’m not usually a fan of keeping things secret, but that site is fairly small and quite “wild” (and I didn’t find it, so my opinion doesn’t count anyway). Blake split from us after the dinner in Gold River. 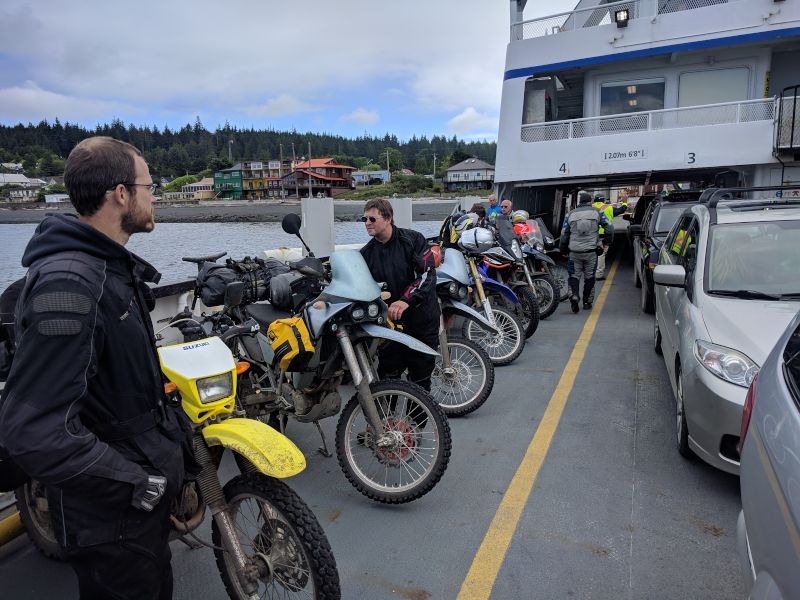 Paul left us in the early hours of Monday morning (before some of us woke up). Randy and Dean also split off, I think they chose to ride the highway home from Gold River.

Monday had us (Brent, Chris, David, James and myself) run NE toward Sayward, we took in the lookout over Sayward, and then stopped for lunch. After that it was highway to Campbell River. James and I went to David’s so I could grab some 640 parts from him. From there James and I had to decide whether to run for home, or take another night. I still wanted to explore connecting Cameron Main to Nitnat River Main, so we made vague plans to gas up in Fanny Bay, then head up Cook Creek FSR, then cutover toward Alberni,  and to the exploration. We got as far as a campsite on the FSR I had noted before and decided to call it a day.

From later the same day:

Tuesday had James and I cut through to Port Alberni and come out via Lucy Lake Road. I’m not going to say/show much more than that. Suffice to say it worked and cut out a lot of highway distance. A brief stop for a bowl of ice-cream and we were off heading back up the highway for Cameron Main.

We did manage to find the connection to Nitinat River road with only a few “unplanned side trips” (mis-reads of the GPS). However the road is in bad shape. There were a few creek crossings that were mildly technical and probably indicated bridges had been taken out. I can’t see why else the track would have deteriorated so badly as it seems to be the only connection through that pass. Toward the Nitinat river side it got reasonably steep and water running down the tracks has badly rutted the road. In fact it was unusual, in that it didn’t form the normal V shaped ruts, but instead very (5+ feet) deep U shaped ruts in places. James realized the road-bed was still quite wide and that with some clearing we could make an alternate track down a different part of the road bed. He did most of that. I walked down the track to make sure that there wasn’t anything worse ahead, and then continued another bit to see if this end of an alternate track looked as bad as the other end had (it did). By the time I got back, James was basically done. After a brief break to cool off and recover some energy we brought the bikes down. I really wish I had video (batteries were used up), because it was scary as hell looking terrain. Even though the 640 was back to “not idling when nose down” and not helping much, it really wasn’t all that difficult (despite going a bit faster than I normally would to keep it coasting over the bigger rocks). We had taken a fair amount of time while walking up to fill in the worst holes and knock of the tallest peaks. With the bikes on the maintained part of Nitinat River Main, it became time to pick a path home. I probably would have just taken the beeline out via the North side of Cowichan Lake, but James wanted to go through Renfrew… which opened up lots of possibilities. I wanted to try the “Kissinger Bypass”, but that turned out to be gated. A quick look at the GPS pointed out that Granite Main was near and I know the path from that to Caycuse Main, which would lead us to McClure and McClure lake. I had forgotten (or never realized) how awesome the climb up Granite Main is. That’s a great track to run “with spirit” :) I then missed the turn at the first real fork … but didn’t bother stopping James as I hadn’t been to the end of the road. The connection to Caycuse is a bit rougher than I remember (rockgarden), not sure if that is a real change or just being on the loaded 640 instead of the DRZ. From there it was just a brief stop at McClure Lake, down the Bugaboo Bypass (the west end of which has been ruined), through the end of Renfrew and home.