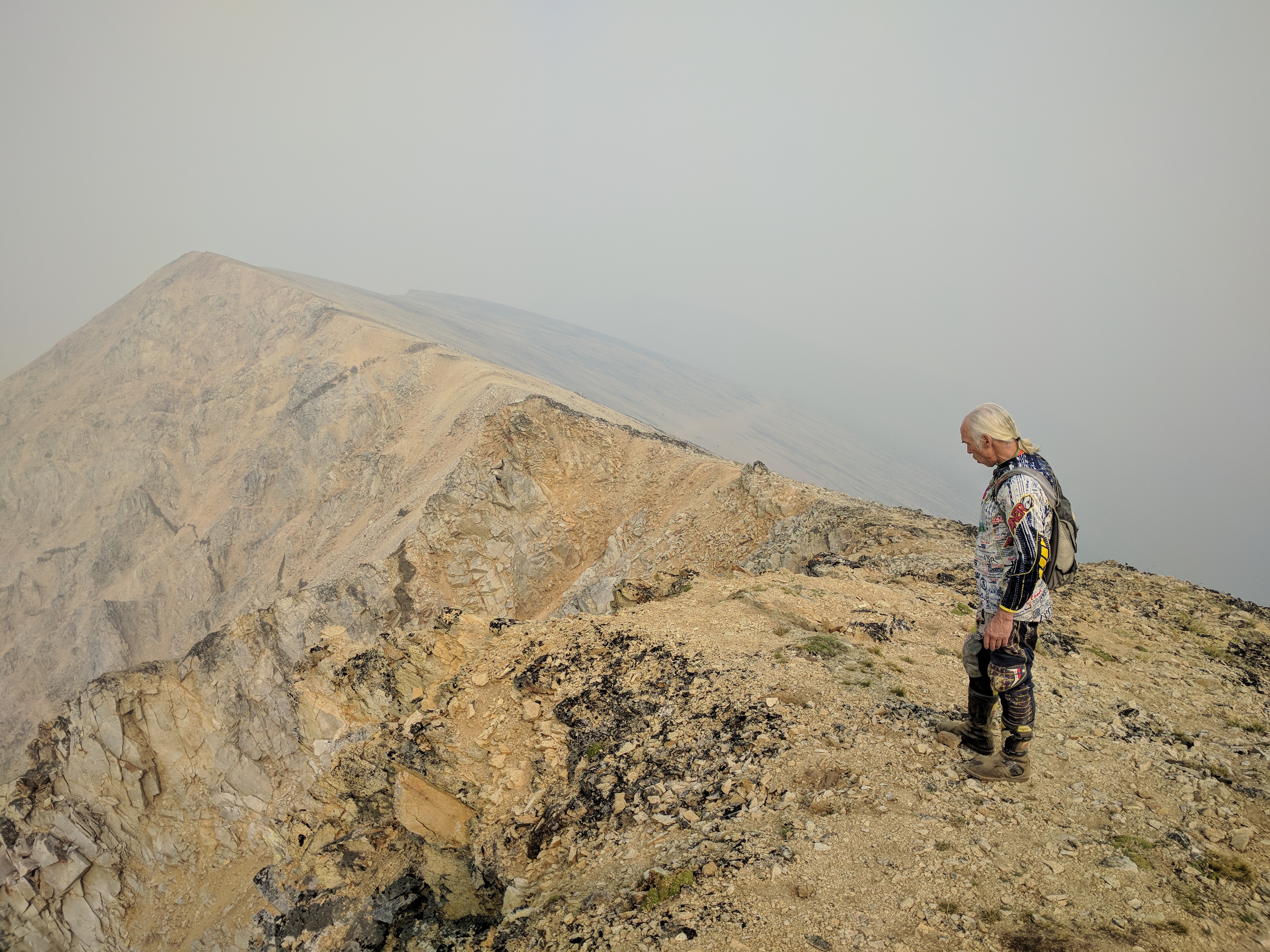 A weekend+ trip, officially back to Molybdenite, but we expected the wildfire smoke to mess up the view. Neither of us had ridden either the east or west sides of Harrison lake. Throw in a couple hot springs and it sounded like a fine excuse to go riding…

We managed to catch the 1pm ferry to Tsawassen, and from there made our way to Maple Ridge … which probably wasn’t the best route. It took longer to get to Harrison Hot Springs than I expected. (I need to spend more time making real estimates of travel time, instead of wild guesses which are usually low.)

We made a good start on “Harrison East”, running about 40 km before branching off for the Clear Creek hot-springs.

We certainly did not have the place to ourselves. There were two trucks/couples there before we arrived, and another arrived after nightfall… but everyone was friendly and we had a good long soak/chat after night-fall.

My first set of still pictures from day 2 are the waterfall at the 57km marker on Harrison East. The trail to this is pretty faint, so it clearly isn’t frequently visited, it is just 20 or 30 feet south of the 57km sign.

The ride up over Kookipi pass was good. It’s a beat up old road that generally isn’t difficult, but does keep you focused on your riding. It has it’s wash-outs so there are trickier sections. There was a layer of smoke up around 1100 meters, and since the pass gets up to 1150 or more, we did have the visibility decrease to 3/4 of a kilometer or less. I have no idea what the views up there might be like on a clear day … but the riding was good!

Farther along,  Kookipi creek flows into the Mahalatch River, and the track turns from NE to E and SE. Almost immediately we spotted some organized tour running a number of big rubber rafts down the river. (With one kayak, for a safety boat or a spotter?)

When I’m riding with James, he tends to end up in the front, which considering I am the navigator, leads to some interesting situations. In this case, it led to us getting breakfast in Boston Bar, and then skipping up the highway to Lytton for gas and taking the ferry back to the west side. The route is one I had considered, but we hadn’t made a conscious decision.

I’ve got lots of video, but there is another big skip in the still pictures. The climb up Molybdenite appears to be worse than I remember. That would seem to be a consequence of a significant increase in traffic, and the heavier 4x4s digging some holes. Then again, there is a new slide across the FSR (before the fork to Molybdenite), so some of the damage is simply the environment.

The big question for this day was “where to camp?” The smoke was probably a little thicker at the top, even though we could see the sun more clearly. I didn’t bring much for warm clothes. James had camped before down along Texas Creek, and that became the plan.

I was pretty tired when we got to camp, and it looks like I have no stills of the site. I did take a shot of the creek.

This was the worse site for bugs … although I don’t actually know what they were. They liked humans, but they were not mosquitos. I’m not even sure they bit.

It was also the worse site for animals. I did hang my food when I recovered some energy, but James hit the tent earlier in an attempt to escape the bugs. I can’t remember what he said when I started moving in the morning, but it turned out he’d somehow picked an argument with a pack rat. It had stolen one of his insoles and one of his gloves. He said it even tried to climb over his tent. I thought there was a bird near my tent at one point, but that was it as far as I knew.

The ride north from Texas Creek FSR to Lillooet is IMHO rather bland. But Riding south on Duffy Lake road starting at 9:30 am on a Sunday? That is pretty sweet … even on a little 400cc bike with dirt tires and loaded with camping gear. However, it was a quite a bit colder than either of us expected and I was rather frozen by the time we hit Pemberton.

Food, gas, a pair of work gloves for James, and we were ready to backup and head south on In-Shuck-Ch FSR (the north end of the “Harrision West” track). That was a bit of a shock, heavy traffic coming at us and dust everywhere. Traffic did die off as we got farther south. But even at the Skookumchuck turn off, and the side-road to Sloquet hot-springs had traffic.

Sloquet was “interesting”. The band representitives were there to collect your “day pass fee”, as soon as you arrived. Compared to Clear Creek, Sloquet in a word was “grimy”. The pools were rather shallow, the water wasn’t as hot, there were little tea candles everywhere and wax on the rocks. There was not a lot of litter, but there was evidence of lots of feet/people. Up by the parking lot, things were dirty and worn down. The driveway had huge deep holes in it. The outhouses were disgusting, the picnic tables were dirty and starting to rot. The fee collection agents were staying under a tarp.

The road changed as we got to the north end of Harrison Lake(?). For a good few kilometers it was pretty narrow and beat up … a great ride on a DRZ… not technical unless you opened the throttle :)

As expected, there was a bridge out. James pointed out that it was a substantial bridge (e.g. a long span), and even just removing the old deck is going to be a challenge (one of the footings washed out and the south end dropped about 10 feet). I’d seen pictures and heard enough stories to know that James and I shouldn’t have any trouble on the lightweight bikes (as dual-sport/adventure bikes go), and we didn’t. But it was interesting to see that the track around was narrow enough to keep out the ATVs.

If my memory is correct, the roads got wider from this point, and traffic increased again. We ran the south end in “formation”, which mostly avoids the dust problem, but only works when the roads are wide enough to be able to see ahead. A stop at the first gas station took about 9 liters… nothing for me, but a lot of gas for James’ 10 liter tank (see previous point about checking distances.)

And from there it was basically just the grunt ride back to the ferry. Traffic was heavy and we missed the 7pm boat by a few minutes… something that wouldn’t have happened if we were more familiar with the route. Our inverted formation didn’t help, nor did my uncertain ability to read the fine print on the GPS…

… but all told, we got in some excellent riding, found some sites well worth re-visiting, covered a lot of track neither of us had seen before, all with no injuries or break downs.

(p.s. Larger version of the pictures are available in my 2018 dualsport gallery starting here.)