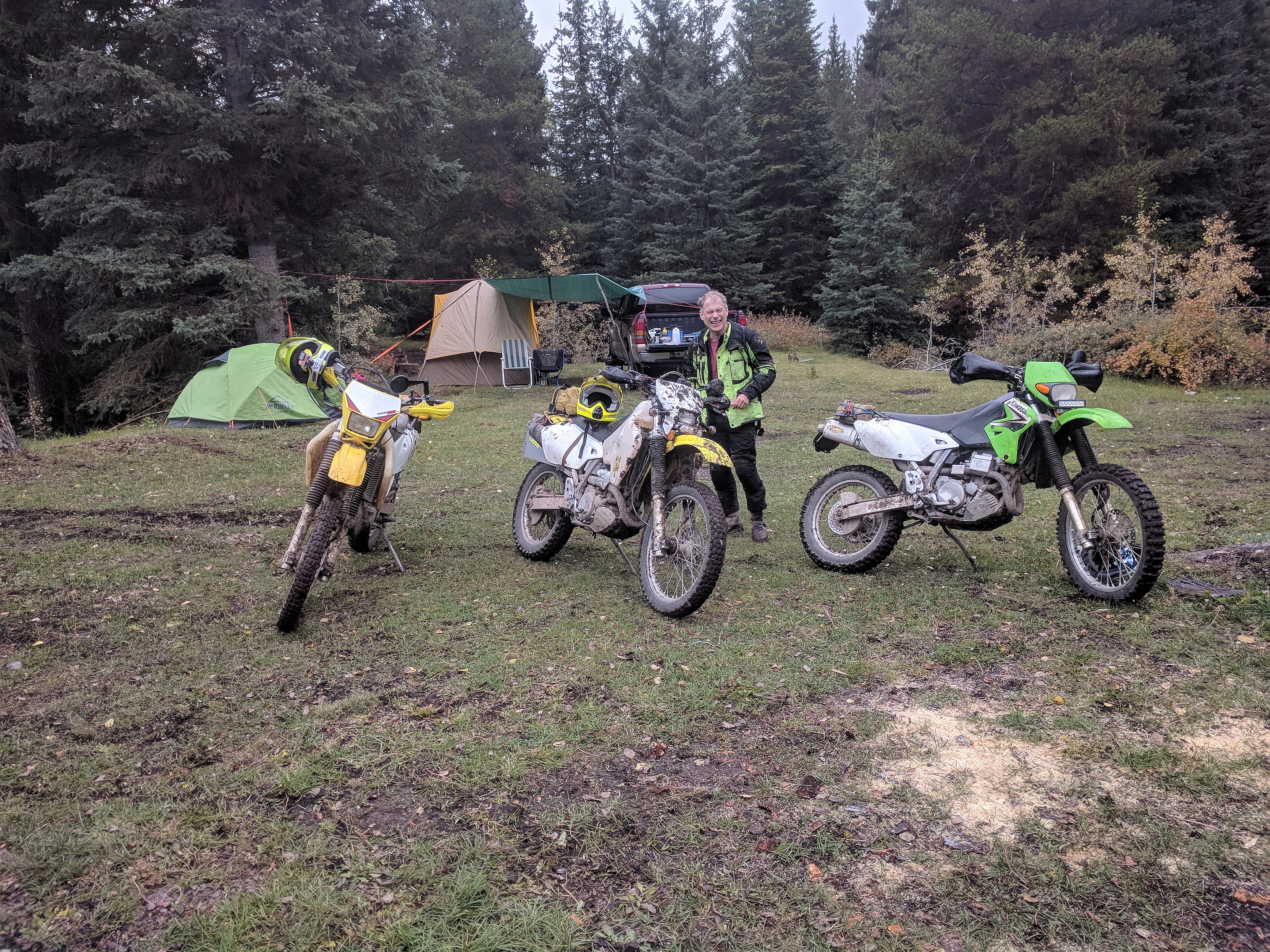 James W invited Devon and I along to join some other riders up near Onion Lake, in the area where the Monkey Wrench race is held.


We (James) drove up (in a borrowed truck, thanks Greg!) on the Friday, leaving early enough that we actually got a reasonable ride in that evening.

Saturday was billed as a “not too difficult” ride that we should be able to do on the dual-sports (James, Devon and myself — all on DRZs). This was led by one of the other guys there who knew the area very well. It probably would have been fine, but there had been some rain, so what would have been dust, was sticky gumbo on top, and either harder mud or loose dust underneath. The DRZs didn’t have fresh knobby tires, and the gumbo filled the treads it made things “interesting”.

My bike also appeared to be jetted badly for the 1500m altitude… it would just bog out while climbing the difficult sections slowly. You’d try to slip the clutch and let the revs go up, but at that point I usually would botch it and either stall it or blow out the rear wheel. I had considered changing the jet down one size when I finished the motor swap (the week before), but didn’t want to mess with it just before a big trip. I’m convinced it is running rich because I have not been getting very good mileage. (James got better mileage than I did on the Molybdenite trip with an FCR carburator — which are known to be thirsty.)

[October edit: All of which just shows I should have done some reading. I wanted to lower the needle, not change the jet. Whoops, go fix it again.]

I got pretty tired (of picking up my bike), and came to the “this isn’t fun anymore” conclusion. I was running last in line, which probably was the worst place for the “weak-link” to be. The chewed up surface with our not-so-good tires did not help. I thought I clearly expressed my “just want to get back to the road” feeling… but after crossing several roads, it seemed clear that things were not going that direction.

After a couple more crashes on a slippery downhill section (falling on downhills  was a new thing), I just bailed off the back of the group at the next crossing.  Unfortunately, it wasn’t at all clear how to get back to camp from that spot. I had the camp waypoint  and the backroads dataset in the GPS ( plus food, water, tools, a lighter, etc) … but the road wasn’t shown, and our track had been pretty much straight away from the campsite. I ran up the road to it’s end and found  (as I had suspected, that we had crossed it a couple times). I then ran down it to the next fork, where James intersected me and said the group was just up the hill a bit. I haven’t had a chance yet to look at the GPS track against a satellite image and see what the logical road based return track should have been.

(edit: Another 200 meters up the road and I would have been at a T intersection, with one track leading directly back to the main Monkey-wrench campsite.)

Anyhow, I did ride back to camp with the group (except for the last couple km, which I did on the road). There were still some challenges, and Devon (and Pete) rode my bike up some sections and there was a bit of pushing. Fortunately I wasn’t alone in being challenged.

Sunday was less technical, and drier. After having been (very much) the weak link on Saturday, and riding at and beyond my abilities, Sunday seemed “easy”.  I did follow Devon and Jame’s advice and removed the rubber bits from my footpegs (finally), that likely helped, but so did staying lower (less clay, more sand … and less carburator trouble), and I dropped some air out of the front wheel to try to help stop it bouncing off things. It felt like my flow and control was better.  James had a bit of a bad down, he missed seeing a head height small tree over the track and got a bit banged up. (I’ve got a few nice bruises too.)

Monday … was basically just pack up and drive home.

Edit: I updated the basemap in my GPS shortly before the Inuvik ride (mid July). About that time, someone added a road into OSM that was only a couple hundred yards from where James intersected me and would have trivially led me back to camp [but it wasn’t in my GPS]. I’d like to think I would have found it easily. As it was, re-entering the single track took us up what was probably the hardest climb of the ride (due to the slippery surface). [This was the NW corner of the track.]