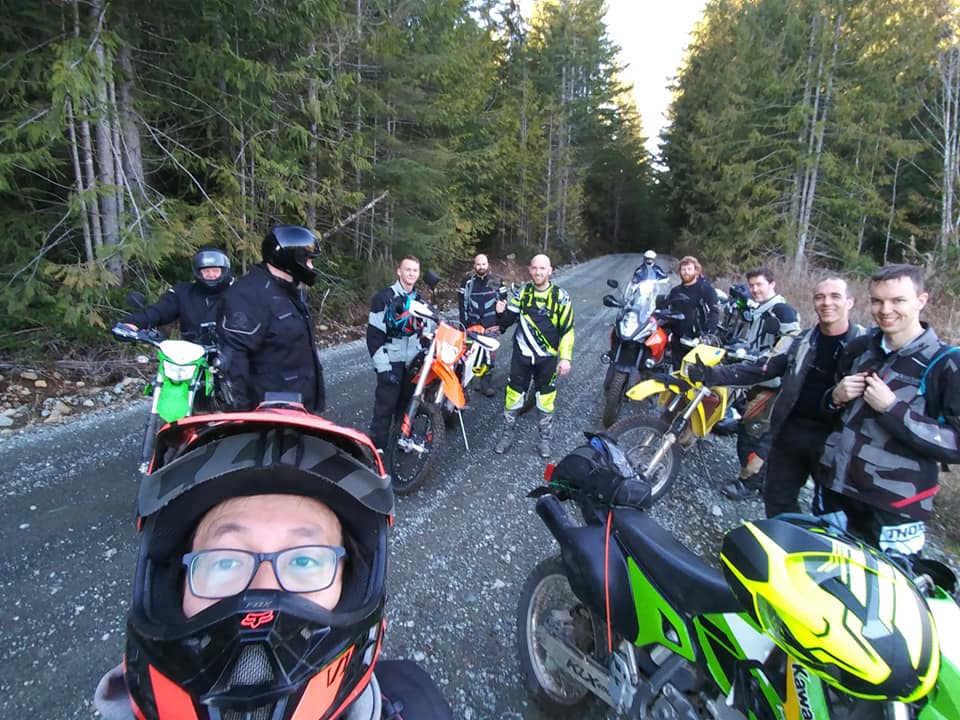 Alex posted on facebook: “Anyone want to do some dual sporting this weekend? I’d like to follow someone around the trails” … there ended up being a dozen riders :).

Lots of riders, some good pix on FB. I shot some video.

The ride turned out to be harder than I meant it to be. Folks had more trouble than I expected. I should rephrase that… they didn’t really have much trouble, but they expected to. Looking back, the challenge was to release/realize the better riders they didn’t know they were.

We started off by drowning a DRZ. The entrance at the far side of Muir has always had a hole you had to go “around”. Well, that hole was full of water, and the 3rd bike didn’t notice that the first two bikes had stuck to the left edge. So while the bike didn’t exactly “inhale” water… the airbox certainly filled up. I probably would have covered deke around the hole in an intro lecture if those bikes hadn’t darted ahead. It also turned out there was a bypass around the hole.

The DRZ was the easiest of the drowned bikes I’ve dealt with. We pulled the airbox cover out (gush), and I squeezed the vent at the bottom to get the last water out. Someone else remembered to pull off and wring out the air filter. We stood the bike on it’s rear wheel and “bumped” it a bit to get it to turn over a couple times and help expel enough (any/all?) water from the cylinder that we could hit the starter without breaking anything. On bringing it down and hitting the starter, it turned fine, but did not really want to fire. It behaved like it wasn’t getting any gas… after a bit more cranking it would idle but you couldn’t open the throttle at all or it would stall. Finally I guessed there was a thin layer of gas on top of a float bowl mostly full of water (open the throttle and it sucked up the water). There’s a convenient (surprise) float bowl drain, and once that was done, she fired right up and ran fine after a couple of little stumbles.

To a degree, that set the tone. Things that were not supposed to be hard, were harder than expected. Getting up Kirby proved more difficult for most of the riders than I thought it would be. Then we crossed over to Muir, and either I picked the wrong path, or I just didn’t note it as hard on previous runs through.

Once we got to Muir, things obviously opened up and got simpler. “Alligator Main” (end of Muir to East Main) was in much better shape than when I last rode it. Traffic has smoothed off most of the new erosion/ruts. We stopped for a few minutes at Diversion dam. Chris took a great shot of his bike there. I just about drowned mine goofing around. We rode out East Main / Forebay, and back into town, with a stop in Glen Lake (again).

Credit to Chris, Colin, and possibly Alex for these shots