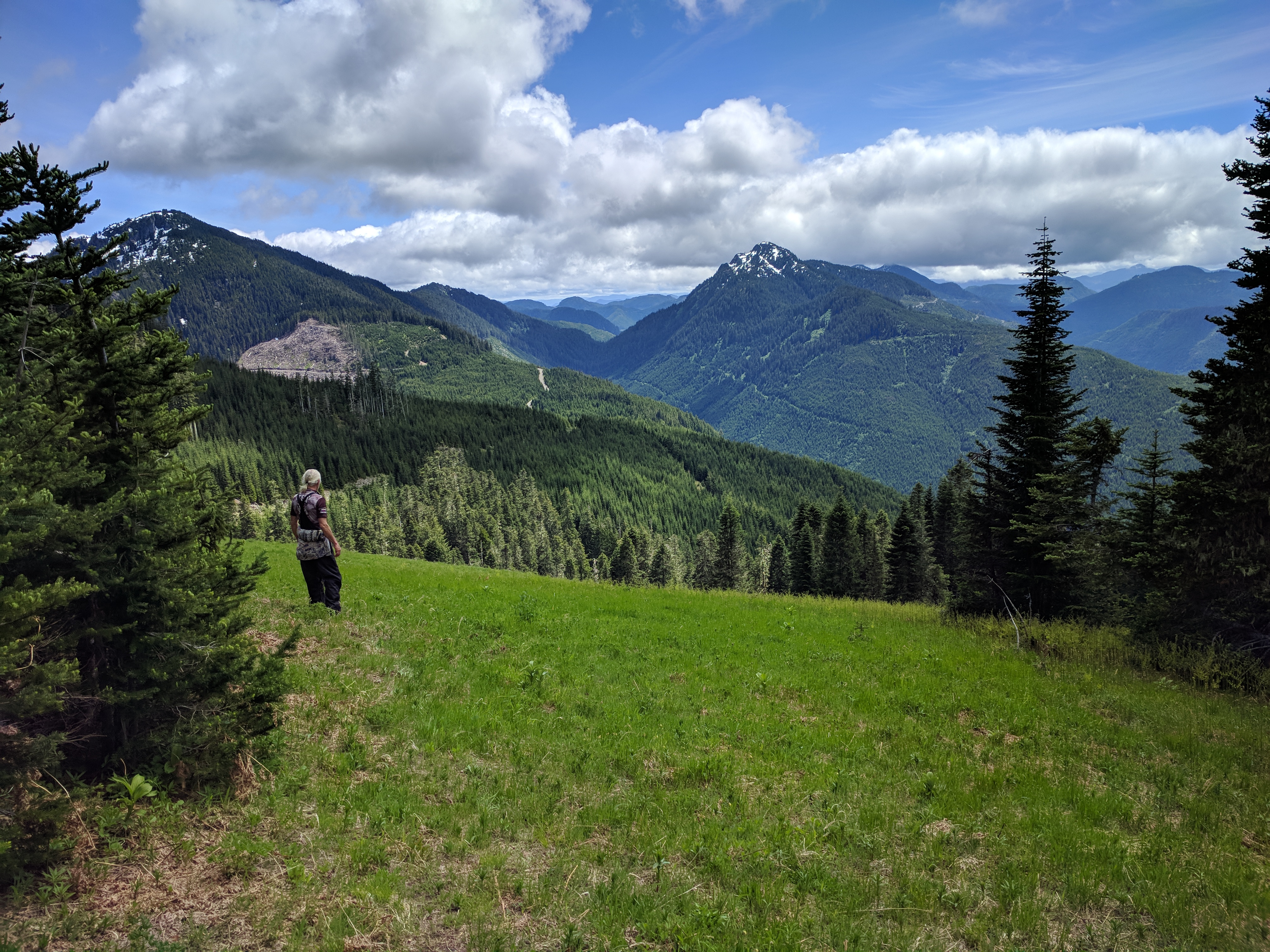 Took off on Friday with James and Devin, returned exhausted on Sunday. Great ride.

Start was supposed to be noon at Devin’s place (Shawnigan), we were a bit late, and headed north staying basically off the highway. First photo point was around Skutz falls.

Next photo point is the same subject, but near the north end of Gordon River. This was a much bigger collection of junked cars, but I’ll keep it short.

Next photo op was a grapple yarder that was left where it was when a logging company went bankrupt. Both Devin and James either worked with/on this yarder, or one very similar to it.

Another big jump. (I’ve got more video than pix.) Our route took us from Gordon River main, up Truck Rd #2, (west) across to McClure, (north) up to Caycuse, and then north on what Devin called C5 (Caycuse-5000), and over the trail to the top of Granite Main.

Friday night campsite was a bit off our track on a sun baked bit of road we saw from across the valley.

Saturday was a fairly early start, not that we were in a rush. First pics are from the Vernon Creek trestle/donkey engine (about 1.5 km west of Kissinger lake).

The intended route was to go up Nitinat Main and come down the Nanaimo Lakes road. James and I had come down a very rough track from Cameron Main last summer, and wanted to see the track was better or worse this year.

I led the guys up this side spur to get a view down the valley after a water stop.

It turned out that a local ATV club seems to have cleared out the the connection. No one would call it an easy ride, but it is much better than it was when James and I came through. We hacked out what we had to in order to get two motorbikes through, but we only had a hatchet and a small folding saw. Someone has been through there with a chain saw. That said, we only checked out the lower 250 meters or so, which as I remember was the worst bit. (Going north, that starts where the deep rut cuts across the road and goes over the bank.) Hopefully I’ll get the video edited to show all this.

So, after checking that out, and running back to the track for nanaimo lakes. (That climb to the top of the pass is nice, straighter and more surfaced than Granite main, but still nice. Then again, the whole leg up Nitinat was good, starts with rough pavement and gets progressively narrower. Only at the end does Nitinat main start to climb and get a bit washed out.)

We had a bit of a lunch break, at which point Green Mountain was discussed, but we were far from sure where the turnoff would be, and how far it was. I managed to find it on OSM on my phone (the GPS is almost useless for finding things). Green Mountain turned out to be fairly close, and easy to navigate.

After that, it was pretty much time to head for the LIRC group at the Deadwood campsite. We didn’t have a lot of gas to spare ($20, 12.5 liters or so at the Cassidy fill up next day).

The campsite was a good time. I woke up with a sore throat from some combination of talking too much or too loudly. There were something like 20 tents there.

James left early as he had another Sunday commitment. That left Devon and I to try to find a backroads route back to Shawnigan. We were pretty successful in that. If I was re-running it, there are one or two detours I’d make, but for running with not much more than a glance at the backroads mapbook, we did well.

We ended up coming out at Hillcrest Rd. I was pretty tired at that point, and elected to just take the main routes (highway) home. I believe Devin took a more backroads path.

In all, it was an awesome ride. That said, I was exhausted upon getting home. I’m not sure if it was too much rum, or some bug I’m fighting, or just age. Anyhow, I’ll need to keep an eye on my pace, for any more long (multi-day) rides this summer.