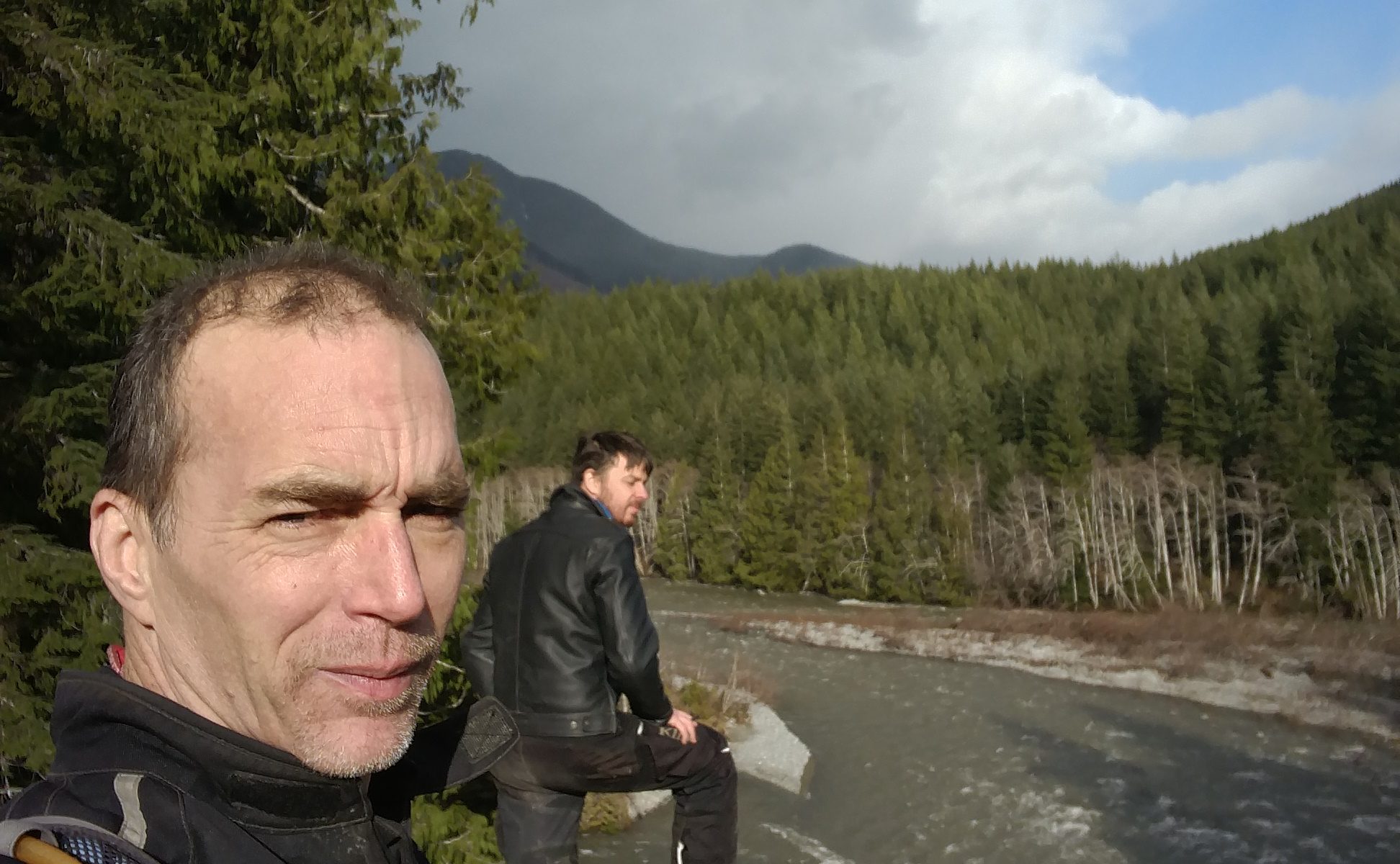 James coined the coastal catastrophe name, we got about 4 inches of rain the night before and it went from downpour to sunny. Great day for a ride.

Unfortunately, co-ordination was lacking. I had let my plates expire as I wasn’t sure I was riding this weekend, and thought I might be able to save $15 by letting it slide a week. Rendezvous was 9:30 (far side of Langford) but the insurance place doesn’t open until 9am. I was there at 9 (another story), and on the road by 9:50. I didn’t even consider that I might have made the rendezvous before they left… and consequently took my normal route to Sooke, which runs down Humpback… and skipped by the rendezvous.

I found Stewart in Sooke, sitting by the roadside waiting for the ride to go by. He figured they weren’t going to leave the rendezvous until 10:30, and we waited for them. We finally gave up and headed for Port Renfrew… only to find the group about 3 cars behind us at the first light :).

The ride to Renfrew was pretty routine. Chris kept the pace pretty close to the speed limit, but even so, with the wet rough road and my dirt knobbies, I still had to watch the corners. Had a burger and great craft cider at the Renfrew pub.

From there, things were vague. The “loop” had been called off because Pacific Marine road was closed due to flooding near Fairy Lake. Some of the guys made plans to run up Gordon Main (and go around the flooding). Most folks (?) headed straight back to Victoria, and another group decided to go check out the flooded road.

In theory, James and I were going with the guys up Gordon Main, but we also wanted to see the flooded road. Bob Jeffs turned left for Gordon Main after the bridge, and when I asked him if James was ahead of him he said yes. So we proceeded up Gordon Main, and stopped at the bridge over Gordon River. I had expected James to have waited for us there, but I had also noticed an absence of tire tracks.

Upon double checking with Bob, it turned out he didn’t mean that James had turned left ahead of him, James had simply left earlier and was out of sight. It turned out James had a found a trail somewhere, got stuck on it, and we had passed him. James took the left and proceeded to catch up to the Fairy Lake group.

After waiting 15 or 20 minutes, Bob and Greg decided to continue up Gordon Main, and I doubled back to look for James. I got to the “flooded area”, and the water was only about 4 inches deep. It seemed likely that everyone had just gone through and proceeded up Pacific Marine … so I decided to follow and maybe catch up.

Given that I was 30 or 40 minutes behind them, it isn’t much of surprise I didn’t catch up. I did make a few stops that I’ve never taken the time to make before… but to be honest, stopping by the creeks on a hot summer day still seems more attractive than stopping by a rushing (overflowing) creek on a relatively warm February 1st. But it was a awesome ride. I would have made better time with real tires, but the knobbies weren’t entirely out of place, as the road surface was far from clean… (debris covered in places). It did rain/snow for a minute or two, but turned sunny a couple minutes later.

Turns out the bike’s gearing is not great for a top speed run. 5th seems too tall and 4th is probably too low. I really couldn’t go any faster than I did in Moab despite the bigger main jet.

I put in a bit of trail before getting to the end of Pacific Marine, and also between Hill 60 FSR and Hillcrest. I considered running through the Oliphant area, but decided that daylight was getting short.

I have one battery worth of video… it ends on pacific marine and doesn’t show any of the trails (as I forgot to bring the other batteries that I had re-charged). I tend to forget just how good the trails around Hillcrest Rd are… and my track alongside pacific marine was something of an adventure… pretty wet for running solo.