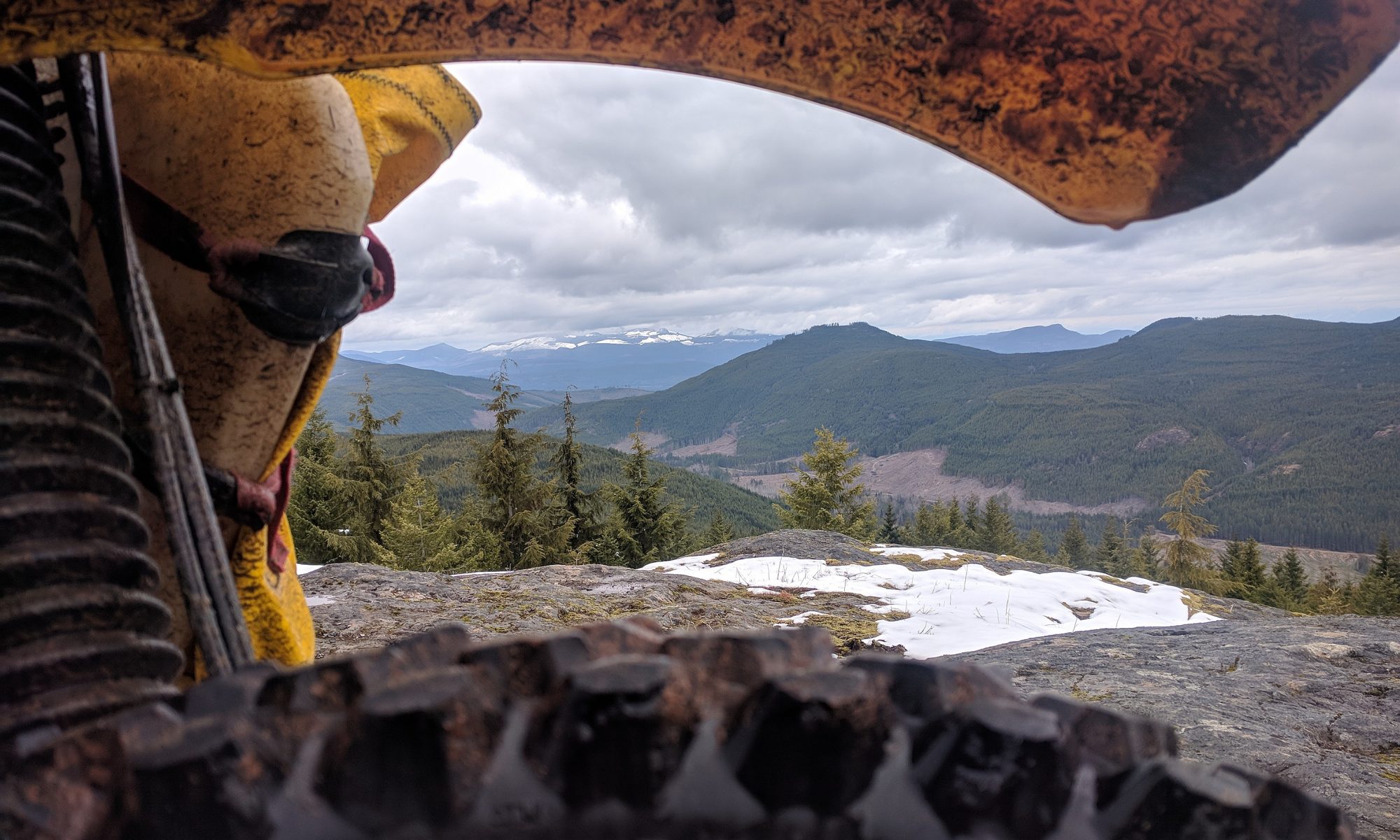 I’m not sure if this one qualifies as legit or not :) The Kapoor and Holt gates were open, so most of it would seem “legit”. Chris was making noises about revisiting the track from the August “death march” … and I wasn’t keen on the idea… so it seemed like some scouting would be a good thing.

So the Riverside entrance didn’t look good. It’s been somewhat blocked up, and yeah, I got what could have been a scowl from a pair of dog walkers… although they guy might have been in that awkward (I’m supposed to scowl, but would rather smile) position. The Mountain Rd entrance might be better, but that gives up the Mines Rd prelude, and I found some horizontal shafts up there.

However, I found multiple by-passes for the cut road that gave us grief last time, including the obvious one that I doubled checked (just up the hill) last time. The tank traps were new but shallow. They have now been smoothed out. There’s a funky single track that comes in from above. It’s tight, and technical despite being relatively flat. And my original entrance today was also technical and far from flat.

I went up through the Eagle Heights area instead of along the river/park. I got a bit of a surprise… I’d forgotten that it’s “winter” and I might hit snow if I went high enough. Yup, varied depths of snow above 600m. From the heights I went to the south end of the powerlines and ran them north, almost all the way to Skutz Falls main. There’s some fun bits in there if you ride with “spririt”. I got a bit more bent than I meant to on the first climb, but recovered. There used to be a track to the left/west that is still in my “could not climb” books. Unfortunately they’ve dug a nasty hole at the end of it that would be hard/dangerous to get around… and when I looked at it from above, it might be covered in slash from a new clear cut.

Made it to the lookout on the powerlines, which is where the feature and next shot are from. Was some snow there… as a rule, you could ride up on the shoulder and avoid most of it.

In a couple places I checked side routes, as this has always been one of my semi planned routes for a group ride, and having harder and easier tracks that go to the same places is nice. Unfortunately, you can’t skip all the hard bits, as the main track is not in great shape.

There was a fair bit of distance, but most of it went by pretty quick, some of it literally. There’s some “twisty but open” track in there which was fun to push through. And then I got to the descent down to Skutz falls main, which is in my books as a “challenging” climb. I’ve done it, but there were sections I had to take a couple tries at. There was a side-by-side at the top, which had apparently just climbed it… as the track was chewed up with snow and mud mixed. I ran most of the way down it, but was watching the parallel (easy) track on the side, and it was farther away than I expected… so I ended up doing some exploring and found a previously un-mapped connection that gives you an easy track and a _much_ harder one. There’s a non trivial ditch in the road, just below where I did some playing with the gopro filming myself jumping a cross ditch.

After that the light snow started to change to a heavier rain, so I decided to beat it for home and use up the spare daylight elsewhere if the weather improved. The first bridge I tried to take (old Skutz Falls Main connection) didn’t work well. Could have used it with friends, but seemed too sketchy to try solo… So I backed up to Holt-67 where I’d already been… if I’d just gone right instead of left it would have been about the same distance and actually worked.

From there it was pretty much just a bee-line home… and a miserable one. Had a good soak in the hot tub on arrival.