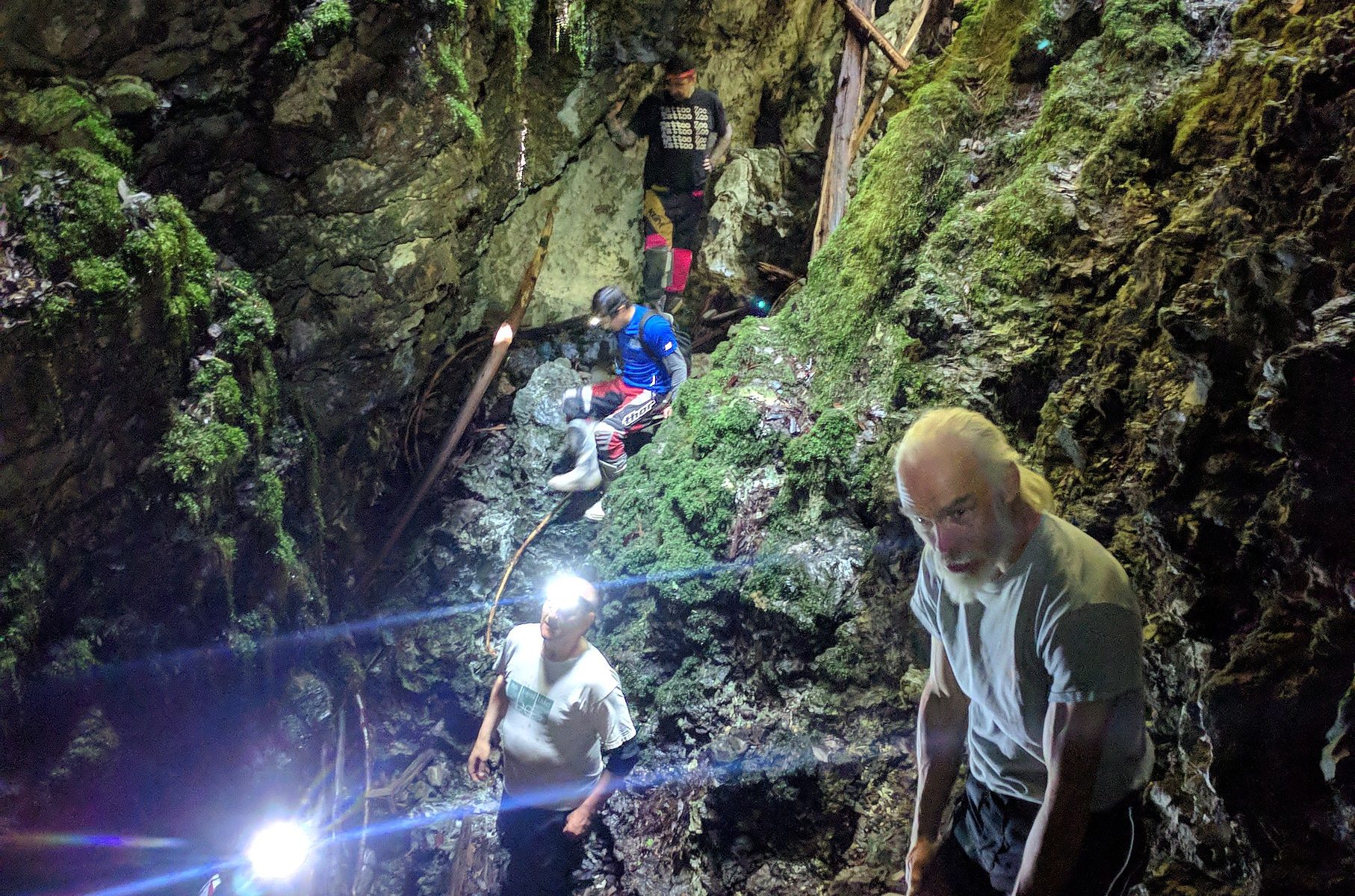 I tried to put too many “I want to” items into a single ride. I wanted to scout SJA, visit the bear-creek caves, run down the power-lines to Skutz falls main, etc. And then the next morning, James and I over did it hiking the lost-lake loop. I can be damn thick some times.

The summary pretty much covers it. We came in via Riverside, cut over the edge of Eagle Heights. Westward down to Wild-Deer lake (but did not stop), west to the powerlines, and then straight north on those all the way to Skutz Falls main… which includes that nasty downhill chunk. And that chunk was way worse than it was when I rode it a few weeks back. It’s dry now and very loose (the quads probably keep it very chewed up). West along Skutz Falls main, and then up the short/straight cut to try to avoid the “Rock Garden” climb out of Skutz. We got to within 1 km of the connection, before the track was blocked by what appeared to be deliberately felled trees across the path. So, rewind back to Skutz Falls main, and up the Rock Garden, through the 4×4 bypass, and down Skutz-14 to the waypoint I had for the caves. From there it was west and south to Pete’s pond. From there we took what appeared to be a “less traveled” route southward. I suspect the more common path is the one just to the east. South towards M-line, but sticking to the river for the smaller road. South from M-line toward Mt Todd, but the group split where the fork to the bridge going west was. It had become obvious that the day/track was a long one, and most of the riders opted to go over the shoulder of Mt Todd for and exit via Kapoor (25 km or so), instead of going across the river, up onto the ridge and then south via SJA, SE via Williams creek main, and south to Butler along West Jordan, and then still having 20+ km of dirt.

Part of the reason for the extended version was that James and I were planning to camp out, so going down Kapoor didn’t have any real benefit. The other aspect was that I wanted to see what condition SJA was in, as it would make for a fantastic big bike loop.

I can’t recommend SJA for big bikes, and I can’t even recommend it for novices on lighter bikes like DRZs. It’s pretty rough, with some steep slopes that could exaggerate consequences of a mistake, and the remote location makes it even worse. And unfortunately the best viewpoint is cutoff by technical sections on both sides… not that you’d really want to ride up and turn around. It’s nice, but it’s not that nice. Fortunately it was just James, Rob, and myself running through that section. SJA is also a bit of a maze. Even with the GPS and a way-point set for Fleet main, I still made a couple wrong turns.

The next morning we hiked around lost lake… but didn’t plan it as a loop. We rode the bikes in a bit and then walked… which meant we did the whole darn hike in riding boots (something like 6km).

There’s other stuff I’d like to show, like the two technical sections on SJA, but if I have it, it’s only on video… which I’ll try to get to.

A few sections were different than I expected given that I had run them recently. Many of the tracks along the powerlines have recently had a machine go over them trimming the brush. This made those sections a lot simpler/faster. Near the top, the erosion had made it fairly technical, but the machine has smashed the track fairly flat. The descent down to Skutz Falls main was way harder than it had been. That is mostly due to the dry conditions, and partly because the quads/side-by-sides are chewing it up and not letting the dirt get packed.