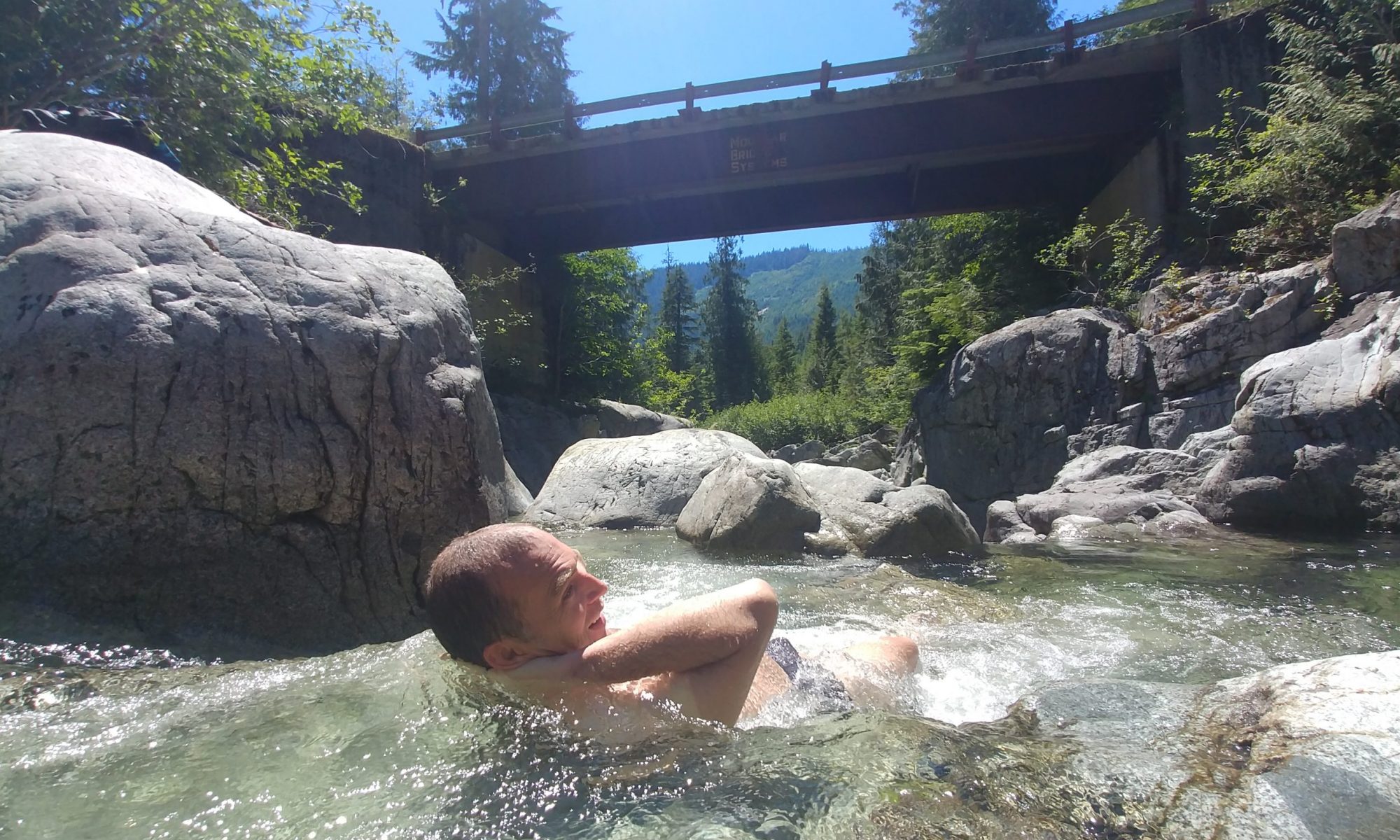 The dominating fact/feature of this ride was the heat… there was a heat dome over Western BC and it was HOT, 30s in the shade. Mid or high 30s in the clear cuts. The goal was to go for a swim, and Chris had a longish route that was hopefully going to stay in the trees and preferably north facing slopes.

Horizontal feature was present on Kapoor at 8.5 km. Chris found/suggested a descent down to an old track which worked. From there it was pretty much mainline, Kapoor, West Jordan, Williams Creek (now marked as J50 [again]), and then up Fleet. We had some pictures of the Fleet river that looked like possible swimming spots, and indeed the southernmost bridge was a great swimming hole.

From there things were less certain. Chris and I both wanted to have a look at the crossing where they removed a bridge on the east side of Maid Lake. Chris wanted to get out on Pacific Marine and visit the Fairy Creek protest camp.

… so I pretty much talked everyone into crossing, and rode across myself… which I wish I had on video as it went well … everyone going “you made that look easy”. The trick was simply not getting messed up in the water… I probably actually had gas on before I got down to the creek bed, which meant I didn’t have to fight for speed anywhere. Colin K followed on his 501, but didn’t bring the same speed to the steep climb. One other bike got pulled up with tow straps, and after that we borrowed a winch from the quad that was watching.

Chris navigated from the crossing, and took us on a bit of a detour … heading NW for Lens main. Which could have been interesting as there’s another swimming hole down there I wouldn’t have minded seeing, but the plan was to go south toward Lens 6000 or 6500. That ended up being the hellish part of the ride. The last time I came up that track we had a lady in her 70’s with us on a KLX 250… e.g. it was pretty easy. This time we had two blockages to deal with … one was trees down, and the other was a deactivation. This was not a good day for doing clearing work (too hot). I was half convinced we weren’t going to get past the ditch until the sun went down and things cooled off a bit.

Fortunately someone had left a few planks and some filler material for filling in a ditch. Two planks got us over a tree to the top of the bank, the 3rd plank wasn’t really enough to cross the ditch, but with a little support from below it sufficed.

Another ditch marked a deviation from the old track but there were big new roads, so backtracking on those, we found the new route to Lens 6500 and it was trivial from there. But the quad & bike riders said there was an easy way in … which we clearly missed. It might have been the more eastern route from “it was great, it sucked” … it was clear at points that the quad hadn’t been on the track we came down.

Some good pix, some good video. Hopefully I’ll get that put together.