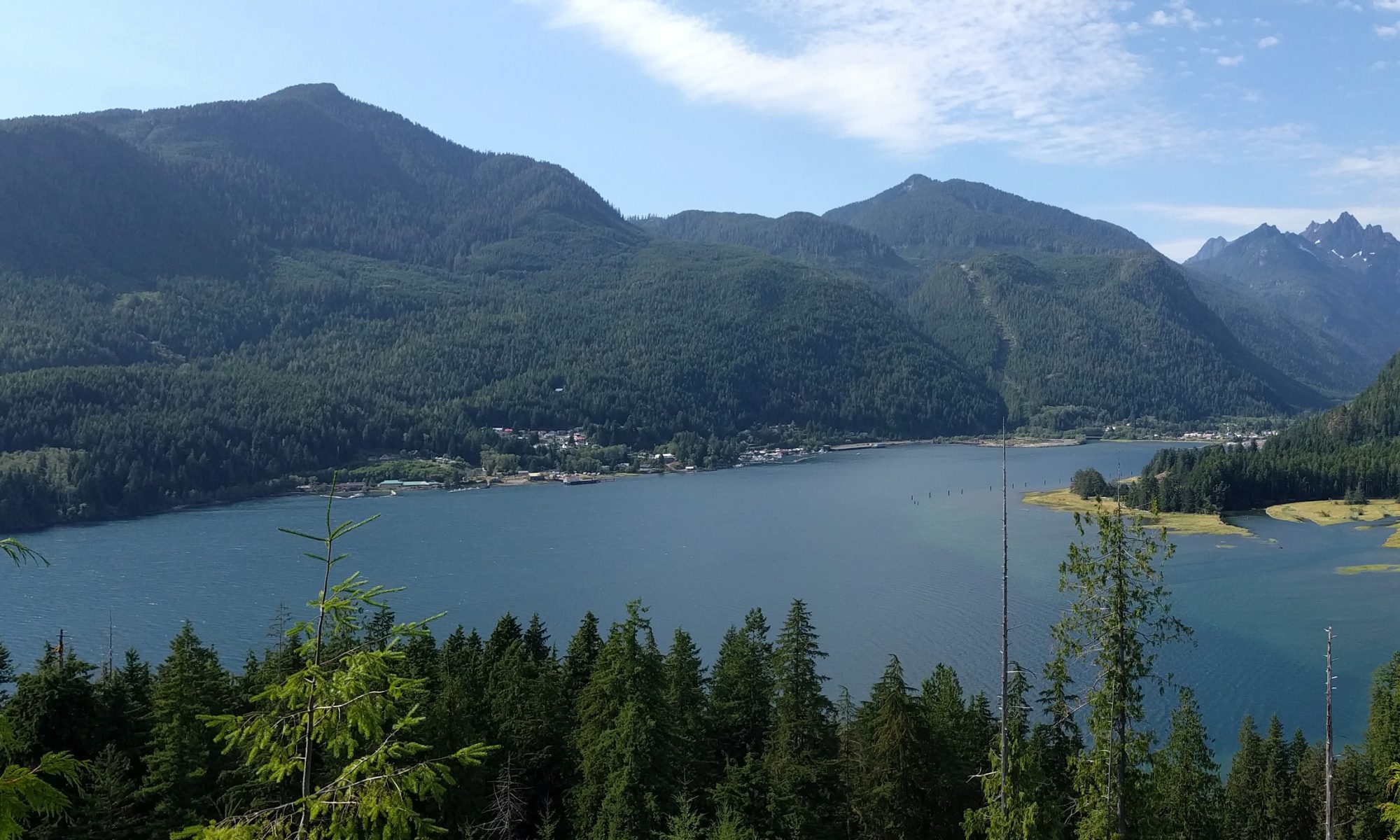 I spent the saturday exploring around Tahsis and returned to Cougar Creek. Sunday included some exploring and the grind home.

Saturday we unloaded the bike at Cougar Creek rec site around 10am. I was supposed to come back for dinner, but didn’t know the schedule, so I missed it. I did get to spend a little time watching Brian in his “host” role. Anyhow, the goal was to explore a bit, and hopefully get out to Tahsis and see where the planned “Unity” trail was supposed to go to connect Tahsis and Zeballos.

I started out heading “out” from Cougar Creek, but quickly decided that I didn’t have a whole lot of day (9 hours?), and turned around and started making tracks for Tahsis. The above shot is aproximately half way from Cougar Creek to the Tahsis <-> Gold River road. It’s a nice little spot. No facilities of course, but way better than $20 for a crowded rec site spot if you you don’t mind supplying your own water and TP.

Next pic was shot from the bridge over the Tlupana River, about 1km from the Tahsis <-> Gold River road. This was a really neat looking canyon, which I wanted to explore, but didn’t think I had time for.

So, I got to Tahsis without any trouble. That’s actually a fairly nice road on a dual sport motorbike (at least in the summer). I dropped in to visit David Wills for a quick chat. There’s a man who has been many places by motorbike… but our focus if there was one, was that Unity trail.

When I was here last summer, Dave took a bunch of us up to the cell tower lookout. That was behind a dummy-locked gate. That gate is now locked, but that turned out to not be an issue for me. I was taking a different route that goes the other direction from the gate … it’s also the route up to the Coral Caves rec site.

I didn’t get far into the caves, but it made for a heck of a change of pace (and temperature). The caves about 30 yards in there is a fairly steep drop, and obviously I was solo and not really set up for spelunking (neither gear nor knowledge wise).

I wish I’d looked up the Upana caves before heading out. It would have made a good stop for the next day, but that’ll have to wait for another visit.

At this point I was running out of track. It was hot and I didn’t really want to be pushing the bike into the overgrowth due to it being fire season. Nor did I know for a fact if the Unity trail was supposed to be up here. (It turns out I had guessed right. But I didn’t learn that until a week or two later.)

After that it was simply messing about, time to kill on a summer day with a motorbike and a fairly full tank of gas. Rough life!

The rest of these are in theory in the correct (time) order.

I monkeyed around a bit more, exploring one or two of the main lines off the road back.

Next day was the ride home, that was a heck of a day too. Despite having five or six hours of driving ahead of me, I was in no hurry to get away early. It was the end of a long weekend and I did not want to be coming back into Victoria with all the traffic. I wanted to be late enough it had already died down (e.g. 9 pm at home.)

While we were out on the boat, it seemed like the OSM data around Gold River was woefully incomplete. I’m not sure if that means my phone is out of date and the data has been added recently, or I just didn’t zoom in far enough. Anyhow, I’d made plans to do some scouting to the south side of Gold River. Amongst other things, there was a rec site there I wanted to see (and make sure the maps knew how to get to).

I also tried to find my way through some old roads from the backroads mapset. As usual with with the backroads data, most of it was overgrown. I ended up chasing some ATV track, and finally decided that I was far enough into the backwoods of no-where that turning back was better than pushing over this ATV bridge to find out what was on the far side (and possibly having to run it twice)..

Doubling back meant I was back on the highway directly out of Gold River. Next item on the explore list was the Buttle lake area.

I would have liked to run all the way down to the south end of the lake, but I didn’t feel I had the time/energy. And that’s mostly hiking trail stuff anyway.

I did run out to the Big Bay rec site near campbell river to see if it had cell service (no … and I don’t think star lake had service either). After that it was just the grind home. Bike ran fine, but the ride still beat the heck out of me.