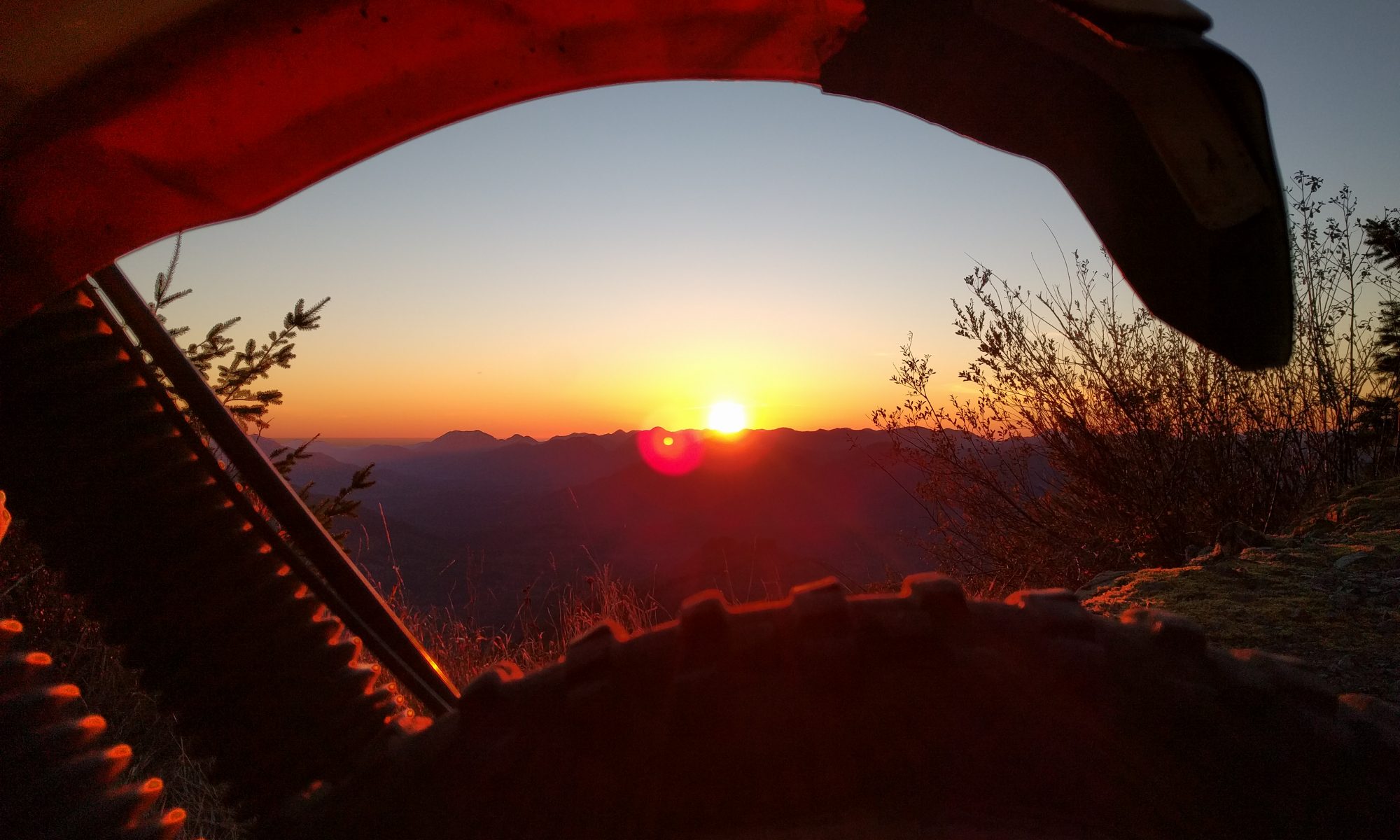 Another quick trip for sunset pix. Cold and windy.

I took the van, it did fine. Bike inside did well on the gravel roads. The van did not exceed expectations, suspension seems pretty stiff, but otherwise fine. I did have cause to appreciate the 7″ of clearance (road was actively being graded).

I expected the cold, and was ready for it. I didn’t camp at the top, instead I setup the tent at the 1/2 way point, and then rode to the end of the road for pix and to BBQ some pork chops while waiting for the sunset.

There might be interesting video of the ride back down, not sure how the GoPro 7 does in lower light. A good headlight did make it easy to see the “don’t ride over that” rocks.

It was too windy in the camp (wind blowing north, straight up the lake and through the trees) to light a campfire, so straight to bed. I dozed for a few hours, woke up thinking it was small hours of the morning, only to find it was 10:30pm. Hard to get back to sleep. Slept in full sweat suit plus jacket liner, balaclava and sleeping back zipped over my head … that _was_ warm enough, but a winter tent would be a fine idea (no mesh panels).

I forgot the coffee, so yet another year goes by without my using the stove. (This was the only night I spent in a tent this year, although I might use it next weekend for Whiskey Creek.)

I did ride around a bit on Sunday, but hadn’t actually planned anything in advance, and apparently I left the GPS on overnight and killed the batteries. That was a problem when I considered trying to hike Mt Hooper but had no topo, and no range/direction to the summit. I got within 1km of the summit on the bike, while exploring my solo-travel comfort zone.

From there I did the Granite Main to Caycuse connector and back to the van at Little Shaw Rec site. Jammer had said there was some blockages on that route. I did see evidence of two landslides on Granite Main that would have blocked the road, but they are clear now … e.g. the road has been rebuilt, not just some guys moving the worst rocks into the biggest holes. The ATV connector was a little washed out, and of course covered in leaves, but not significantly worse than earlier trips.

Back home before dark. I got my exploring fix on the Mt Hooper track, and I made a mental note to fill the bike gas tank, but then loaded the bike in the van, and then forgot to bring the little gas can. That said, driving home in the van in the bright sun sucked (I should have been riding). The bike isn’t sounding good (it’s got a knock, and 3rd gear is clearly going again), so I didn’t want to put the extra mileage on it.

Oh right! The alternate route up to Mt Heather … the logging co has rebuilt the road up to the creek crossing point. (No surprise, some nice trees in there.)

I took lots of pix, possibly some good video. Won’t be much for a GPX track. The route to Mt Hooper is pretty much what you’d expect.