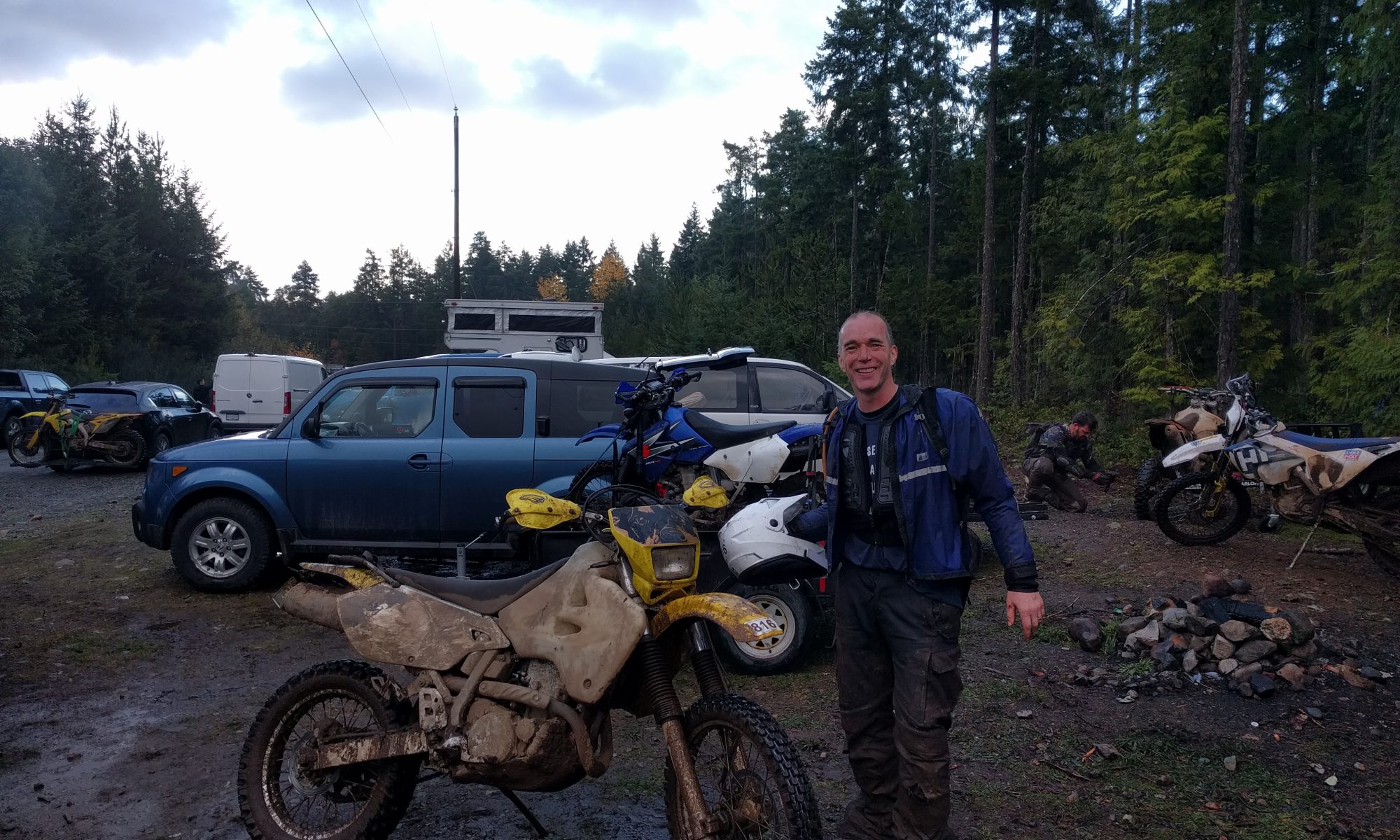 I just wanted to get some of my thoughts down. A blurb in instant messaging seemed appropriate. It was about pacing, and I should have gotten a better understanding of the times involved. If I’d know I was going to be racing for almost three hours, pretty much without any stops, I probably would have been even more conservative through the first lap. (Gatorade in the camelback would have been a damn good idea.)

Seems a safe bet that the brand new tires were a great help. (Motoz enduro I/T from and back.) That said, even with those there were lots of places where the front wouldn’t steer. Lots of deep muddy ruts that got deeper and sharper as the day went on.

I swear the bike dragged me through a good half of the last lap.

Go quick, not fast. A couple times I passed bikes and then promptly messed up the navigation by overshooting turns.

Was a relatively easy course, I got hung up in a few places, but nothing that leaning the bike over a bit and pushing didn’t sort out pretty damn quick, and in at least one of those cases I’d gone way off the track I should have been following (gone to the left side when I should have stayed right). Fortunately or unfortunately, this meant there wasn’t much helping of other riders and there were lots of cases of “bad” passes. Greg S got his kill switch smashed by some other rider’s handguard in one of those.

You’re going to get stupid (from fatigue). So review anything that isn’t 100% routine that you might need to do.

… Like switch the fuel tank to reserve. I couldn’t remember where reserve on the petcock was, and I wouldn’t have been able to read it without my glasses, so I was forced to keep dropping the bike on the left side to try to slop fuel over from the right wing to the petcock side. I had no real idea how far we’d be racing, but the bike wasn’t yet on reserve before I put 2L more in it at home… which with the 2.5L reserve should have been good for 80-90 km. I also took a 5L jerry can, just in case. I thought I had everything sorted out in advance. Nope. Forward is off. Down is normal. Up is reserve. Think I could figure that out in my exhaustion? Nope. Starting with the petcock in reserve probably would have been smartest.

I was lucky that I didn’t need to drive since I caught a ride up and back with Rob T. Trying to stay alert for the 90 minute drive home in the dark and rain would have been a challenge (much thanks!). (I did have a thermos of coffee.)