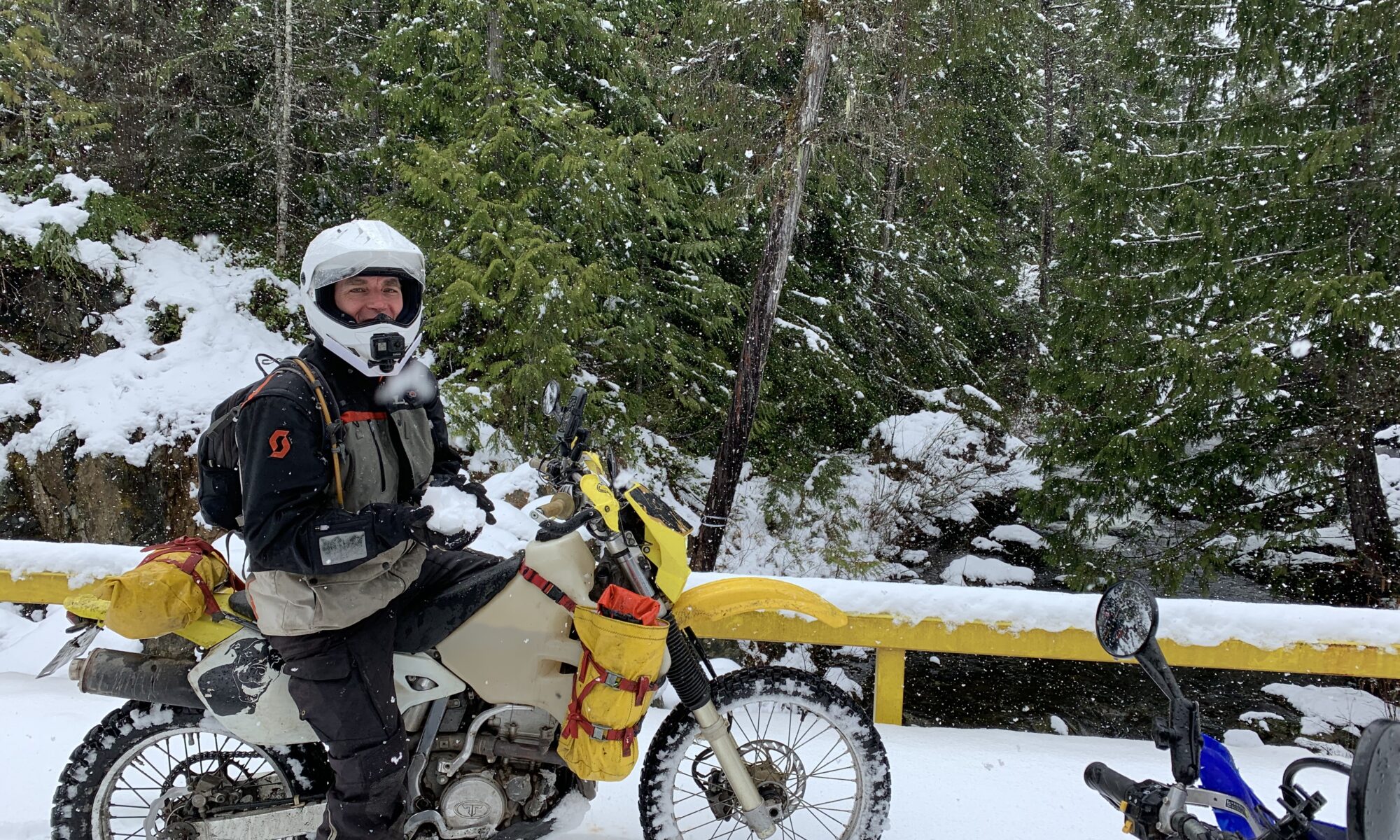 Talk about a changing weather forecast…

Friday night/Saturday morning, the Sunday forecast looked good. Plan was a loop from Shawnigan to Sooke, which would let me stop by my folks place for a dinner that had been put off for a while.

I had posted on FB about the rough plan, looking for another rider or two, and consequently I did get an alert that there had been several inches of snow overnight in Shawnigan. Perhaps I should have brought that to Rob’s attention, as it was we were only partly prepared.

The ride to Sooke was cold and wet… we stopped at Subway to get Rob’s lunch, and then at Tim Horton’s for hot drinks. Then out to Muir and in the same old way (except there’s a row of concrete blocks where the old entrance was … go in now at the start of that).

Rode Lucky Lane which was harder than I remembe. It’s overgrown and without the other riders to keep things clean, it was pretty slimy/slippery. Up Muir and into the snow. I think there was a couple inches of snow by the time we got to the East Muir fork. It got a little deeper as we continued. Deepest point might have been that little bridge (background pic) where it was at least 6 inches.

Up alligator, which wasn’t that slippery, but the WET snow off the low-hanging branches soaked us (Rob most, as he was usually leading). I kept wringing my gloves out, I figure the snow melt was running down my jacket sleeves and onto the gloves.

Met a 4 door Jeep at the East Main intersection. He was headed up Alligator to try to find his front right fender that apparently he’d lost the night before. There appeared to have been two 4x4s that had gone to secret lake (or one in and out), so perhaps they had already found the fender, because we didn’t see it… but it would have been snow covered and we weren’t looking for it.

East Main was where it started to get slippery. The ride up to Diversion dam wasn’t bad, but the ride from there toward the earthen dam was where it got treacherous. Usually the bike would track fine, but sometimes you’d hit something and the bike wouldn’t take the correction, or in one case Rob found an chunk of wood going our direction that his front tire refused to cross. In any case, he had a couple drops, one of which gave him a sore wrist.

The logging company has dropped some more debris on the East Main to Butler connection, so that is currently impassable… which meant we doubled back and exited via East Main. At the highway we went the wrong way and did the couple extra km to go visit the Cold Shoulder cafe and get something hot, and make whatever clothing changes to try to make the ride home a little warmer. In my case that was pulling out the balaclava and putting on the rain pants that I should have worn the whole day. They make an effective wind block, so it seemed like a good idea, even if it was far too late for them to keep me dry.

I did stop at my folks place for a great dinner and good talk … but it was snowing hard (and dark) when I left. A foggy visor, overly bright speedometer and reflected light from the front fender made visibility a real challenge. I rode the first few kilometers going pretty slow with my left hand as a light shield. Things cleared up around the end of Happy Valley with the snow turning to light rain and the visor finally clearing.

What would I have changed in retrospect? Long Johns and wearing rain gear from the house, or stopping to put it on as soon as the rain started. Maybe actually trying out that old heated vest of Dad’s. Damn glad I didn’t take the EXC, currently far too twitchy for plodding slowly and carefully in the snow.