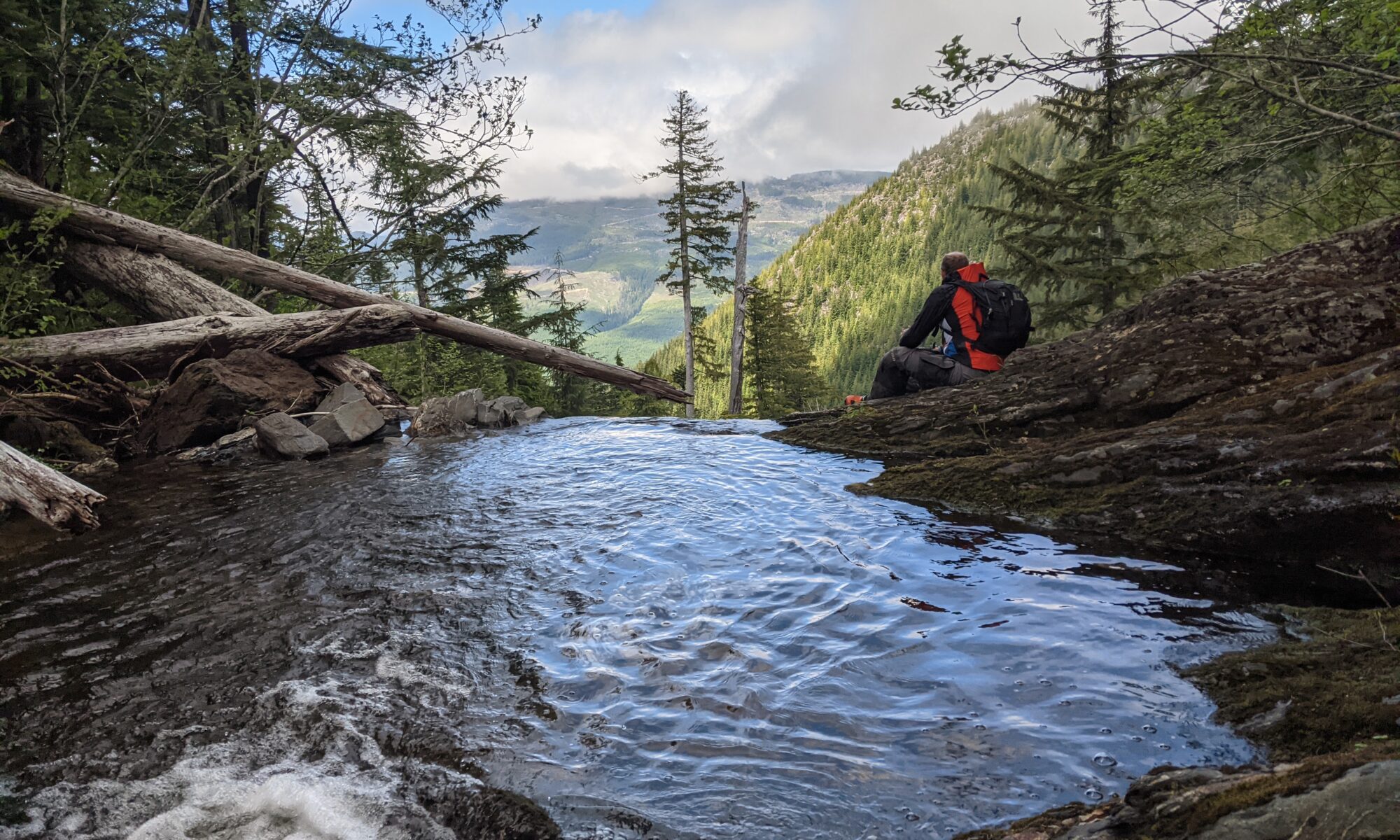 A great ride . Plan was find a view for lunch, and check out the E11/E10 connection Andy J had pointed out. Bonus points for viewpoints, new “squiggles” on the map, verifying J40 was snow free, and for stretching our abilities a little.

Entrance was Tugwell area as it was close and known. I stopped at the TW40 entrance and said we needed to do it at some point. I was inclined to skip it and put the planned mileage in. I haven’t been up TW40 for years (and also here: video with Luke and Brendan). Rob opted to do it. It’s still good, still open, and at least some parts of it are easier than remembered, but I had forgotten the real Crux bit. Certainly easier without the snow, and the EXC helped too.

TW40 dumped us out near the Mt Muir summit, by Ranger Lake.

From there it was down to Butler, the up Valentine main to the turn off for the summit.

In all my years riding west sooke, I had never actually ridden most of Valentine main (done both ends). The GPS took me down some dead ends in 2016 / “it was great/ it sucked”, and I’ve sort of avoided it since. Up to the summit, and into the cloud. Backed down a bit but it was still cold. Ate lunch.

From here the plan was to retry J40, hoping the snow had cleared, and have a quick look to see if re-opening the trail down to Williams Creek Main / J50 might be an option. The snow was pretty much gone, 30 feet or so that we had to work a bit to get through, otherwise a non-issue. From the top, the connection to J50 looks like it could be done fairly easily, but I’d want to check it from the bottom before commiting. It might be that the alders are big enough that it could result in a great steep shaded track up the spine.

Most of the photos came from the creak that runs off the edge of the world/ridge at the broken down bridge.

Chased a bear cub up a tree by accident while coming down Walker Main.

We needed to get back to Muir to check out the E10/11 connection, and the plan was Butler -> East Main -> Alligator -> Muir. My brain is still scrambled with all the various blocks that were at the end of East Main, and not the new block which is somewhat down the old track. Anyhow, we went over the dirt dam, and along the MTB trail that connects the break in old East Main. Checked out the water level at the big Diversion dam, down to and along Alligator.

On Alligator, Rob’s experiment with threads in the aluminum subframe produced some definitive results (don’t count on them, use a through bolt and nut if you can) here. It cost him his turn signals, but the tail/licence/brake lights continued to work fine from under a bungee cord :) !!

From Alligator, down Muir to the yellow bridge and pull a right before crossing it. Here we got test our respective GPS basemaps (OSM won), and my memory.

The E10/E11 connection was in far better shape than I expected. I thought we were going to have to hack our way through, but it’s in active use by quads: muddy in spots, and one creek crossing with a nasty step up on the far side if you’re going SW like we were. That said, the whole connector/loop track was a lot longer than I expected. GPS said to go counter-clockwise from the connector, and that took us through some forest that must be getting close to being ready to log again as the ground layer was wide open and there were some BIG stumps from the first cut.

The original plan had been to try to connect to the E10/E11 loop, do the loop, return and exit from Muir, but I had a schedule (that I missed) to be at my Dad’s place, and time forced us to exit via East Main and slab it home.

A great day, a number of new squiggles, some great pix, some hard riding, no injuries and nothing more than turn signals broken (I hope).