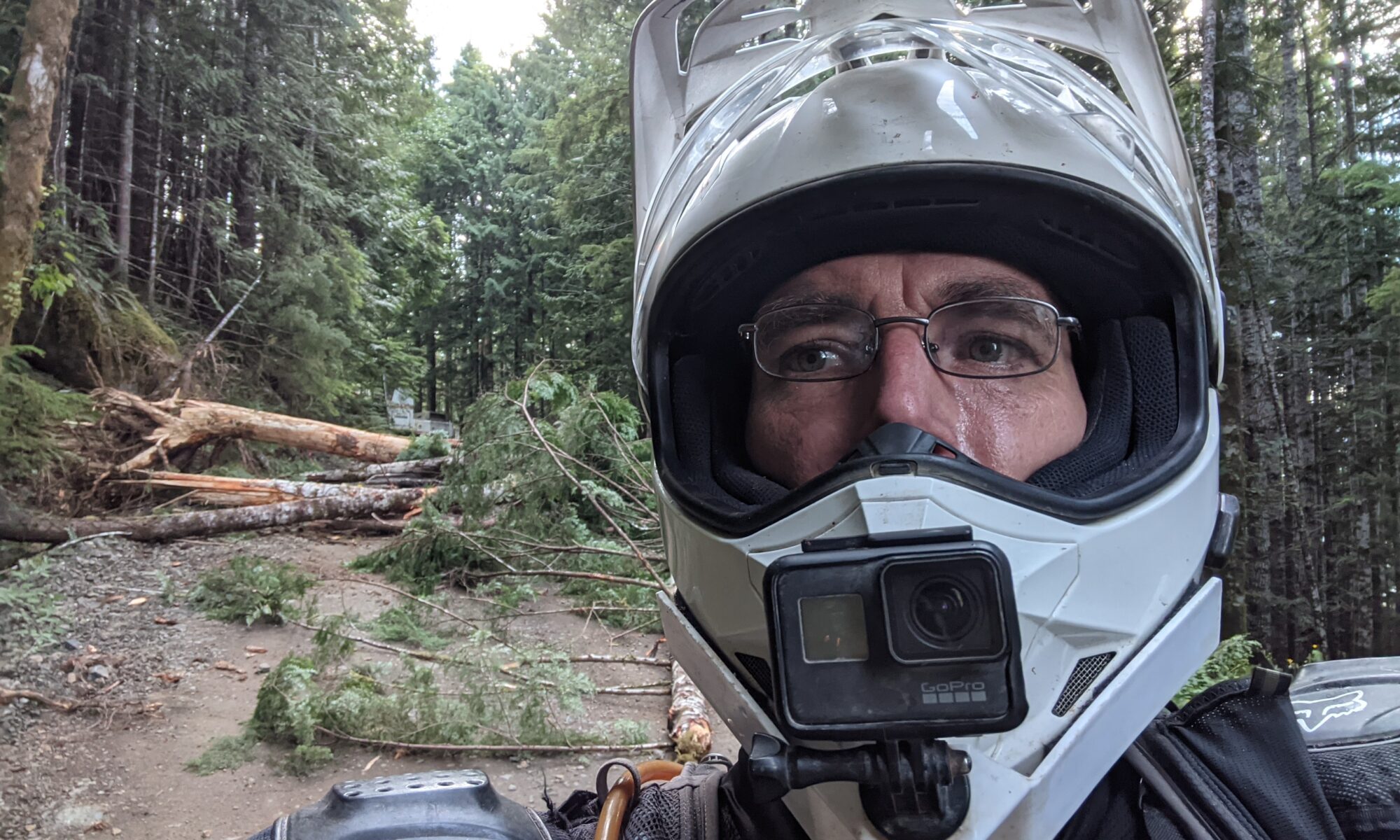 Day 1 was a really mixed bag. I headed out of the campsite with the idea of going up and over the mountains toward Nahmint Lake in the west. This was in my books a scouting/exploring ride… see if the connection could be made and what the options were, add roads that were not mapped etc.

Unfortunately I had left Victoria in a bit of a hurry (wanted to get to the free campsite on a Thursday to get a spot), and didn’t fill up the bike … so after spending a few hours running up 1110 and pushing through, I was getting range anxiety and didn’t explore as far west as I could/should have.

You can’t ride around Port Alberni without seeing Mt Arrowsmith … so after getting gas and checking e-mail, I thought I’d head back up there and see if I could find my way farther east. When I got to Cameron Main the roads said “open to the public on weekends” … this being Friday I decided to come back later.

That worked out well, as the next idea was go north toward toward Lacy Lake, possibly check if the connection to Horne Lake was still open. That took me up to the Forestry Lookout, and I met Jean Philipe on the way back down. He ran me through to Lacy Lake and back down to Alberni, as well as giving me some ideas for the next day (reminding me I was in the area of Yellows Creek mine).

After splitting with JP and topping up the tank again, I headed for Summit Main. I was still hoping to be able to run west. Somewhere in here I got confused, because I thought the overgrown tracks running south from Summit connected to the overgrown tracks I’d pushed through (off 1110) in the morning… but that’s clearly wrong as Cous Main runs through the middle. They did look much the same, somewhat overgrown, good surface, just needs to be used / cleared. I can only assume this was my normal “wrong scale” GPS reading mistake.

Any how, Summit main has a neat little lake at the top, but there is no good connection running through.

Running back down summit, I thought I’d take a stab at what I thought was a route posted online, and which had been suggested to folks new to riding on Vancouver Island. With my (now) more experienced eyes, I realize I got the start (relatively easy) wrong … but the bulk of it was correct. There were old quad tracks ahead of me, and sections that showed obvious trail clearing work, but none of it fresh.

This was one of those “sucker” tracks. I didn’t want to do anything hard, the plan was to turn back if it looked like it was going to get the least bit hard, but there were no “oh oh” moments until I was way into it. It was almost as if the difficulty slowly went up the farther you went (e.g. the more committed you were).

Anyhow, there was one quite sketchy creek crossing, one chunk where I somehow almost lost the bike over the bank, and at the end, there was active logging and they’d used the excavator to block the road with trees instead of “just” a gate. All in all, I was damn happy when I finally escaped. (“Survival” might be an exaggeration, but “escaped” is not).

I believe I ran straight run back to the rec site from there. Dean and Selena (?) had inherited Niklaus’ campsite. I had forgotten the BBQ, so I mooched off their campfire to cook my hamburgers (I did bring a grill). I spent more than a few hours with them, not quite as philosophical as Niklaus, but that makes sense, they’re neither young nor old.

I’ll try to snag a few stills/frames from the GoPro footage. I don’t seem to have taken any stills from the Forestry Lookout, or Lacy Lake, etc. There’s certainly lots of GoPro footage.