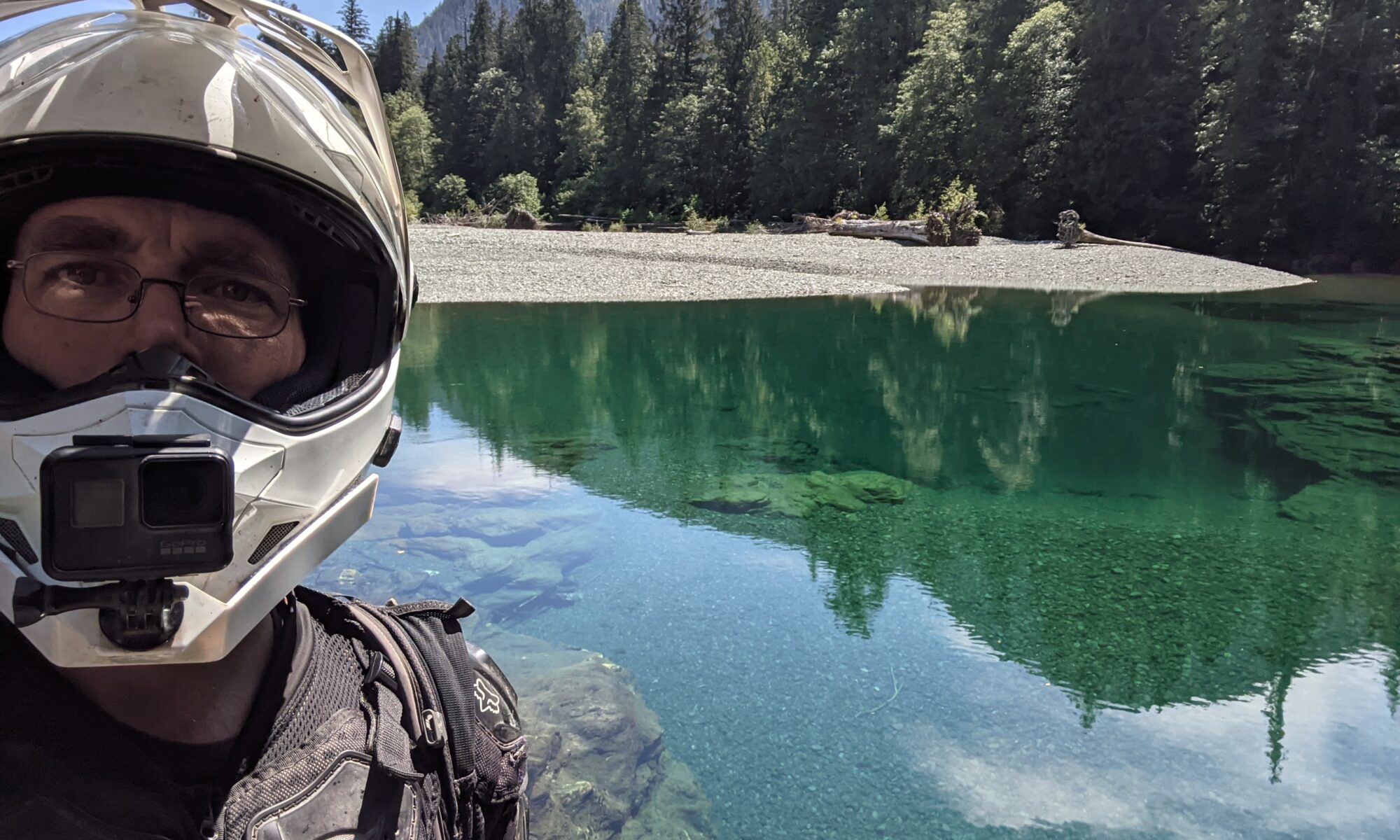 For some reason, this was the “best day” in my books. That might be because I was getting tired and took a more relaxed approach, it might be because I stuck to more mainline roads, maybe it was the weather, which apparently triggered some heatrash. It might be the awesome Nahmint River pictures. In any case, it was time to run “farther west”.

For the the first time, I turned left and headed farther down Canal Main when leaving the campsite. Mainlines IMHO tend to be boring, but it is the big ones that are the worst, and Canal Main is a small one. That had me pondering the question, was this a do once ride, or was it something I might come back to?

There were the usual little tiny side tracks that all seemed to lead to campsites or viewpoints.

I had to make a choice at the Nahmint Main / Lake Main fork. Go up the west side of Nahmint Lake, or see if I could take Lake Main across to Hucuktlish and ride up the west side of that to my “possible viewpoint”. Given that Lake Main would save me backtracking, I suppose it is inevitable I took that option :).

Nahmint and Hucuktlis Lakes run pretty much parallel to each other, and there is a substantial ridge between them. My route crosses this ridge at both ends. The climb and descent is not hard, but not trivial either. In my experience there were more loose rocks at the south end of Hucuktlish than the north end where the road was more “surfaced” (rocks exposed but not loose). The climb at the north end of Nahmint heading toward Gracie lake is also steep and rough/loose. Not trying to scare anyone, just telling you what to expect. I wouldn’t send a beginner on a big bike over any of those tracks … nor will I run them in my van, but any 4 wheel drive would be fine. (Assuming I get the video edited, it will be shown.)

I don’t have any pix from Elbow Creek as I leaned the bike against the gate and walked in, only to have to run back up when the overlander guys wanted to open the (dummy locked) gate to get out. I have ordered a new kickstand, leaning the bike against stuff sucks.

And this was probably the highlight, certainly IMHO the defining scene of the trip.

From there I rode north past Gracie Lake, and then west along the southern edge of Sproat Lake out to the Snow Creek rec site. I wanted to see if there was cell service there, as it is on the edge of the Telus coverage map (there IS service).

From there I headed west back towards the campsite. I checked out 306, 304, and 302 (again) which were the logical candidates for connections from Stirling Arm Rd to Summit main. 306 was a nice enduro style run, and it gets “close” to the end of Summit Main, but there’s a ridge in the way. 304 seems to be well used, but the well used part is just a track to a viewpoint over Sproat Lake. The fork that might connect to 302 is less used, and became pretty much unused after a creek crossing that might have been a removed bridge. Given that you can’t currently get out on the far side (excavator/tree blocked), it doesn’t seem to matter. I ran up 302 just to bookmark the blockage, and I looked at an un-named track, but it’s so overgrown that it is hard to spot.

There’s a long story behind this beat up boat, motor, and trailer with a missing wheel. I got it second hand from Dean and Selena, but it ties into the campsite. Worth remembering.

Getting back to the van, I learned that the house battery was not charging from the van battery. That is possibly “on purpose”, an automatic battery isolator thing that refuses to draw down the vehicle battery. But the house battery charges so slowly that running the van makes no sense. That meant I had no way to recharge the electronics (phone, GoPro batteries, etc). Combine that with a mild heat rash, and I decided that I’d head for home instead of riding Monday and/or Tuesday.

I should note that there are two walk-in campsites at Arden Creek. I didn’t get any pictures as I was trying to charge the phone, but one of them is gorgeous … six feet (vertically) from the water at high tide. It IS a bit of a hike though, 200 meters?

So, would I ride this again? Yes, I’d go back to show this to others, or to continue the exploration. I’d forgotten there is supposed to be a waterfall up Nahmint Main, and I almost certainly failed to find the Hucuktlis lookout.