Had a reasonable ride on Sunday, gpx trace below (in blue)… basically through Blueberry flats and up Muir Main. The red trace is from don’s adventure travel (Hidden alligator lake ride #3), and was part of the logic behind this particular route. (Green traces are other days, some of them later.)

This is the culvert that marked the north end of the ride for me. Passable if you have a better bike+skills, or time to build up the ramp, but winter days are short. 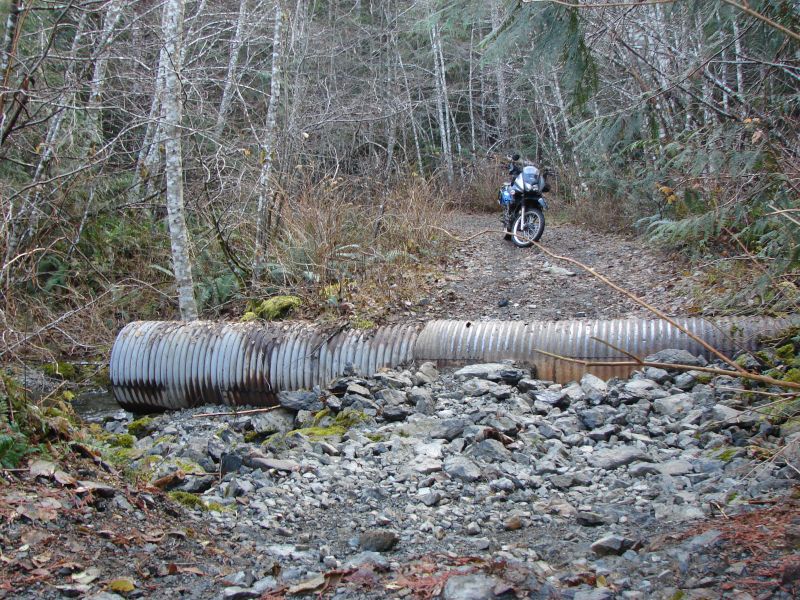 right, and anyone know what the dang blasted holes in the rock filled with water are for? I must have passed half a dozen of these. 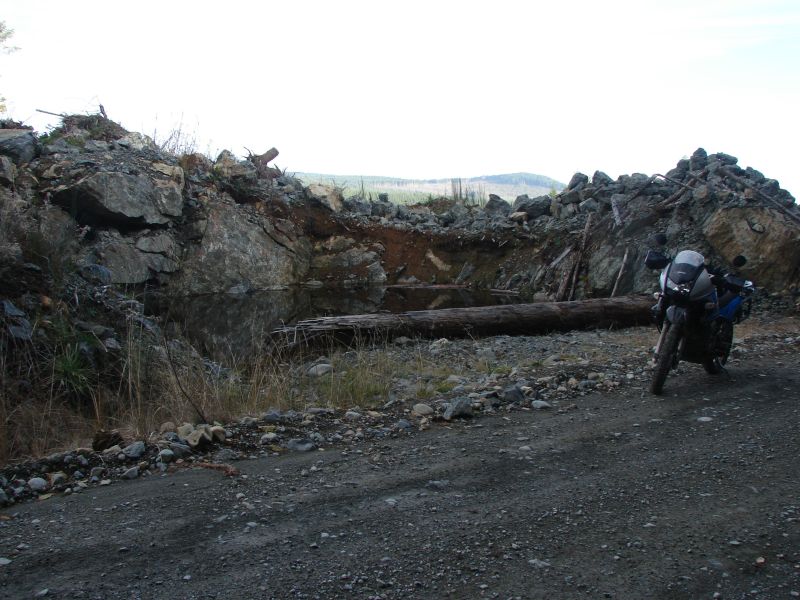 The East Muir (Muir East?) fork has a bridge with a wonderful looking stream. Not sure what it would be like on a hot dusty summer day, but one would think it would be wonderful. (Waypointed as “Muir Creek Little Canyon” in Don’s GPX track). 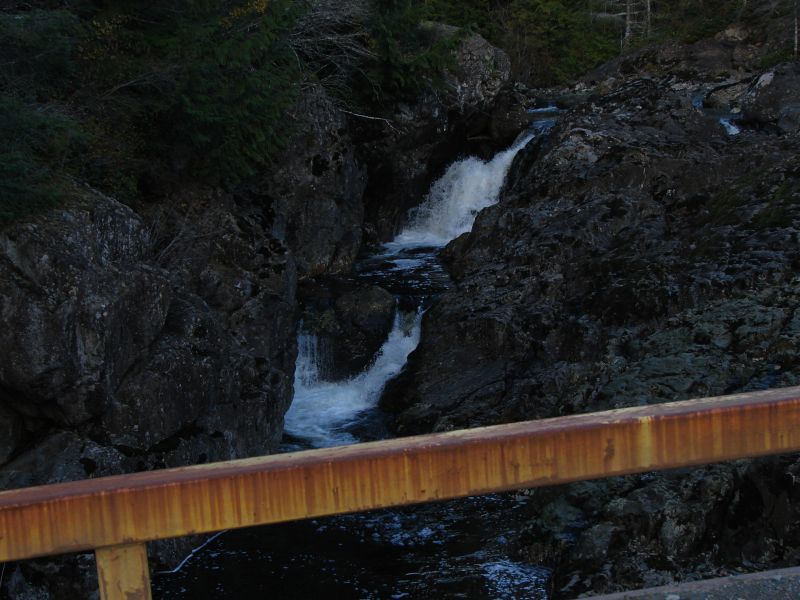 And my ride southward on East Muir (or Muir East) was blocked by this tree, but now that I’ve seen the satellite imagery, I don’t think the road went much further. 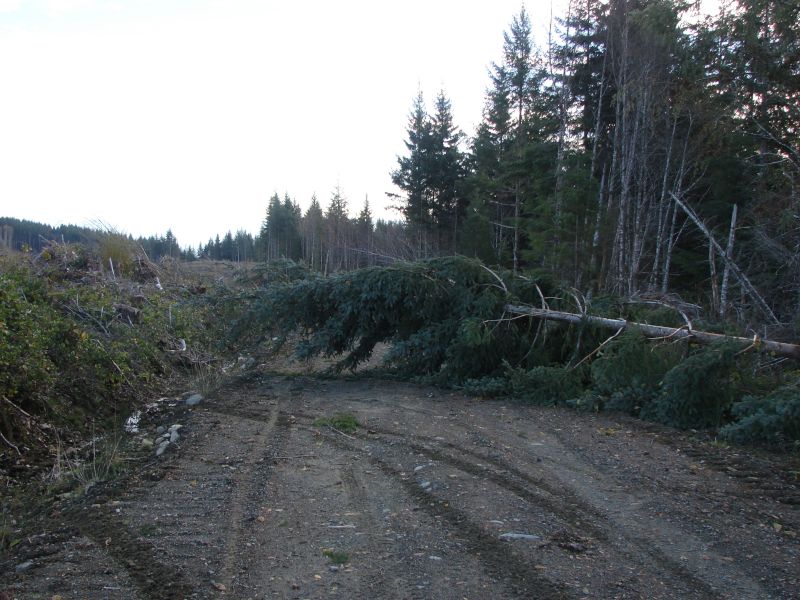 I wish I had knobbies like the guys who’s trails come out of the ditch must have had :).
More interesting would have been the road to the right of this junction, which was heading north from the bridge shown above. 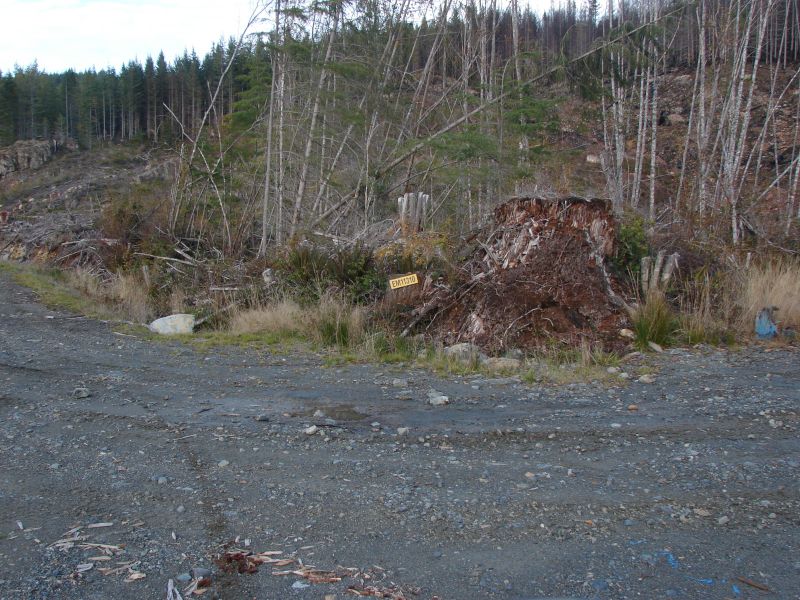 … which now that I look at it, and having seen the satellite imagery, does show signs of a fire. Anyhow, at this junction (EM 11310), the road to the right should connect via some wandering, to Butler Main, which would make a not bad circle route, assuming it comes out below the active logging that I hit a while back. And Mt Muir (880m) wouldn’t be far off that route… and the road should get up to 800m. Something to check out.
Other thoughts.
The north end of Muir Main was NOT an easy gravel road ride. parts of it are loose (large) crushed rock. The spur to the West I took was a steep climb, the main road badly washed out, but the right shoulder was not bad. At the top it turned into a narrow trail … like the end of Muir Main (with the culvert). I stopped at a small tree across the road, I probably could have gotten over it with no trouble, but was being conservative… and wouldn’t want to have been wrong :)
Boyd’s Pit / Blueberry flats… that whole area was much simpler than I expected, with the possible exception of the narrow single track, root covered trails… but those were rare (I only rode those to get from the highway to the main trail/road). The area is flat, and the soil is pretty sandy, so while there was some big puddles, most of the trails were pretty dry (November). Getting into the back area from the highway took some trial and error. The landlords have tried to make access difficult. The main trail shown in Don’s GPX track is effectively blocked. There are inbound trails both to the north and the south. Getting through the woods to the main track (a couple hundred meters NE) was easier on the southern track shown… in fact I was expecting one last challenge, and was surprised to find myself “already” at the highway while exploring at the end of the day.