Good: Not the fountain of eternal youth, but seemed a source of endless adventure. Neat waterfall, the GPS suggested route “worked”, some challenging riding. Bad: waterfall behind gate, GPS suggested route requires passing a gate and is too difficult to suggest to others, stopped to be friendly and got chewed out for riding a motorbike, several OSM/GPS suggested routes were impassable. (But see update at bottom.)

Left late Friday. I had tried some meteorite pictures Thursday night, wanted to try some “dark sky” pictures Friday night. (Didn’t work, too overcast.) Did not not sleep well, couldn’t get to sleep, then got up for dark photos at 2AM after moon down, and then up with the sunrise.

and now for something completely the same but different.

I’ve been up on the summit before, but never really explored it. Which explains where some of the time between waking up shortly after 6am and leaving at 7:40 went. 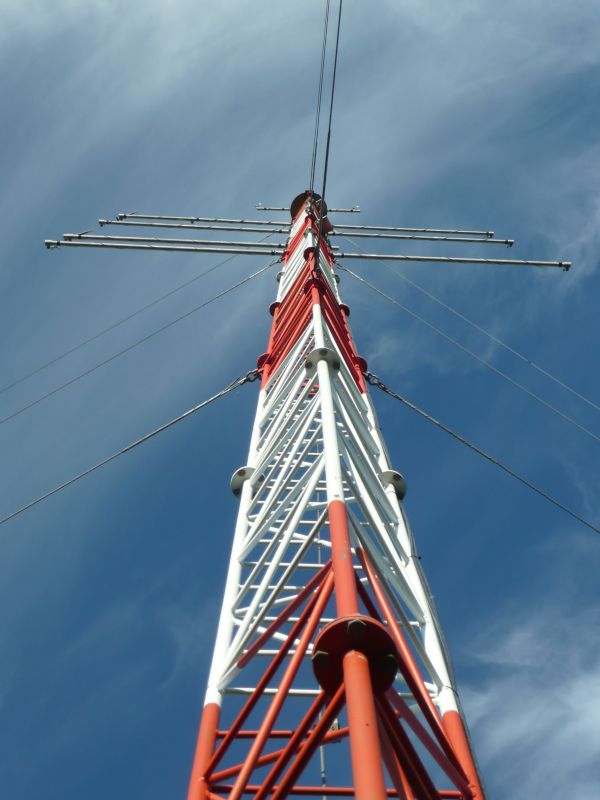 I checked out the road to Ranger Lake on the way down into the Bear Creek valley. It looked like someone had been in there with a 4×4, so the road (as far as I walked it) is pretty good. It is on my “to ride when the DRZ is back together” list, but it _might_ be doable on the KLR. (Update: you MIGHT get down (south) on a KLR, but I wouldn’t try going up solo. See 2016/12/04 blog.)

Someone asked me if I’d been to the W Leech waterfall, and they talked about how they used to go “swimming” there as a kid. It’s just behind one of the watershed gates… an “easy” walk. That turned into an adventure. I have no idea how they used to get there, unless there was a trail in/down from the far side of the river. I walked down the river to the head of the falls. It was a scary/steep dropoff, but looked like there might have been a trail to the base from the west, so I went to try to find that. Found a trail to an “overlook”, but no trail to the base. Backtracked and followed the slope down to the next creek, but that was hard going, lots of deadfall and steep sides. The GPS suggested I was going to come out too far south (and it was getting scary steep) so I left the creek and scrambled sideways across the slope trying to avoid the steepest bits. It was not fun, but it got me to the area I had seen from the top. Climbing down to the falls from the west is a bit scary/intimidating. You’re going down a very steep slope of BIG chunks of slate, and you realize you’re on a rockslide debris field… with rock almost overhead.

Instead of thrashing back through the bush, I decided to climb the rocks on the right side and walk back up the river (again). Slopes always look easier from below than from above. Still, this wasn’t a fun climb in MotoX boots.

It was hot out. I was in a T-shirt and shorts with a light jacket when I got up at sunrise, and within the hour it was too hot for the jacket. Sooo, water stops became important, especially since rivers and creeks big enough to have good flow are rare at this time of year. After the falls the next destination was Mt Valentine. After a side trip up a route that the GPS/OSM recommended, which didn’t work out, it was off up Butler, to W Jordan, and then to the spurs that go to the summit.

The road up to the summit was an interesting mix of beautiful old logging road, and fairly darn steep climbs up loose crushed rock. Nice panoramic views from up there… just don’t look too close for a couple years until the clearcut scars fade a bit.

From Mt Valentine, it was to be up to Maid Lake Main to try the route S to Lens 6000 and out via Port Renfrew. Well, I made a wrong turn and ended up on a neglected road. The GPS/OSM said it could get me to the S end of Fleet Main (next waypoint), so I continued.  I ended up taking pictures of road cave-in’s I had seen before (Gareth’s posts).

That was not a fun crossing. I had to back up and get a run at it… e.g. no proceeding from a wobbly start. That would be 15+ feet where you have to stick to a path no more than a foot wide. The fall on either side wasn’t that great, but it definitely would have been ropes and pulleys to get the bike back to the road.

I got a little worried after passing that hole, as the road became quite a bit more overgrown… and there was another hole.

There was some fine scenery and views along this road, as it is on the N edge of the ridge which slopes to the S and drops off to the N.

And then … “disaster”. The GPS said I had missed a turn. Given that I usually stop to check directions at intersections, this was not a good sign. Backtracking took me to an overgrown road that the GPS though was usable. It wasn’t. Which means I had to ride that damn tightrope back in the other direction. The road would have been good, it was supposed to the N down the spine of one of these many hills. I scounted it out later, the other end was even more overgrown, so I expect that most of the 2km of the road would have been darn difficult.

So, I backtracked, and rode up the correct route. Chased a young bear or two off the road. Flushed many grouse. etc. Rode up Fleet to Maid Main, and started up that climb.

I was getting pretty darn tired by this point. It was getting on 4:30, and with the exception of the 2 hours hiking around the falls, I had been riding for about 7 hours. I stopped on the road shown below, mostly because it was spectacular enough I wanted the GoPro, but it had run out of juice. This was a hot place to stop, south side of a steep slope… but there was some thermal wind.

From there, the narrow sketchy road when toward the Mt Demers summit from the S side. A road Y’d in from the right during a steep section. The GPS said I’d missed my turn. That was the hardest part of this route. At the 180 turn, the new (narrow) “road”, was badly washed out with large sharp rocks all over it… so it was basically paddle down that keeping the rear brake on as much as possible… probably 50 to 100 feet of that before it got to the point I dared to “ride” it… and it got better quickly. If it were not for that chunk, I’d be willing to recommend the route to “good” riders… but as it is, it really is not an appropriate place for a dual sport bike, especially a loaded on. The fact that there was an unknown gate still ahead of me also detracts from the route’s usefulness.

The gate was pretty much a token. I’ll have to check my maps, as I would have thought I was out of the Timberwest land grant by that point. Anyhow, there was space to get by it, and while there wasn’t much traffic by-passing it, I was not the first.

I didn’t take pictures (I do have some video), but the last bridge on Bear Main before it hits the highway crosses Lens creek. Coming from the highway, take the first right and then right again and you’ll be riding on the creek bed. Looks like a gorgeous place to camp.

From there it was onto the highway, and making good speed for home… except I got a bit of a shock. After hours of cooking hot weather, it was suddenly cold. I guess the hot thermal winds were sucking fog in off of JDF, either that or there was some pressure system causing/contributing to it. Winds were strong near Sooke too.

And I took a bunch of shots of this railway (?) trestle, which is visible from the last bridge heading N out of Port Renfrew. Stopping here for pictures had been on my TODO list for a while.

That’s it. Another LONG day of riding. Bike started to sputter right outside the house… shifted to reserve in the driveway :) I think that was about 310km from the last fill. Just gotta remember to put gas in it ASAP.

I’ll try to get video edited. Not entirely sure what I have, as the camera got left on at points.

As to the title? Yes, the route worked, except it isn’t useful. The waterfall was neat, but it’s behind a gate. The riding was good/challenging, but the one truck I stopped to talk to had basically nothing to say other than “motorcycles and ATVs aren’t allowed here” … and while I’m relatively sure that any category that includes ATVs is probably about unlicensed dirt bikes… I’m kinda sick of being actively “not wanted”.

June 2017 update: I’ve been given a GPX track (thanks Garry) that shows an alternate path down from Maid lake that skips both the gate and that nasty descent. I haven’t actually ridden the track, my understanding is it might not be big bike friendly.