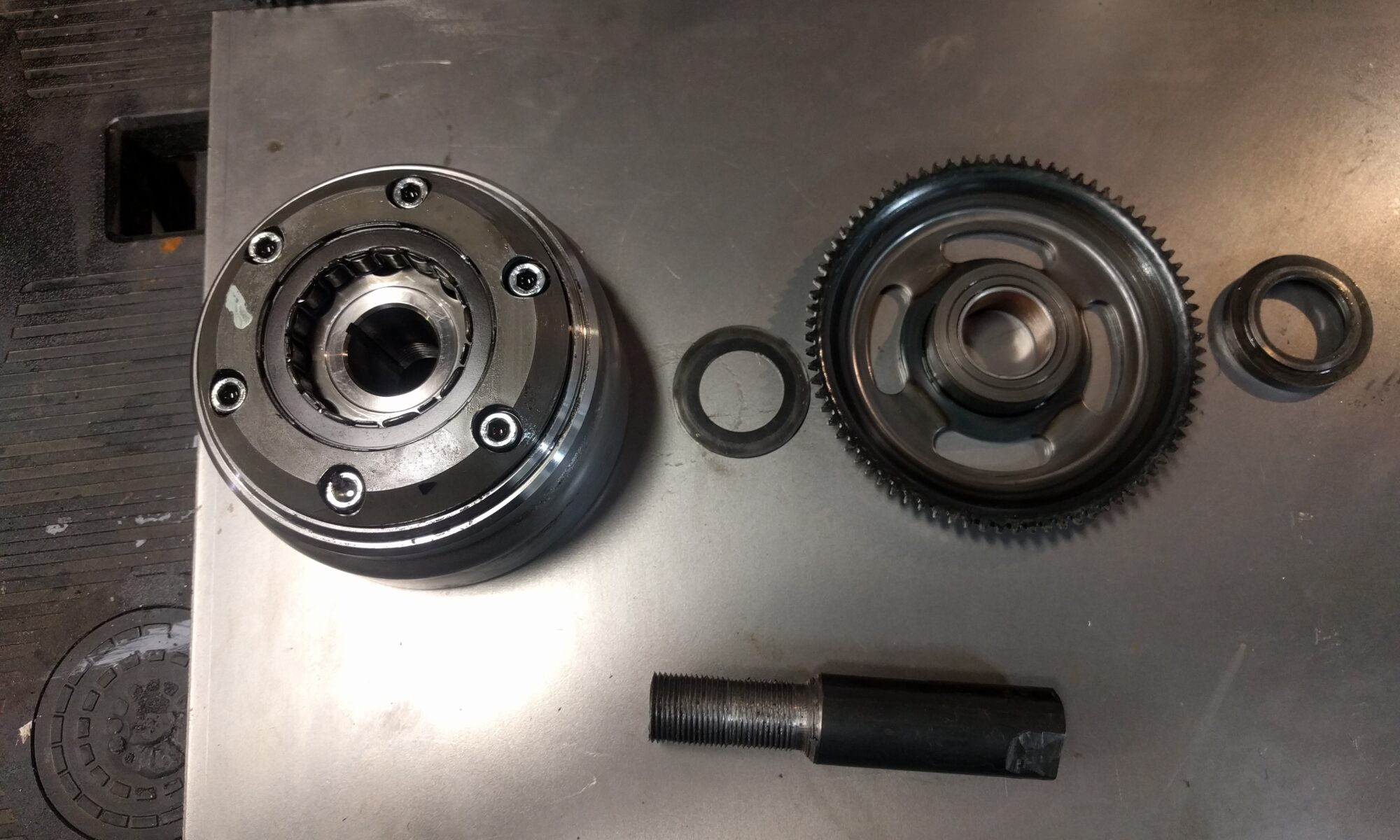 Nope, not dead yet. But I did need a break after that Hare Scramble (and maybe even before it).

I’ve mostly been doing mechanical stuff. I finally got the TIG welder going, and have now burned through two bottles of argon. Some guys can do sheet metal with TIG, but I haven’t yet figured it out.

Anyhow, this post was mostly just some gearhead notes.

I spent most of the weekend servicing the lathe. I took the headstock apart and now understand the interconnections better. I suspect I simply wasn’t pushing in a locking pin far enough (it has a locking mechanism which is working).

After that I had to mess with the half nuts, they are worn and were slipping. A little silver solder removed some play and seems to make them work.

After some research and messing around, I managed to cut threads at a 1.5mm pitch. Which meant I could actually build a KLX 250 flywheel remover. If it wasn’t the weekend, I could have just bought an M20 (fine thread) bolt.

So that let me take the flywheel off the motor I’ve been working on, and on which I should NOT have re-installed the flywheel without checking the parts diagram. The KLX has an odd spacer on the inside of the starter ring (rightmost part) … I had left it out. I also didn’t know about that big washer in the middle. Bottom item is the KLX 250 flywheel remover. M20 x 1.5 threads with some flats at the other end for a wrench.

(Vent: The kawasaki engineers did NOT build in a way to hold the KLX flywheel, the suggested “specialty tool” is a heavy duty strap wrench :( On the DRZ I would not have needed to torque down the flywheel nut, which is how/why I got into this mess.)

Bob got himself a new starter (sprag) clutch. This is the old and new starter gear that goes into it. New one looks good.

And while cleaning the filthy grease covered stator cover I noticed that the bushing for the idler gear which links the above starter gear to the torque limiter … is totally shot.

Same shot but backed out for context. The cause for that would apparently be the following. Which I believe is the “A small part of my KLX crankcase broke” that Bob originally referred to.

That’s supposed to look like this (without the crud in the bottom of it).

Anyhow, that’s some of the stuff I’ve been working on. This is just a “greasy fingers” post… that said if I’m playing catch up, I really should include a pic of the grandkid’s cart I built. Still working on this. That seat is hinged, and I’m trying to build a box under it. I also have some sound effects that mostly just needs packaging… and of course there was plans to motorize it, but that’s pretty foggy so far.

I’m half convinced that all kids toys should be built well enough for adults to ride…. : )