Interesting day, forgot the GPS, navigated mostly by memory and some luck over Maid Lake Main, then back via Lens and Fleet. Did scratch the bike :(

I thought I’d be able to pull a graphic off of Google maps, but it’s even more wrong that I thought. Google doesn’t think Kapoor Main goes through to Fleet (via Renfrew), it shows a loop through Fleet 600 that I should look into (gate off of Fleet main to Fleet 600 is just dummy locked, there isn’t even a pin for the gate).

Anyhow the route was W down Kapoor Main, Renfrew Rd, to Fleet. Up Fleet to the bridge over Fleet River and then just past that, W up “Fleet 500” (Maid Lake Main). That is a neat climb, up to near the summit of Mount Demers. The road is in pretty good shape, but its steepness does mean it isn’t an easy climb. There wasn’t any getting off and pushing, or making changes to the road, I think I did have to stop once or twice because I wasn’t on the line I wanted while making steep ascending turns. Call it a 5 or 6 on a scale where 10 would just hit “impossible” for me on the KLR. From the actual lake I continued W to Lens Main. N up West Lens main to Fleet, E and S down Fleet back (past Fleet 500) to Renfrew, and back to pavement via Kapoor.

At the Fleet / Renfrew interesection, I did continue W on “Renfrew” on the way out. Coming back I did a detour to the S on what appears to be an extension of Fleet. That actually would have worked out well if I had the GPS with me, as I came out on a wierd 3 way intersection (weird, because all three roads wen nearly due east). The roads were all in good shape, but all I had for maps was the BC backroads mapbook, and it didn’t show anything. Turns out the “middle” road would have taken me to West Jordan, about halfway down it to Butler. Doesn’t look like it should be steep, so it should be in good shape and needs to be checked out.

Navigating was interesting. The bridge over Fleet River (Fleet Main) is apparently at about 400m, and this was under some clouds. I was worried that I’d be needing a compass, but the cloud layer was pretty thin (climbed over it) and going West over Maid Lake Main was relatively easy. Coming the other way, it would have been much harder to sort out the “main line” from all the spurs.

Pix, in timewise order. The 6km gate at Kapoor Main. I’ve never seen this one closed, but I figure that if I had to, I could get the bike under it on the ditch (right) side.

One of the detours I took was to run up the Todd Mountain road off of Renfrew Road. I then took the first spur on the right (up) which was marked as E123. Near the top of that I got off the bike and hiked up the hill a bit, but given that I’ve got a surplus of “landscape” shots I won’t bore you with those. But it was only a couple hundred meters to an alternate peak of about 850m that looked down on logging on the N side of the ridge.

This shot is from the descent on E123. I believe that’s the Todd Mountain peak shown on the right.

Another detour was continuing on Renfrew Rd PAST Fleet main. I gather Renfrew Road went all the way to Port Renfrew, but they deactivated a bridge (was this the hanging bridge?) about 1km down the way. Anyhow, down there I ran into this strange piece of machinery. 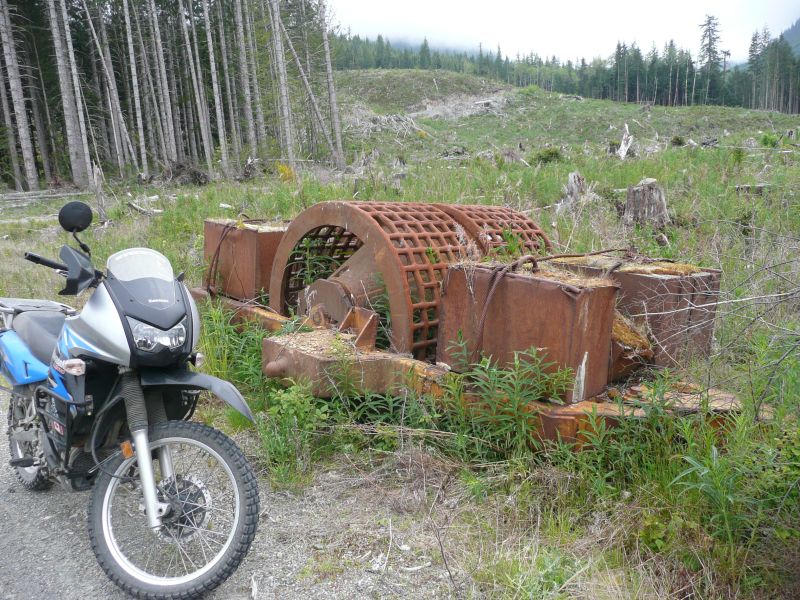 I’m not sure what to make of it. It was clearly towed, there’s a hitch in the grass on the right. It looks like it was just a roller for compacting roads… a bunch of metal boxes filled with concrete stacked on both ends to make it very heavy. But if you look at those “wheels”, they have funny drums inside them, and at least one has a scraper on it… 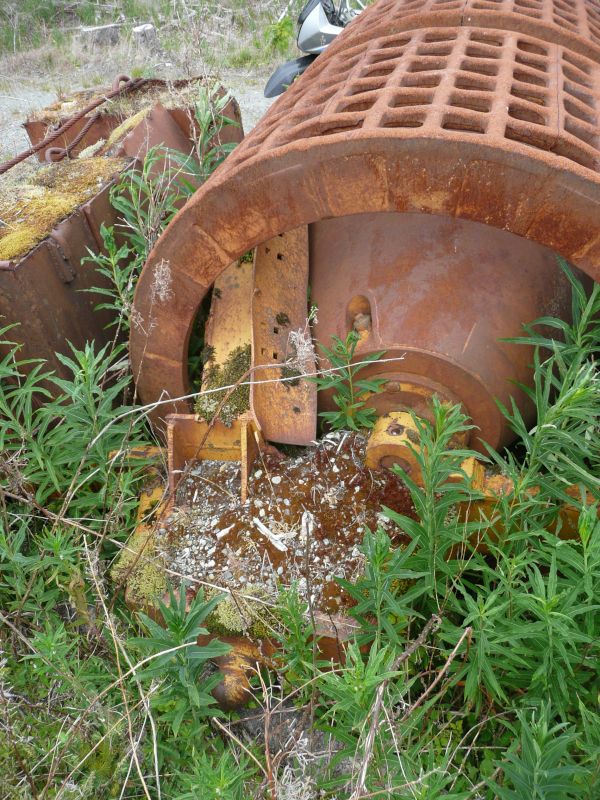 No idea what to make of it. I’d like to have thought it was a rock crusher, but the orientation and weighting are all wrong.

This little water fall is just at the start of the Maid Lake Main (marked as Fleet 500). 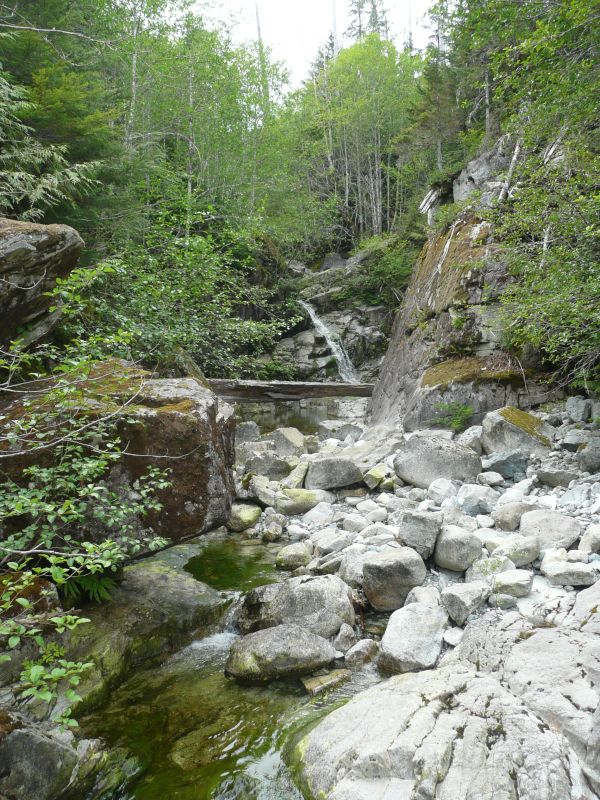 It IS one of those that isn’t as nice close up (unlike Lens Creek).

I got a chuckle out of this Modular Bridge system on top of an older bridge.

Still not sure what this tear down the hillside was, but the ascent up Maid Lake Main is pretty steep. 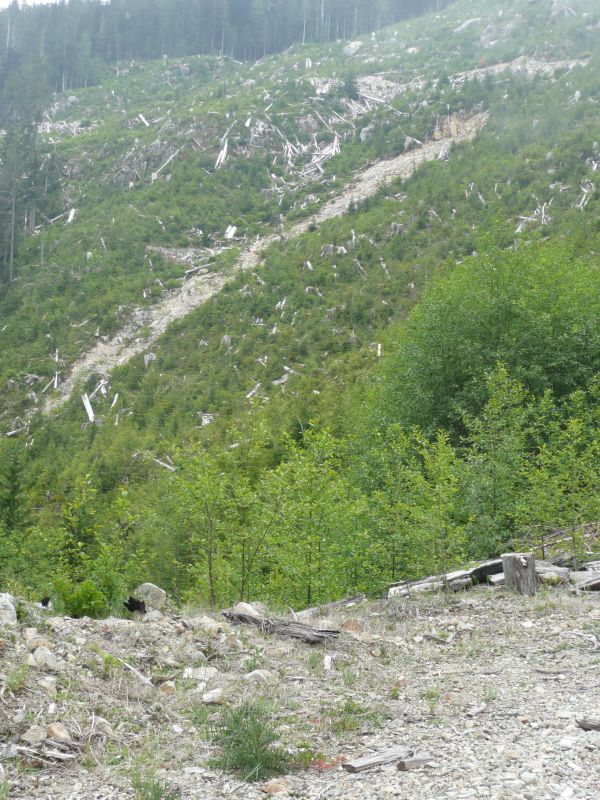 Part way up the ascent I stopped to look at what looked like a deactivated road. 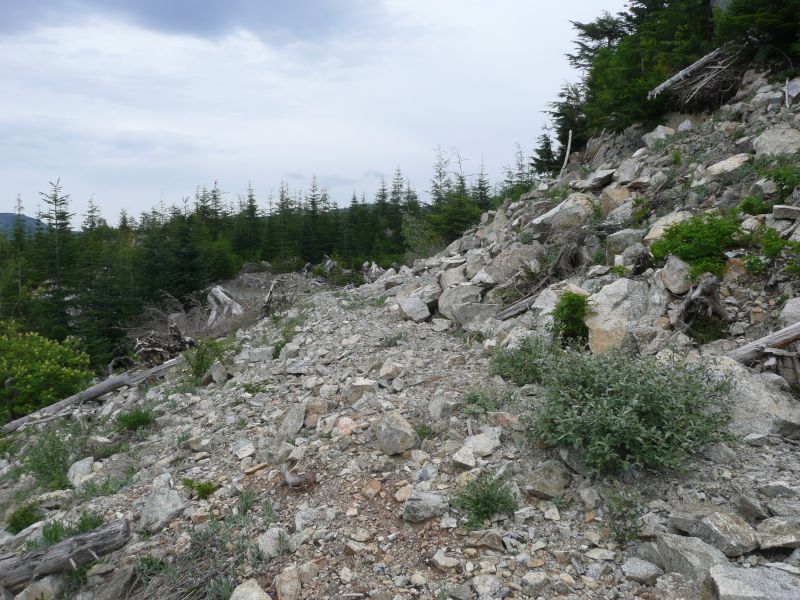 That is looking back toward the bike, it isn’t much more than a trail now, but OSM seems to suggest it was a spur. I wish I’d taken more shots facing the other direction, as there was a neat ravine running up this side of the mountain, but I kept thinking I’d get closer, and I did not :(

I took a number of versions of the following shot. The road in the center foreground is Maid Lake main. The horizontal dash is the Fleet Main bridge over Fleet River, the road running directly away is Fleet 600, and I have no idea what is up on the far ridge.

Getting pretty close to the microwave relay tower on top of Mt Demers at this point: 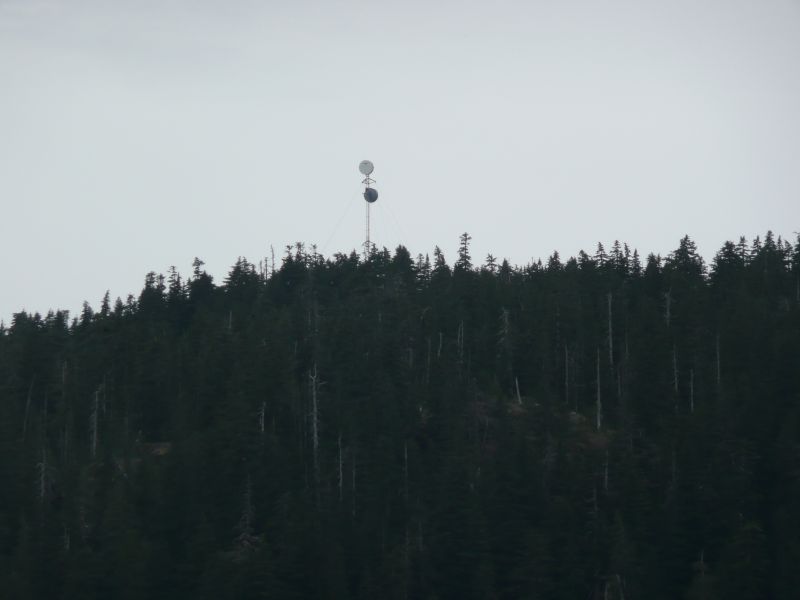 A couple shots looking down on the clouds:

Ahh, here we go, this is the zoomed in shot of the Fleet River bridge that I described above.

Same shot, less zoom. Fleet main is sort of visible on the right side of the river headed to the lower left. 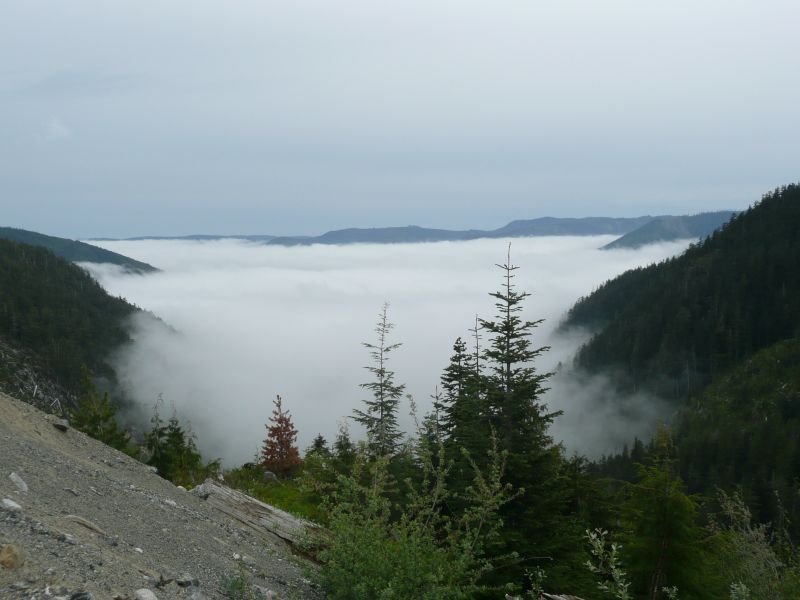 This was the very steep (and short) spur that should have taken me up to the 1000m mark. I walked the last of it (maybe another 50m).

And this won’t come out well in wordpress, but IMHO the best shot of the day was this pano taken from the end of that spur. Click for the big version.

Stopped here as I noticed some of the luggage rack fasteners were working loose.

I’m not sure I’d want to camp up here, but there certainly is a nice little campsite. The road/bike is just up to the right.

The road down (still going W, so down to Lens Main) was recently graded, much more a mainline than the road up from Fleet. 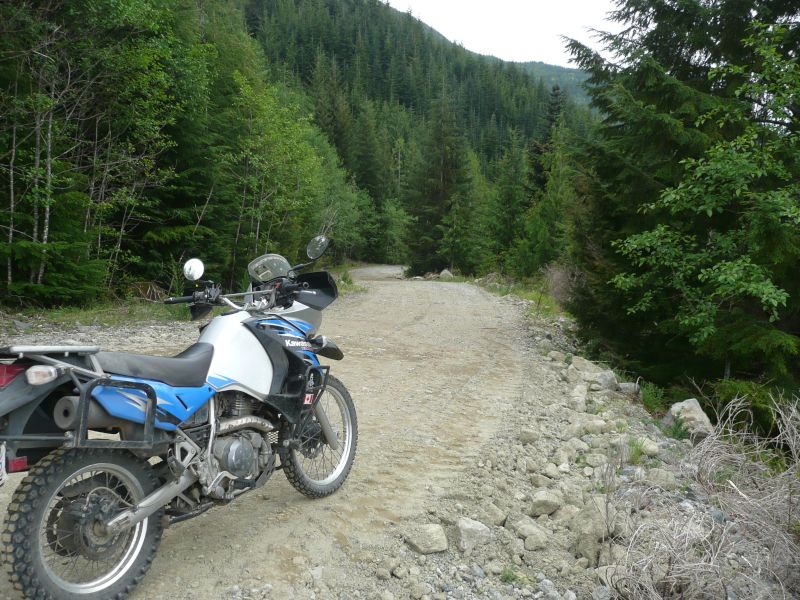 Maid Lake main comes out a couple km south of where Lens Main forks/merges into W and E Lens Main, which means the bridge/pool is close. Stopped there and clambered in to look at the upper pool.

And the last shot is of the “scratches”. I got distracted by a sign and missed the corner. I’m going to blame this one on fatigue. I considered not riding this day, but the forecast for Sunday was bad, and I’d been looking forward to the ride all week. The reasons against riding were my having come down with a very sore throat and congestion the night before, causing a lousy sleep, and I’d had to get up and drive Denna to a ferry pickup very _early_). Contribuiting to the fatigue was the sheer distance and the fact I had been pushing hard and practicing “foot steering” from a Trials riding lesson I’d read the night before. I was _not_ pushing it at this point, but I obviously hadn’t backed off far enough either. I managed to dump some speed, but no where near enough. So this was the first time I dropped a bike while still having speed on. (30-50km/h) Cost me another crack in that front left fairing, and the turn signal, and a little scuffed skin… but far less skin than the last stopped drop where I forgot to get my foot out from under the bike (duh, gotta do it wrong every once in a while to remember what right is).

Gareth (Tropic of Canada) came by whilst I was cleaning up, trimming off the turn signal, etc. Was good to meet him, but not the circumstances I would have chosen.