Tony started an email thread, asking if anyone wanted to ride this weekend (silly question :). Rick bailed, Wyatt couldn’t commit, Bob was out of town… so it ended up being Tony and me.


This was a good ride. It is NOT a trivial ride.If you’ve finished Beginner and are well into Novice, then consider it. Scale that difficulty for the KLR 650 and GS 800 we were on. That said, the first 1.5 km or so (below the railway) is excellent training ground.

We started at the “red gate” that has been noted before (just north of Skylar/Wright)… and started up the hill led to by the first right. That is steep and “rock” filled. I’d have sworn I’ve been up there before on the KLR, but we turned back. I’ve seen what happens if Tony and I push each other… it gets ugly. The idea of going through the Mt Wood area was to put a “nice” ride into Tony’s “road atlas”… so hard stuff wasn’t really appropriate.

Going back down the turn just inside the gate and following the other path North led to a much easier climb. After a bit of exploring, and then asking questions of my GPS, we learned that to get to Oliphant, we had to clear a small log out of our way. So, hatchet in hand, we did just that (48.61/-123.61). Some beautiful riding from there to Oliphant. Many of the roads are lined with big tall daisy(?)s, so you were sort of riding through a flower bed. And the tall flowers with the trumpet shaped flowers were just starting to come in. Tony called it “bear country” … but there was no scat (unlike the previous ride).

We stopped at Oliphant lake. 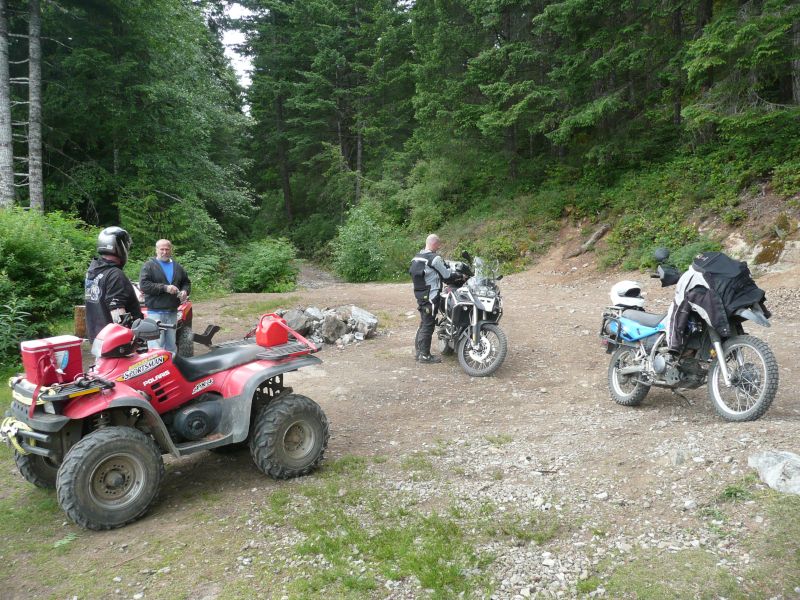 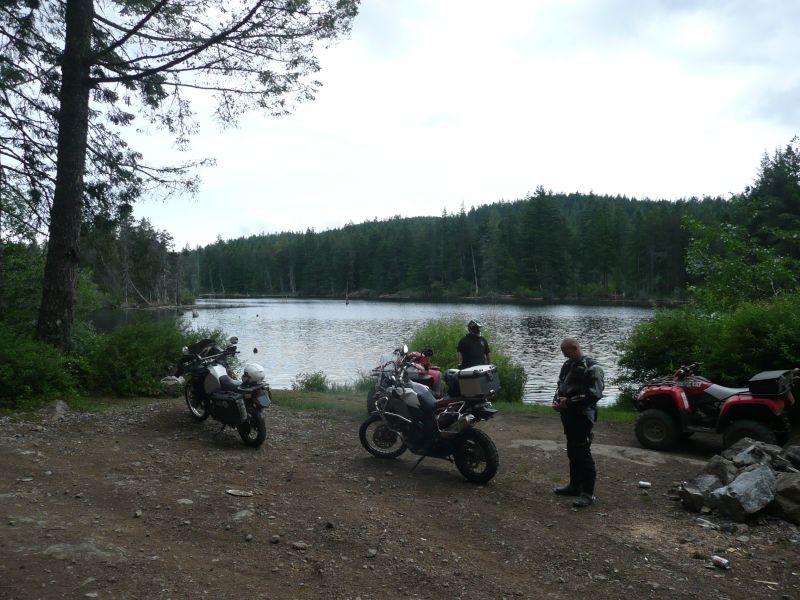 I’d been hearing some strange noises, so poked around and discovered that one of the welds on my front crash guard had given way (bottom front right). No way to fix that on the road (did fix it at home later the same day). I did drop the bike twice on that side… both downhill front wheel skids with the road dropping off to the left, so the bike falling on its right (very low speeds).

The right up the W side of oliphant was a challenging as I remember. Tony paused for a fist bump at one point after the “crux” … which about 30m of climb with some obstacles. This section, was probably the hardest of the whole ride. The powerlines at the end were technical (and fun, but do-able at any speed), the climb at the start wasn’t very hard.

Once past where the East and West roads around Oliphant Lake merged, we were back on good logging roads, and the ride was pretty easy down to the power lines. The ride up the power-lines was fun… the best lines seemed to go from one shoulder to the other and back, with some puddles and climbs thrown in. I’d forgotten how fun that section is.

Then, when the main path left the power lines to the left (down) we descended… but missed the “last” turn off, and had to backtrack a km or so… at which point we came out onto the malahat where I’ve exited before.