This was a solo ride, and basically came out great. If you’re following in my footsteps, this is NOT a beginner ride. There is nothing very difficult in it, but it is more difficult than “graded mainline”.

Lets go through the ride in order. I took the long way out, that was probably a bad idea as it was fairly late by the time I got there. I got to the Otter Pt Rd gas station around 11:30am. I rode out Otter Pt Rd and checked the Butler gate. There was a pair of dirt bikers getting ready to head out. The gate was locked, but they were just going to take their bikes under it… can’t remember if that was drag them straight under, or go under the counter-weight.

From there up to Muir/Blueberry flats, and in via the normal “single track”, and through to the ditch. Spent some time digging the ditch obstacle to simplify it. It still is is NOT easy… but it is no longer difficult… you can go straight up and stop at the top, turn to the right and continue… just gotta have enough speed to get up it. Click the picture to go into the gallery, the next couple shots in the gallery are other views.

After trying it out, I got a bit of shock. They have graded Muir Main. The result is something of a mess for a motorbike (slippery). I checked out that sandy trail that goes N from the W end of the powerline track… not a chance on a big bike. I watched some dirt bikes go up it… not easy for them. It is deeply rutted and the loose sand doesn’t help. It is only about 100 feet that is impassible. I looked at it from both sides :)

I played in some single track just N of there. Even with only one rear pannier on, I still end up slamming it into the occassional tree and getting bounced off the track :(  The first trail was good, both more open and steeper than the “non-trivial” single track around the ditch… The second one I doubled back on… but probably could have gone through. Running on some fairly open road, the bike died on me after a bump… it just totally shut down and glided to a stop. Pushed it to the nearby mainline that was only a few feet away, but UPhill :( The gauges were dead, no lights, and definitely no starter. Remembering what I could of wiring diagram, “main fuse” came to mind in a hurry. Yup. Fortunately the bike comes with a spare… but I turned off my custom LED wiring before plugging in the new fuse. Not sure that is where the problem is, but it seems most likely and I only had the one spare fuse.

So that left me with a quandary. Ride back to Sooke and find some more fuses, or continue the ride and risk blowing the last fuse miles away from the main road? No easy answer, so I procrastinated. Since the tools were out, I adjusted the chain tension.

… and a couple guys came along on big two strokes, and after a minute asked if I had a pump. Yes, I carry a bicycle pump. So they borrowed the pump, heard my sad tale, and rode back to their truck and grabbed a spare (40A!) fuse :) Yeah, day saved! Procrastination rocks! :)

I actually followed those guys up the fork of Muir Main to the Kirby Creek area, they went left (correct direction it turned out), and I went right to finish my exploration of that area.

That area (to the North West [outside the loop]) was majorly muddy. It was fun for me, but I’ve got very dirt oriented tires (for DOT tires). There was active road construction going on. I’m not sure where/how-far that Kirby Main road goes. It looks like it should loop around. I should try to check that from the far side. One of the guys doing the construction work said it was heavy going, and some dirt bikes had been through ahead of me… but I choose to turn around at that point and go check out the spurs. That was good hard riding. Lots of small trees to go over. Lots of mud. Lots of ruts. That chunk of road probably rates a “medium” difficulty for big bikes. Without traffic to smooth it down, even drying out won’t help much because the ruts will get even harder… but Kirby Main does seem to get traffic, so it could be fine/easy.

That said, there was a creek crossing that I’d have loved to have done if I had company. I figure it might have REQUIRED using the RESCUE SYSTEM (e.g. ropes and pulleys). I will have to try to find access to the same crossing from the other side. Access to it was from just above the area that had been clear-cut. That road was in a strange mix of maintained and abandoned.

After that I backtracked to where the dirt bikers had gone and started looking for that loop to the west. There was a lot of neat road. No graded mainline down that way, at least not until I was getting close to Tieulie Place where I ended up exiting.

For example, you don’t generally have trees down on mainlines: 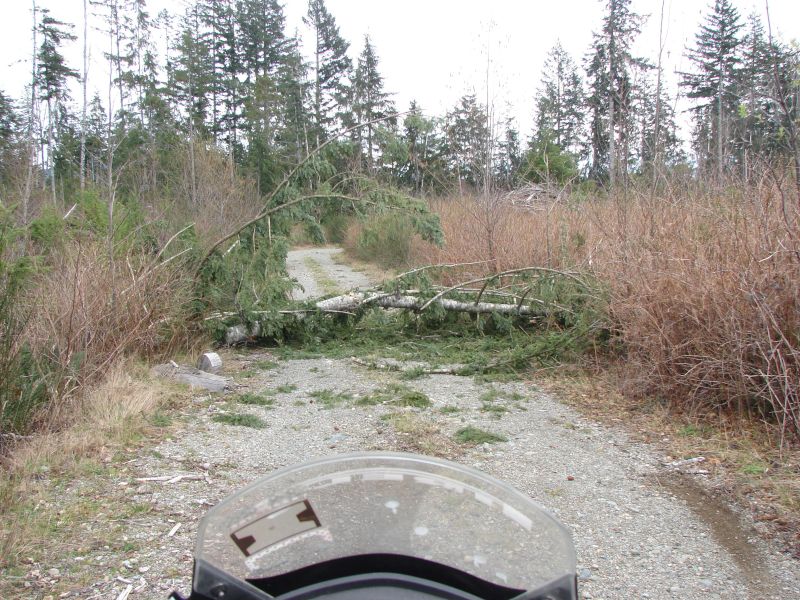 The GPS suggested there were two nice roads on the far side, so I grabbed the hatchet and did the job: 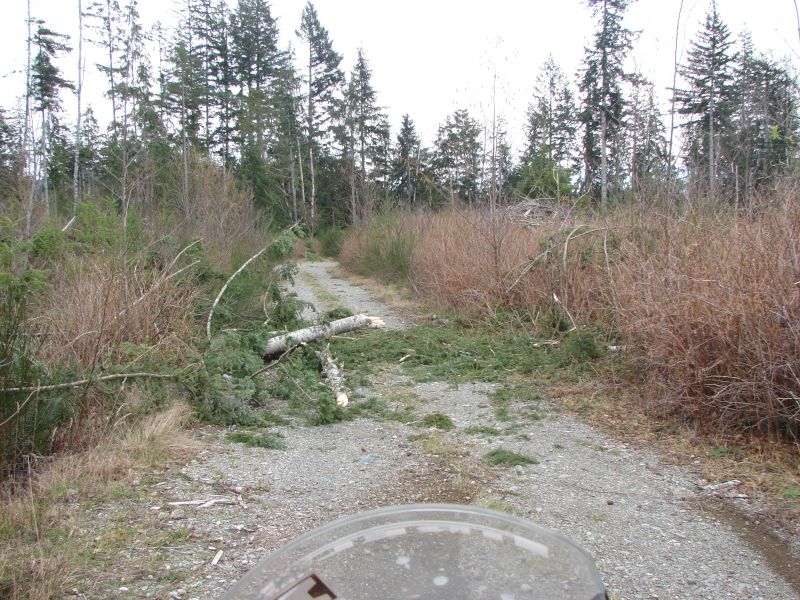 Which means that in the “hatchet or saw?” question, I’m now a hatchet man. Ten minutes between pictures, and that included clearing the area so I could work, and putting the tools away and getting geared back up.That big crack helped immensely :)

I have a fair amount of video I shot, some of it from the road behind this tree. It turned out that neither road went anywhere useful, but they fell into that “nice OLD road” category.

A ran into one more group of riders, a guy/gal pair. They’d broken a chain tensioner on the gal’s bike. Talked for a bit, a nice couple. After mentioning the broken tensioner on my Daughter’s bike, the guy realized we could probably do the same thing and reverse it, so the stump that was left pushed against the “end” of the swing arm. As far as I know, it got them back to the Muir Main entrance area. They said that was where they had parked, and there were NO cars/trucks there when I drove by (after having stopped for a snack).

From there I continued W, trying to find an exit / return to the pavement. I ended up at the gate leading to/from Tieulie Place.

After a bit of thought, the bike teleported itself to the other side: 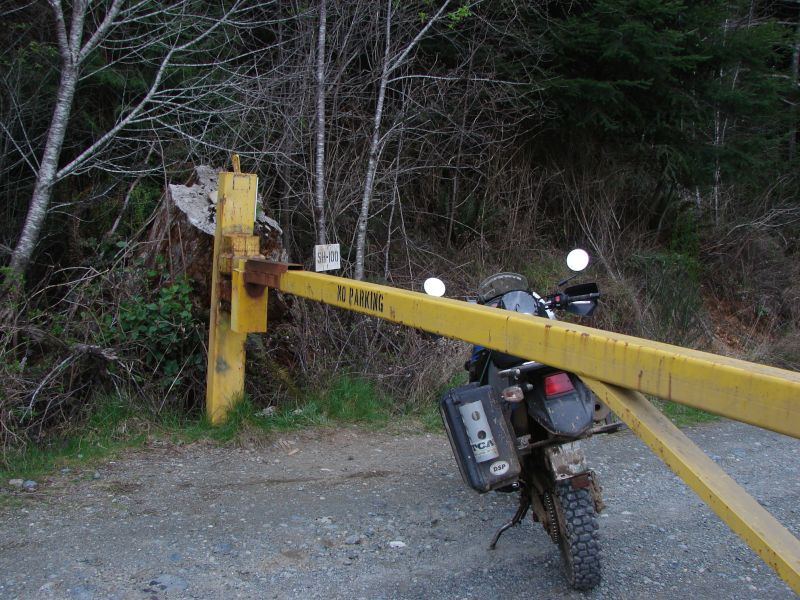 This gate is quite high, getting a bike under it would be fairly simple… and for an exit, the slope is in your favour. It is possible that there is another entrance/gate across from “Shirley delicious”. At some point I need to re-ride the highway looking for entrances.

From here I basically rode straight home. Stopped at the “interesting” store that is just past this gate, and then took a little detour near another gate. Stopped at McD’s for a quick coffee. Drove over some old guy’s lawn to wash my/his bike off, and that was the day!

I’ll see what I can do with the video. It looks promising :)