So, the Nanaimo Lakes “second lake gate” is apparently open for hunting season (9-5 on weekends, or something like that). That’s an old “classic dual-sport” route, so I jumped at the chance to ride it.

The trip was the normal sequence of encounters and mishaps. It got off to a bad start when I finally managed to identify a problem affecting e-mail service the evening before I left. Between writing code (to identify and kill unused connections) and procrastinating packing, it was past 3AM before I got to bed.

Since I hadn’t actually finished packing, it was close to 11AM before I finally left the house. 10 minutes later I was standing beside the bike with my “WTF?” expression on. The bike behaved like it had run out of gas, but the petcock was in the normal position. I was still in town, but it was a good few blocks to any gas station. I ended up putting stove fuel (white gas) in the tank and riding it to a gas station. Sure enough, the tank took 9.7 liters (into a 10 liter tank). So much for my 2.5L reserve.

I grabbed the wrong “small black camera”, so all my stills are off the cell phone. See the gallery for more shots… Including some panoramas.

I got down to the Nitinat River main, and ran a bit on that, but didn’t find any gates (open or shut). I may have run further if I hadn’t been worrying about fuel. (One of the many things I didn’t do was switch back to the bigger 15L tank.) There did appear to be tracks from heavy equipment down on Nitinat River road, but I didn’t see the plentiful tracks of active use, so the road appears to be getting maintenance?

So I ran back up over the pass and the end of Nanaimo River main, and back-tracked to Texas’s track South down K-Branch. This was all in good shape until it came to a missing bridge.

Texas called it a washout. To me it looked like a decommissioned bridge. The bypass was not completely trivial. I had a bit of trouble getting bike up the other side and over the roots to get back to the road on the far side. I should have GoPro footage of this. Looking at the satellite imagery, this was the end of the road. There is good gravel road to the crossing, and just a dirt track beyond.

Somewhere in here I ran into a group of 5, 2 on bikes and 3 quads. They had stashed a gas can here and were topping up. They gave me a couple liters, which opened up some options (go around the N end of Lake cowichan and down the SW side?). They also advised me there was a nasty “puddle” ahead. “Two feet deep with floating bits in it”, and suggested I was best to go by on the right side. 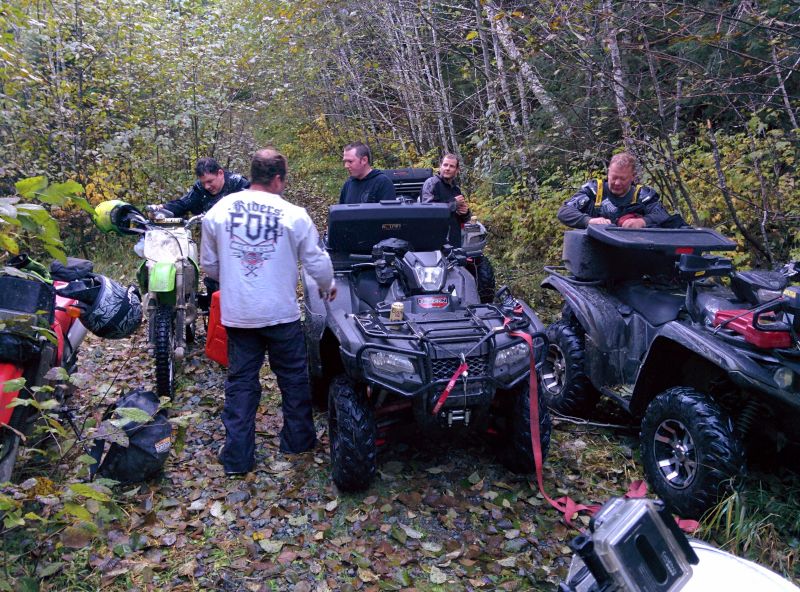 Well, that is what Texas had marked as Gillespie washout (I think). Their suggestion might have helped if I was coming the other direction. There was a nasty “step up” on slippery logs in my direction… so I dragged a log into place to keep the wheels in aproximate position. By the time I was pushing the bike through, a bunch of 4x4ers showed up and one gave me a hand getting the bike over my bridge. Immediately after that they waded into the puddle to remove the floating chunks of wood. They were wearing normal gumboots, it couldn’t have been more than 8 or 10 inches deep. Just riding through would have been way simpler.

That was the last of the challenges. There was a creek crossing or two, but nothing difficult.

Somewhere along here (currently Gillespie connector, or Mead Creek Rd in OSM), I got some nice shots of the bike sitting on the road with sun shining through the autumn leaves.

Shaw creek showed up just down the way, and that was pretty. If I hadn’t needed cell service, I probably would have stopped and camped there.

As it was, I continued down to North Shore Main, and SE toward Youbou. I was exploring a little, looking for access to the hillsides, but everything was gated. I also stopped in at the Maple Grove rec site (closed). It may have been closed but there was another occupant. I should have video of this, it was a bull elk that had tangled his antlers in something… old canvas fire hose or something?

My original plan had been to camp up on one of the hills that funnel the lake into it’s long and narrow shape, but I didn’t actually have a place/route planned out. Somewhere coming down North Shore I realized that Hill 60 should have “just fine” cell service, as it is quite close to the town of Lake Cowichan.

I had also noted another access up to the Hill 60 ridge just outside of the town. This seems to be labeled Cowichan Main, and the views from it are spectacular, it is also a good ride, being narrower and steeper than most mainlines. I passed over a number of possible sites, and ended up settling on something close to the top of the hill, where the sun would show up not long after sunrise. 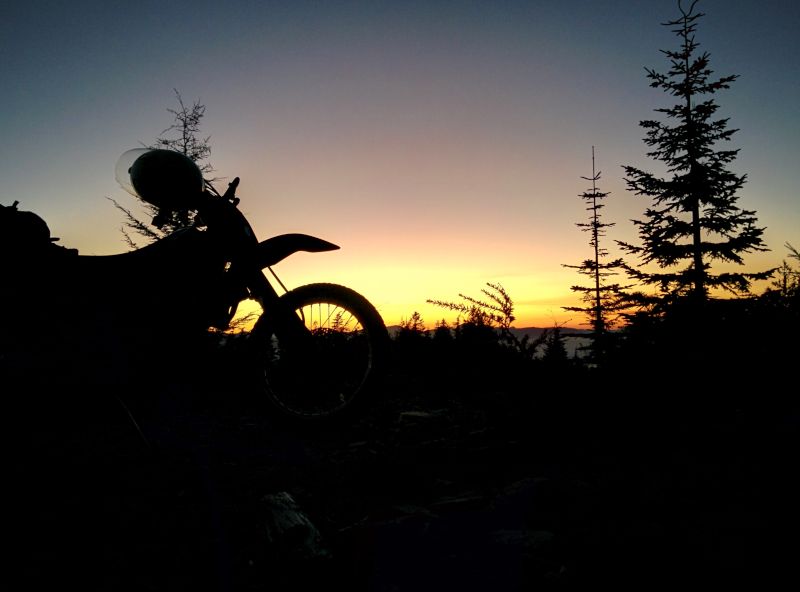 The evening was not warm, but I had chosen an old clear-cut on purpose … there was lots of firewood, so I had a fairly big fire. Not sure if I was sick, or just over-tired, but I declined to cook dinner. I finished off the crackers and cheese I had brought for lunch, and ate the next days lunch too. I managed to stay up to about 10:30, and while I had a couple wake-ups and it was cold enough that I slept with my head inside the (light) sleeping bag, I was asleep when the 8 AM alarm went off.

The morning only felt cold when the wind came by, and that was only a few light gusts. I hadn’t brought any coffee, so there was no real reason to unpack the stove. Stoked up the fire again, ate some granola, and took a few pix and packed up. 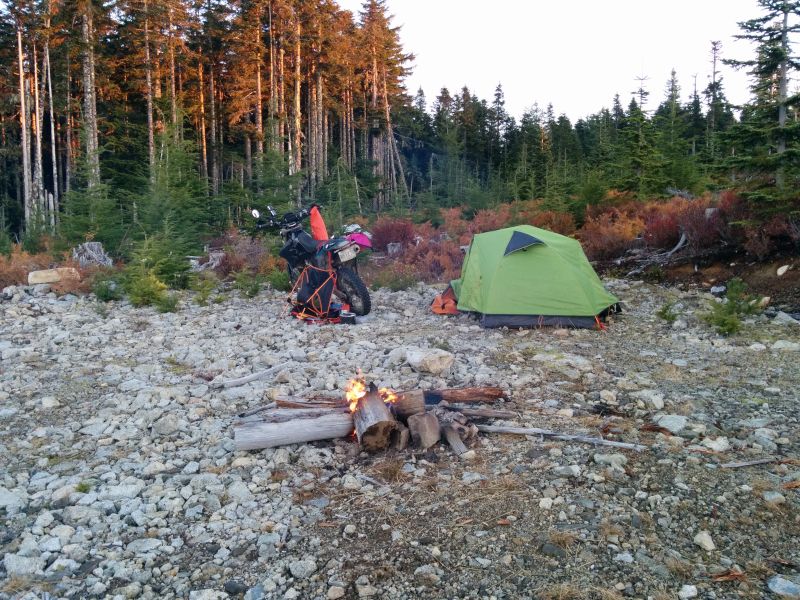 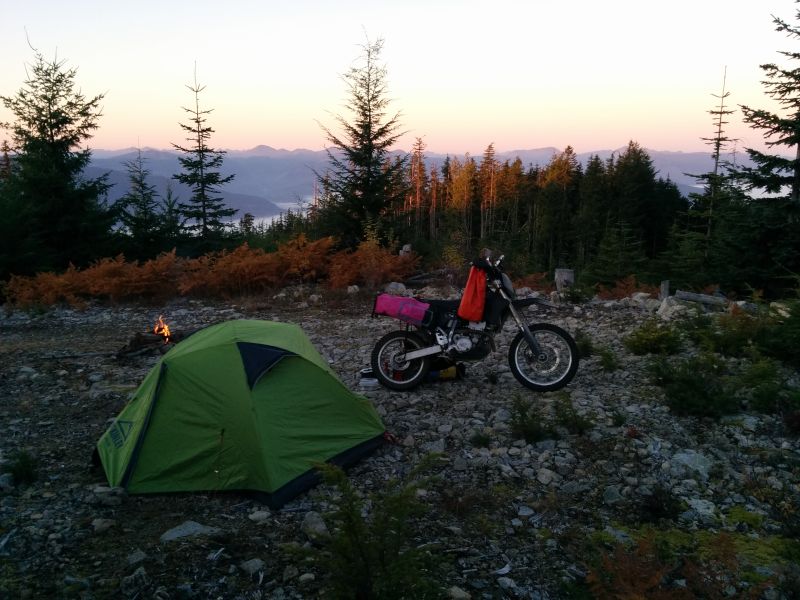 Continuing up Cowichan main was the plan, as the GPS showed it connecting to Hill 60 FSR. What I didn’t see (or it didn’t say) was that the connection is pretty rough. It starts out fine, as a quad track over the fairly flat crest of the hill, but the far side is a washed out old logging road, which T’s into a main road.

At the foot of the washed out track was a parked 4-runner. It seemed a strange place to have parked, as the road continued. Turns out it was a hunter who had parked back a little bit from a clear cut. I passed him on my way up the track, as I was hoping to explore a route to a clear-cut I had seen from Cowichan main, and which seemed to have a good view to the south, and might have made a good campsite.  Long story short, the hunter waved me to a stop when I was heading back and went up one side of me and down the other. Called me “one of those guys that give bikers a bad name”. What a f*cking ass. My only offense was that I was on the same track he wanted to hunt. Clearly he somehow escaped kindergarten without learning how to share. He was convinced I should have stopped when I first passed him and begged info from him about the track. I was out to explore, and following tracks that aren’t on the GPS (so I can add them to OSM) is core to that. If I learned anything, it was that stopping to talk to him on the second pass was an error. Still riled up over that :(

I traced out a fair amount of new track, including one chunk that I am fairly sure was an old railway bed (very flat). The two routes off of that ended with me turning around as they were quad tracks getting rough enough and/or steep enough I didn’t want to follow them anymore.

Some more exploring of new spurs ended when I jumped a ditch and the starboard side saddlebag hit the dirt. Looks like the subframe strap chafed through, and once that was gone the bag bounced and ripped out the other straps. I piled that bag on top of the big duffle and limped down the Hill 60 FSR back to the highway. Repacked there to give myself some seat space and headed for home. Did take some side roads as there appeared to be an accident or other hold-up just south of Duncan.