Skip to content
What the title said. Scouted a little more of the trail to the W of Kirby Main, that is fairly difficult road in many cases. Certainly do-able on a big bike, but challenging. Some fine views too.

I tried to get to the back side of that creek that I was considering suggesting for a rope-crossing. That was a nice ride until about the last 1 km, at which point it got tough enough I put the gopro on. And at about 250m out I turned around (didn’t know how close I was, but I was on a timeline, and to be honest, I had just spooked a small black bear, I was a little worried there might be a momma around.)

After that it was back to Muir Main and head North to meet Joel. That took a _lot_ longer than I expected, and I was pushing pretty hard at the end… but got to the dam with a couple of minutes to spare. Joel was a bit later, but I had questioned his timing the minute I saw it, so was not surprised.

After a couple minutes on the dam we headed up to Butler, then the road that continues south where West Jordan stops and becomes Butler. We checked out some lower paths that the backroads data shows going through and connecting. You can see it in satellite, but when you get there, OSM was right, the tracks ended.

At about that point my bike started to misfire horribly at anything much over an idle. It had been skipping a bit since the water crossing coming off the dam. We basically headed out, with me limping along trying to keep below about 10% throttle and 2800 rpm. We stopped where Butler and E Main used to connect to ponder which path would be best, and decided on Butler. At this point Joel volunteered to ride home and get his truck, while I limped the bike out to the main Butler gate. I wasn’t going to refuse the offer of an easy/free ride home. Strangely, as soon as we re-started the bike ran fine, and I kept up with Joel for a couple of km, then the bike went back into limp mode … and the limp got worse, until the bike wouldn’t even idle reliably and the starter wouldn’t turn. I am inclined to think/guess the charging system cut-out, and the spark got weaker as the battery voltage went down. There have been times before when the starter seemed weak. I don’t know if there’s just some dirt on the brushes, as often just trying again works, and so can pushing the motor by pushing the bike in gear (so it’s in a different position) and trying again.  Will figure it out.

There was also a point where there were some nasty noises that seemed to be coming out of the transmission… almost like one of the dog-clutches couldn’t decide where it wanted to be, and would try to engage and then get kicked out/back with a loud thunk.

Anyhow, I ended up pushing / coasting the bike back from about the 8km marker. Fortunately Butler Main is mostly downhill going back to the gate. Joel arrived about an hour later, and since he apparently trucks his bike around a bit, he had the ramps and tie-downs all worked out already. Much thanks!

There are pix to come, and probably more info about the bike.

This shot was taken from a little below a peak marked as “The Matterhorn” on OSM. It has quite a S facing face, not quite Squamish’s Chief, but there is a simularity. Anyhow, put this in the “find the bike” category where the bike adds scale.

Yes, BC Hydro does come out here and do work, they’ve clearly recently replaced the poles of this “tower”. 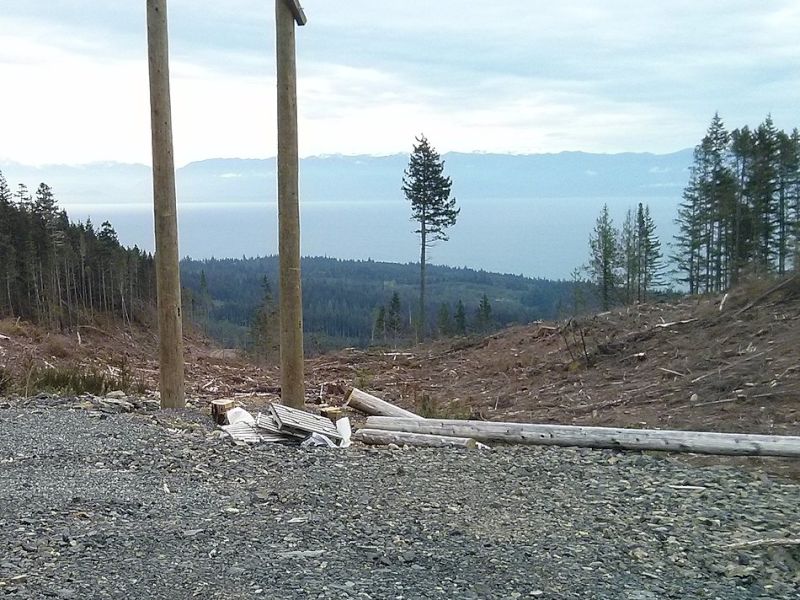 Here’s a shot that covers the first “difficult bit” if you’re headed W on this track. Some of the crushed rocks in the road to the left are pretty big. Easy if you get and hit the right line. The back side of this hill is fairly steep too… not “can’t stop” steep, but getting close. Turn left and go where the bike points, the short spur to the right is _very_ steep. You don’t expect to dig holes in a crushed rock road, but I found more than my own when I took the KLR up there :) 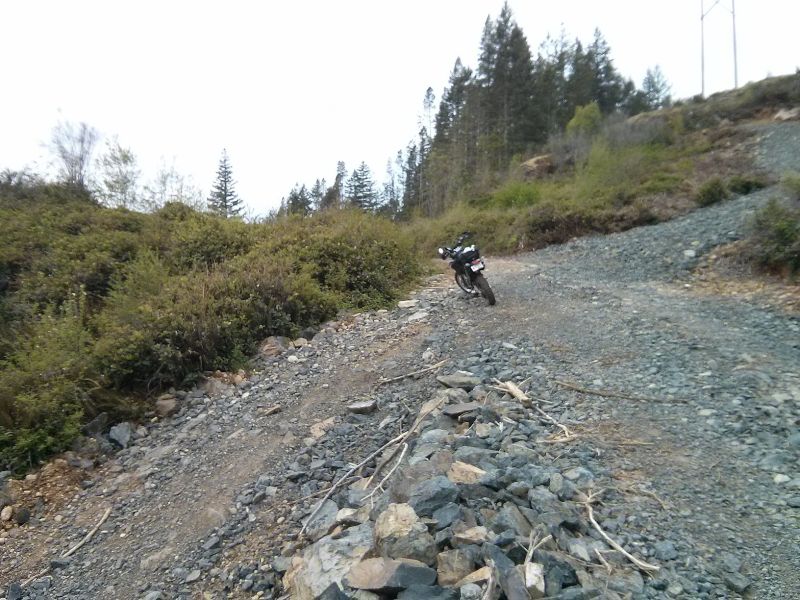 And getting closer to Kirby Main, I chased up an old unused spur that was a nice challengine ride until it got decomissioned… at which point it would have gotten “not fun” on a big bike. 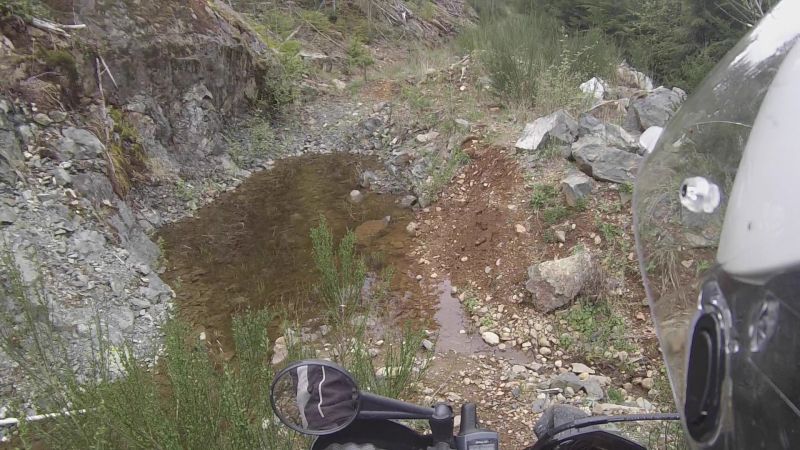 And yes, I did catch up with Joel, or at least the bikes got to talk: 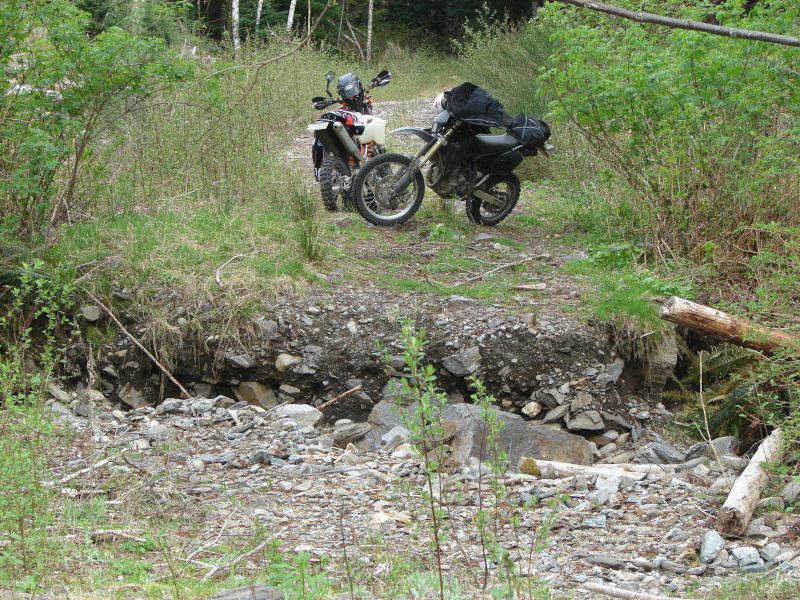 We walked across that washout and found that while the road did continue past the clear cut, it was covered in blow-downs. And this is where we tried to get my bike running properly, couldn’t, and then proceeded to limp homeward.