Skipped out for a couple hours, needed the break. Rode through the N end of the Mt Wood area looking for big bike access points.


If you’re looking at the GPX trace, I started off of Frayne / Benko Rd in the NE.

That was not a great entrance point. I didn’t scout all the options, but what I did ride was fairly difficult single track on the KLR. Not horribly steep, but twisty. I did drop the bike at one point, and forgot to get my foot out of the way. First time I’ve ever been anything bordering on “stuck” under a bike. Nice scrape mark on the shin too. Just normal stupidity. Had to stop because I was going wide on the very tight corner. For some reason I couldn’t reach the ground, so had to lay the bike over slowly… and I guess slowly was the problem, as I kept my foot down to lower the bike instead of getting it out of the way.

Anyhow, the next place with normal pavement was Gatewheel Rd. That’s a totally trivial entrance, except it is clearly marked as private property, no motorized vehicles, and there are lots of houses right next to the end of the trail, no stealth entrances there… (Probably not a bad exit if you get stuck looking for an easy way out.) 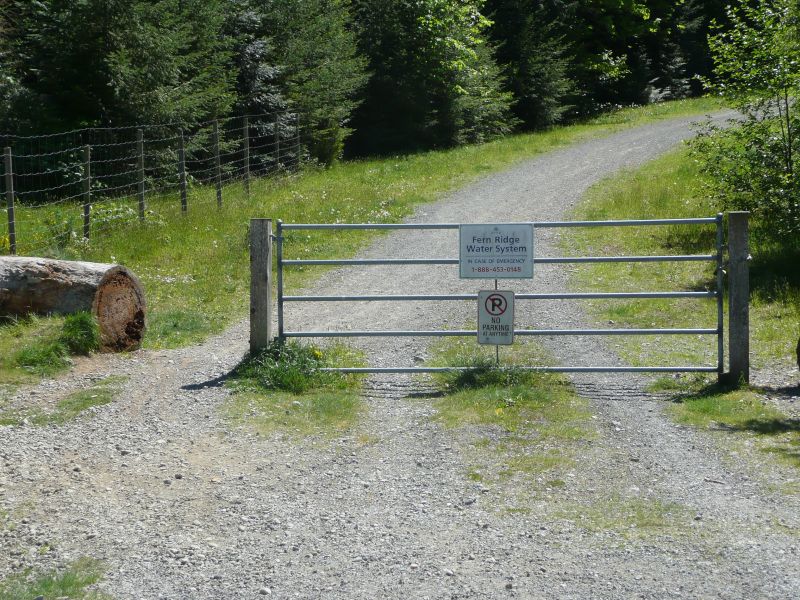 The entrance that looked like a better compromise, was the end of Fern Ridge Drive. There’s a gate with a fairly big gap by it that leads up to a water tower, and a trail past the tower that leads up into the back roads. The gotcha is the start of the trail is steep, and currently overhung by cedar branches. And there are some big roots in the center of the path. IF you can carry a little speed up the hill and tolerate getting whacked in the head by a branch or two, it is NOT a difficult entrance. (That might change if it is wet, you’re going UP a dirt trail.) If I go through there again I might clear the branches with a hatchet.

From there, my path (which was pretty much “stay right”) took me to the north slope of Mt Baldy. There were some nice views, some nice roads, and some hard roads, but it was a one way trip and I had to backtrack a couple km.

For some reason, there’s a jump in the GPS trace, either I deleted some data, or it just stopped logging for about 12 minutes. Anyhow, after backtracking to the east, and proceeding on the NW side of Mt Wood I stopped for a break, and some pictures of “Old Baldy Mountain”. It was fairly warm, and at around this point I realized I wasn’t feeling particularly high energy, so the trip from here was mostly looking for a way out. Looking at the GPS (and even now, in OSM) I couldn’t see a path to the south that didn’t run by Oliphant Lake… which wasn’t great as I new the road to the W side of the lake was pretty rough. Turns out it isn’t too bad going south, yes, I cleaned off the skid plate in more than a few places, but that was wood, not rock… and the KLR’s clearance is not very high. Still, that is a rough bit of road, not beginner or even novice friendly on a moderately sized bike… but not difficult (going N) on the DRZ.

Anyhow, S of the lake I thought I could get out on Aikman Rd. I’d been there before and looked at it, but I must have missed some of the barriers, because I did not see a way out this time. So back up into the bush and head south. I’d been over this ground before on the DRZ, and did not want to take the KLR out the way I had come in on the DRZ… so I tried a path to the West … and while it got me down off the mountain, it dumped me on the railway track… so I ended up doubling back on the track to the first trail crossing the track, at which point I was down on the “easy gate” on Shawningan Lake road (just North of the  Skylark/Wright subdivision). I will have to try going up from there and see if I can get my bearings. I should have been able to make the connection, but I was trying to go S and W and it looks like I needed to nearly due N.