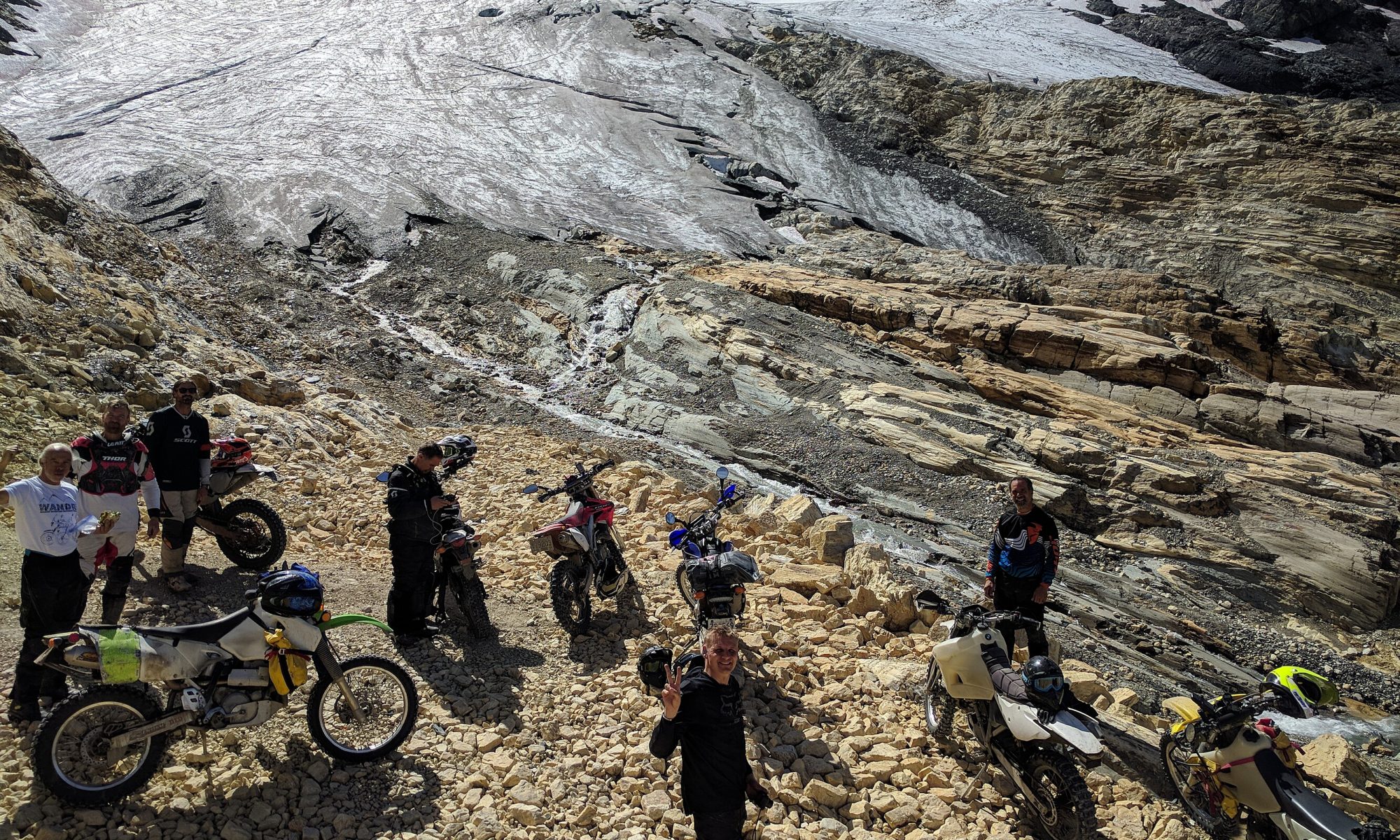 The 2020 big trip. 10 days and 9 nights in a tent (plus the overnight bus trip back). Eventful. Clipped a car, lost a “gopro”, and the “bush mechanic” replaced a wheel bearing, front pads, and both tires. Great event.

Thursday: left home around 5:40, passed Jammers at 6, and into the ferry lineup around 6:30. Jammer caught up at the ferry, and while greater vancouve sucked, we had a good ride up Harrison East to Boston Bar, and another good ride through to Chris’s parents place in Merrit (arrived around 5:30). (The plan was to spend the next two days riding from here.)

Friday: For lack of a better summary, this was Jammer’s triumph. Chris had some ideas for a loop, and wasn’t sure if it would work. He had some online references suggesting we might be able to get from Silver lake to Cabin lake via a “mini whipsaw” like track. We did, and while the reference isn’t wrong, you can’t really say that the 25+ km of whipsaw is like a 250m ATV track …( except that it works). It was Jammer’s triumph because we chose to go on a hike … to a summit. We could have gone to visit the Conair crash site, but we thought the summit would be closer (it might have been). Anyhow, we bit off more than some of us might have chosen to chew. James grabbed it and basically ran with it. I was 2nd to the summit, but he must have had 20 minutes on me, and the rest of the crew where 10 or 15 minutes farther back. As I recall, the rest of the loop back to Merrit was FSR and not very memorable… but cabin lake and the hike ROCKED. (I got separated from the group coming down from the summit, and appear to have lost the gopro in my resulting “huff”.)

Saturday: We went and played on some wonderful trails maintained by a Merrit mountain bike club. Got to ride a see-saw, etc. We also ran through some not well mapped areas (backroads map books, not OSM) to make a loop of this. Which included me clipping a car about 150 meters before we got back on pavement (just sheer bad luck, wrong place at the wrong time, while in a tight staggered line of bikes).

Sunday: Time to move on. The rest of the group was going back to Victoria. I had a friend/business client in Vernon I wanted to meet. He had time on Monday, so that gave us a spare day to run (SW and then NE) down the KVR towards the Coquihala summit and then over to the Whipsaw trail, and through Princeton (food) and then NE toward Vernon. If you haven’t run the Whipsaw trail with a competent friend on dual sports … DO IT. It’s 25+ km of semi technical riding with a few harder bits. Counter clockwise (as we did) is probably simpler, as it means you’re going down the worst hill. Sunday ended with us at the Link Lake Rec site where we shared a campsite with a Mike who had already paid for the site and bought firewood :)

Monday: I’d made a note Sunday night to check the wheels and a few other things before starting Monday. Sure enough, I had another bad front wheel bearing. Since this was a problem I had last year, I did bring spare bearings and the bearing removal tool. Somewhere/sometime we had set a time to be in Vernon to meet “Rob”. So the challenge was now to get to Kelowna, find a set of wheel bearings, change them (possibly at my father in law’s), and still get to Vernon in time. Mike left ahead of us, but we passed him (on his R1200) in the gravel heading for Summerland. By the time we had got there I had decided I wanted to pull out the bad bearing instead of waiting to be able to replace both of them. Consequently we pulled into a church parking lot in Summerland that had some shade. It turned out to be an idylic place for a quick wrenching job. We made it to Rob’s place with a few minutes to spare, and spent the next few hours yakking. We left there in a bit of a hurry, hoping to find a campsite before dark. As such we ended up on the first obvious fork to the lake and a fairly nice (but hardly unused) campsite by Aberdeen lake.

Tuesday: We follwed the TAC route from Vernon to Greenwood, out through the Phoenix mine site, and down the Greenwood. From there James led through some of the Columbia and Western trail that he knew from his mountain biking days, and up the Rossland Cascade road to Rossland, where we caught up with some of his friends.

Wednesday: Given the late start, this was a short day … Rossland to Sandon (ghost town). We got to do some of the Rail trail on the south side of Columbia River heading east into Castlegar… but we didn’t do enough of it, and missed the tunnels :( We should have gone up BullDog FSR (if not further east) instead of Sheilds Creek. That rail trail is in GOOD shape, not all whoops’ed out like the KVR is. And the run north from Castlegar along Slowcan is a damn nice motorcycle road (and yes, there was NO shortage of bikes, lots of helicopters and small forest fires). The few facilities at Sandon were closed, so we made plans to find a campsite, and come back at 10am. Instead of heading up to the Idaho Peak rec site, we continued up the river (Carpenter Creek) and found a great little site just 500 meters or so up the road.

Thursday: Given that we were supposed to go back down the road to Sandon, and we were up and ready to move well before 10am, we opted to see what was up the road. Well that was some interesting adventuring, and after a few (dozen) switchbacks we were way up on a ridge, and James had recognized some “serious mountain bike” signs. We were up above a well known MTB lodge, and the ATV riders we met said we could continue through instead of looping back. With regrets for having missed Sandon, we continued forward. We needed to make it to Invermere for Friday, and I had realized my front brake pads were shot. I called ahead to Crankbrook and paid for a set of pads there… the only question was whether we could get there before closing (yes … but because they closed at 5:30 and not 5:00 as I though). Between us, we ended up with a 3 new tires and a set of brake pads… definitely a Mad Max image there. Intended campsite near Fort Steele / Wildhorse River was blocked off, but bikes had no trouble going north instead of south.

Friday: after the bush mechanic session (3 tires changed, one set of pads the night before), the big question is WTF do we do with the old tires? The “nice lady” at the RV site said there was a dump site up the highway at Wasa Lake… but James found the Fort Steele one (much closer), as well as some items to take home :) Navigation for this day was a bit mixed up. James had some memories of guiding through the area, so we tried to follow his memories… we found much of it, but none of the warm/hot springs. We did play the cautious game and didn’t extend our route much more than we needed to, so we arrived in Invermere at a reasonable hour… and James was still alert enough to see the School bus in a grocery store parking lot. Success, we made the rendezvous! A short hop from here to the great site Peter and Sue had prepared for us… which was to be our base for the next two days.

Saturday: Day 1 of the WANDR event. We picked up the score sheets and headed north to meet Clay and Derrick in Radium. Clay had run the event before and was the effective leader. This day was about picking off clusters of “waypoints” and racking up a reasonable score. While the riding was “fine”, it wasn’t the jaw dropping riding “in the peaks” that the advertising had lead us to expect. (At least that was my impression, and some of the other riders shared it.) Returned the score sheets shortly before the 5pm cutoff. Talked to Trent (event organizer) about options for more scenic riding and headed and back to Peter’s place.

Sunday: No waypoints today, I handed back a blank scoresheet to let them know we had all gotten out of the “woods” safely. This was “the day”, after one mistaken turn, we found the glacier that Trent had pointed us at. It was harder riding than we had done to that point, and a intra-personal relationship (not mine) got “more interesting” than any of us would have chosen, but that was apparently a chain of events that included more than the day’s riding. Derick didn’t make it up to the glacier, but (in time) everyone else did. Great pix … “worth the trip”. Unfortunately that “chain of events” sort of marred it in my mind. Anyhow, we all got back to Peter’s place, and after some more events, got headed homeward. It was a pretty quick return. I believe we made the first ferry and I was home around 10 am Monday.