Another long day, but an ADVenture. This was a neat ride.

The main plan for the day was to try to go from the Todd Mountain mainline through to Fleet 600. OpenStreetMap (basemap for my GPS) seemed to think it was do-able. And it was. In fact, it was a damn good ride. First chunk off of Todd Main was a bit technical. No worse than Butler <-> Muir. Just a bit intimidating. Then down through some alders and broom, and presto: a wide road, turns out to be an old railway. From there the ascent climbed up into the peaks between Mt Demers and Mt Todd. Some good views across to Mt Demers. Then back down to the base of Fleet 600.

From there it was S down Fleet to Renfrew Rd, a km or so on that to the fork that is signed as an extension of Fleet Main. Up that to the weird three way (all roads lead East), take the middle road and ride that (kinda boring) to the middle of W Jordan. Down that to the bridge, but skip the bridge and keep going S. I wanted to try to get up the hill across Jordan River from Mt Valentine. That didn’t work out. The obvious roads are badly overgrown. Ended up going way out to the NW before running out of time and having to backtrack. Route out was the Butler <-> Muir connection. That was a bit of a surprise. I’d forgotten how steep that is headed west. And coming down, the road is apparently in heavy use and not in good shape.

That’s the quick version, the long story with pictures follows.

Started at Kapoor main, heading east. All the gates were open which was a surprise, the 8.5km gate has been shut the last few trips. Down Kapoor past the 4 way with W Jordan. Had a slight delay at one point to replace a fuse. Figured out later that day the short is in my LED wiring (good, I know that, and there isn’t much of it). Took one of the new spurs to the south that I’ve looked at several times, and isn’t in OSM. That led to the first break/stop.

Back-track to Renfrew Rd, and continue W to Todd Main. Re-ride first spur (E123 and/or T200) off of that as I know the OSM version isn’t complete. Near the top of that is a little spur that looks out over the San Juan River valley. Not sure if it was setup for the view, or just happened that way.

Back down to the Todd Mainline, stopped to check out a view.

Could hear some equipment working nearby. Was working on the bike, trying to get the license plate to stay in place when I realized the equipment was moving and about to go past the pull-out I had stopped in. Wasn’t sure whether to stay or scram. Ended up staying. The guy in the equipment stopped to talk… he actually had his son in the cab with him. Anyhow, he said there wasn’t anyone else working on the mainline, and was curious to know if one could get a pickup through the route I had said I wanted to take. I didn’t know the answer at the time, but the first chunk of the route I followed would be a “no”.

Nothing wrong with the view from here… still looking down and across the San Juan River valley.

The worst road was the next section. 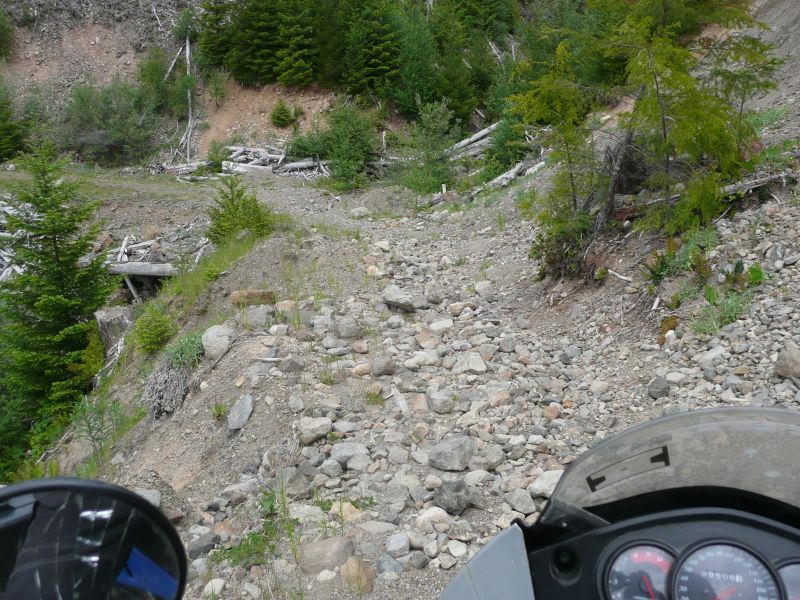 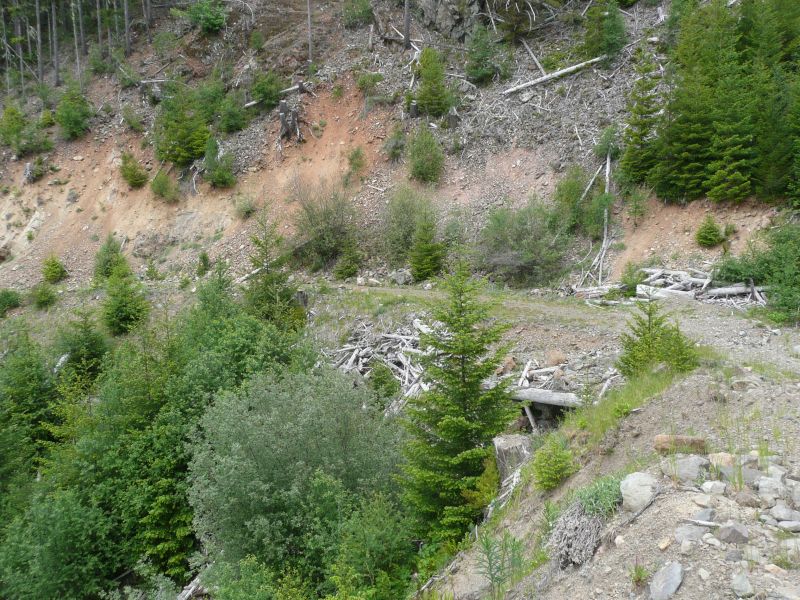 That wasn’t as bad as the first shot makes it look. I rode over it standing. The road gets somewhat overgrown here, and descends a short hill to T into a wider flatter road.

The new road is so flat, I almost immediately guessed “railway” … which was confirmed a short while later: 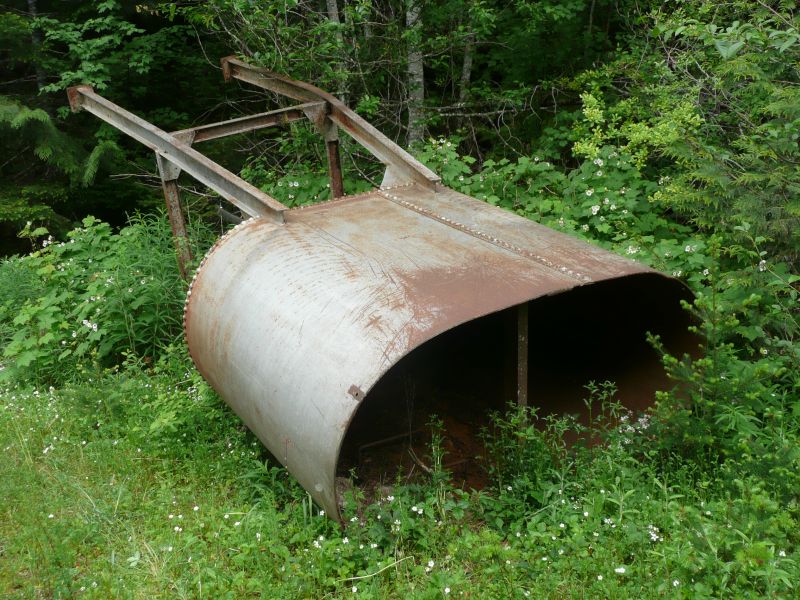 Not much question about what that tank was, or that it implies there was a steam engine running up and down this flat “road”. There’s a bit of a creek behind where the tank was, which would have been the water source for the tank.

Shortly up the road from there was a real creek with an old-style bridge. 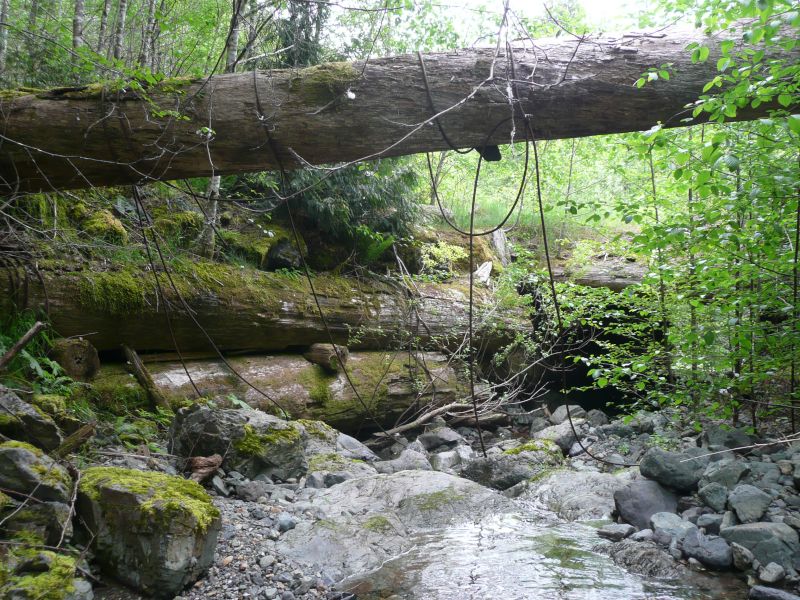 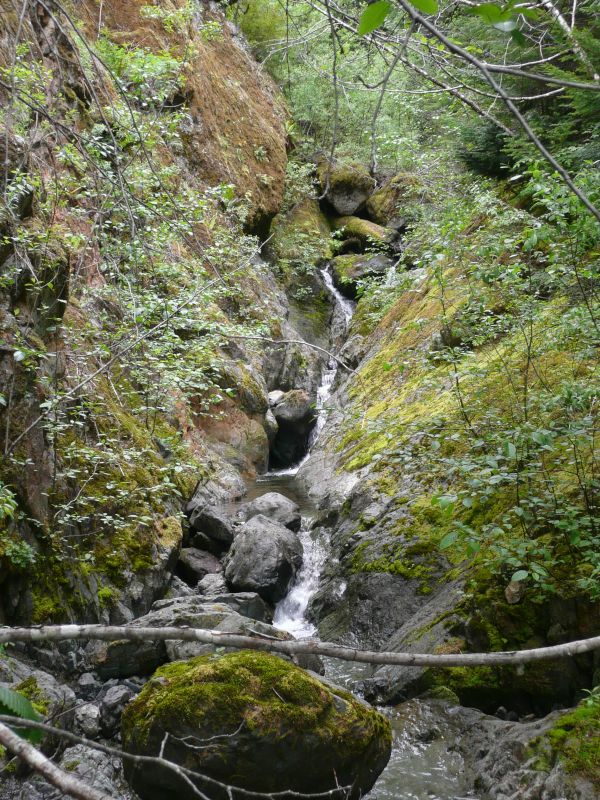 I was poking around the creek when I got distracted by some strange litter. After a good few minutes of digging I pulled it out. When I spotted it, only the bottom cm or so of the handle was above the water. There was some iron rich rock here too, getting down the the creek was difficult because the rock was quite crumbly.

A fork took me off the railway line and onto a more modern logging road with a modern bridge. 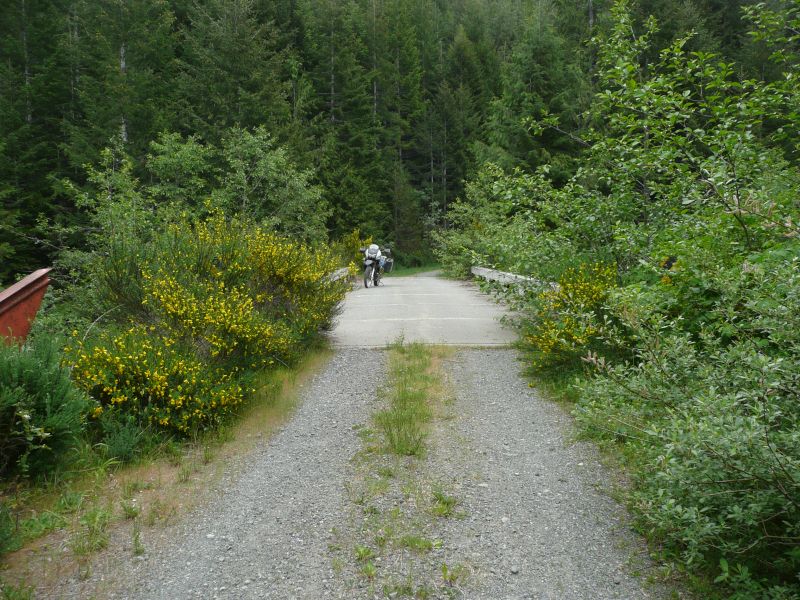 The pics get sparser from here on. There’s some switch backs that ascend from the river (not too steep) and the road gets fairly narrow/unused. Then it suddenly seems to open up and almost immediately gets steep. Other than that rocky section at the start, this steep climb was the hardest part of the ride. I started to fishtail at one point and had to stop, then gently get the bike up (spinning tire) to where the surface was harder… at which point things were fine. Of course, the steep climb means you get a nice view.

I believe the hill in the distant right with the Mohawk is Todd Mountain, which means this view is mostly to the East.

From here, the route got up into the flat area between the “peaks” between Todd Mountain and Mt Demers. So there were lakes and ponds, but not much of a view.

There’s even a fairly big lake up there (compared to the ponds). 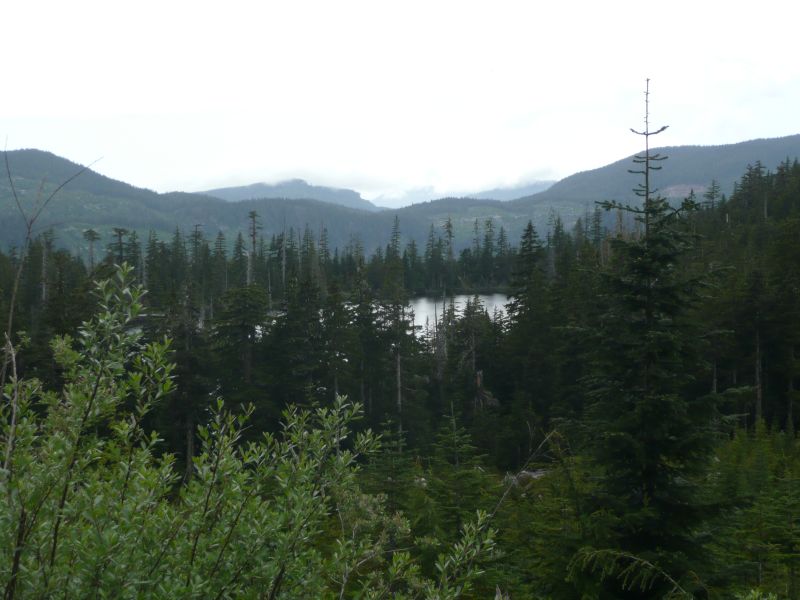 I couldn’t get anywhere near it, as there is a gate at the entrance to the loop that likely have gone by it, but there is a lookout or relay tower in the top of this picture: 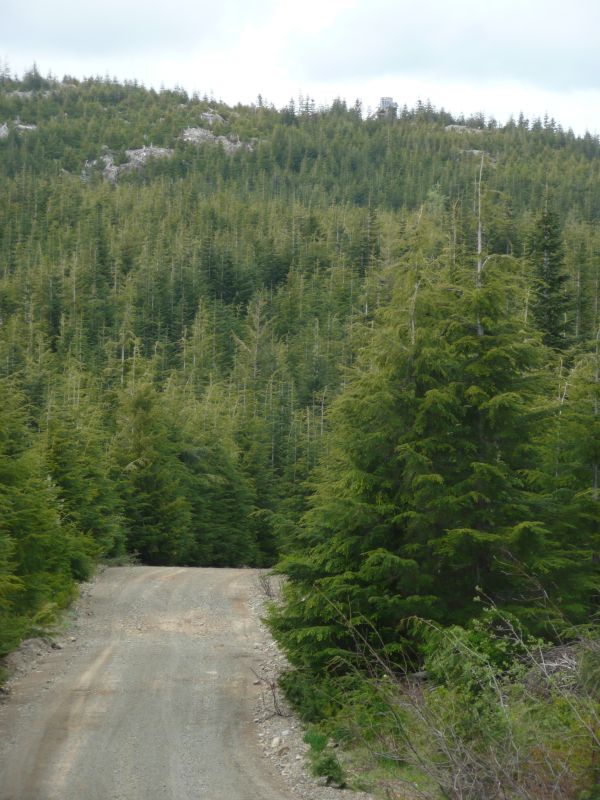 One thing you can often see from up here, is Mt Demers. I would have been up at the top left of the clearing shown in this next pic.

Most of this are has been cut fairly recently, so it’s covered in short trees… 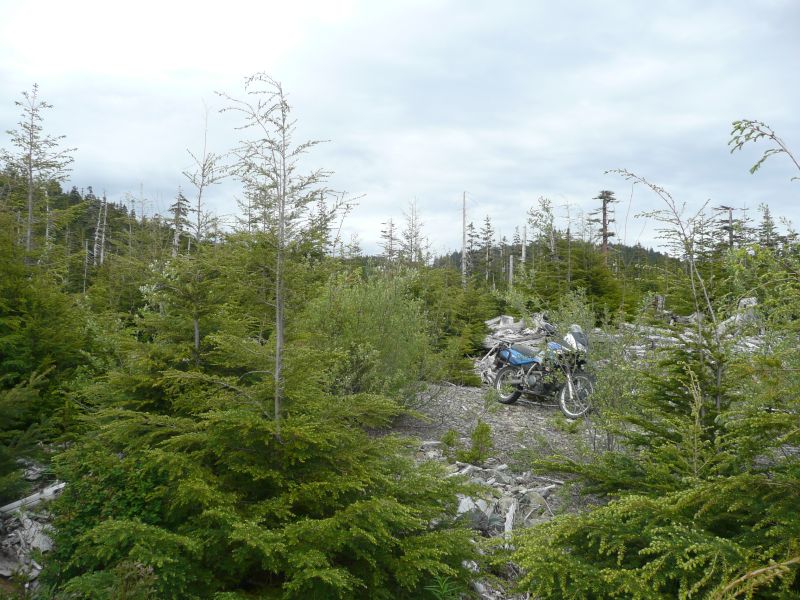 That shot is up a little overgrown spur.

Some of the roads “dead ended” for all practical purposes. No real surprise, no real reason to keep them open. 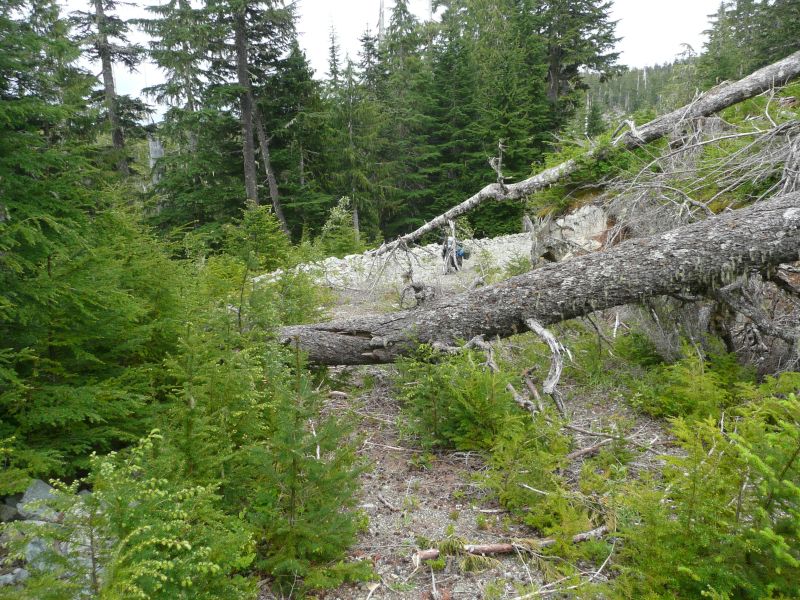 The view from a little bridge shows the flat ground seems pretty wet.

And then it was down the other side to the base of Fleet 600.

The rest of the pix are sporadic. The route up the Fleet “extension” and back down to West Jordan M/L was through fairly heavily forested terrain and nothing to take pictures of. I liked the “extension”, that was a neat chunk of road, and except for some sections where mud has dried into bad ruts, was in very good shape. The road to W Jordan was also in good shape, both are pretty flat… surprisingly so given their length and that one end is at river level.

I did take a second to get off and actually check out Jordan river.

The river bed around here seemed “very clean”… as in the water would really rush through here if there was a flood. Nothing to catch debris and slow the flow down. From the S end of W Jordan M/L I kept going south instead of turning E across the bridge. I wanted to try to get up the hill across Jordan R from Valentine Mountain. I got a little height and an ok view of Diversion Reservoir.

The most obvious route up the hill looked badly overgrown, so I spent a lot of time looking for another route. 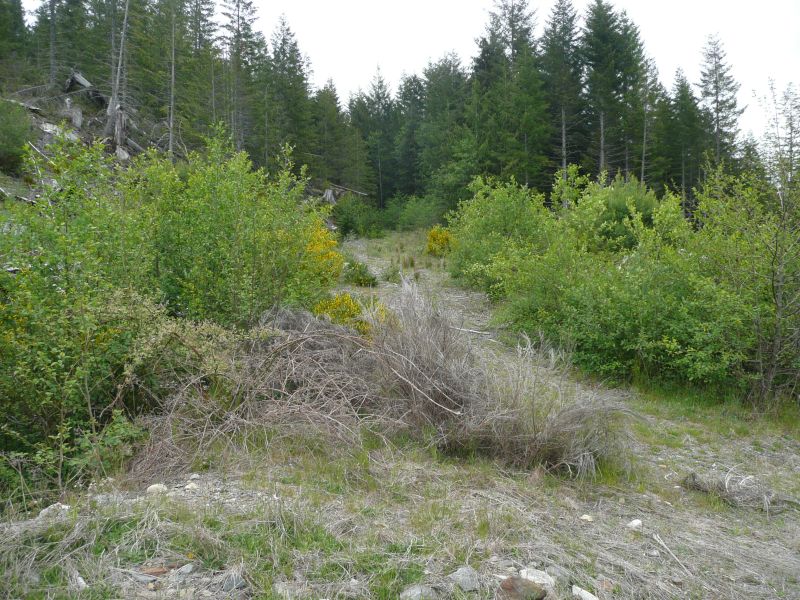 That ended up taking me way up to the NW onto a “Bear M/L” … which was in good shape, much better than the roads required to access it. That had me thinking there was another exit… but if there is, I didn’t have time to find it… it was getting late and I still had a fair chunk of riding to get to slab, and then another hour on pavement to get home.

Had a male blue grouse try to impress me: 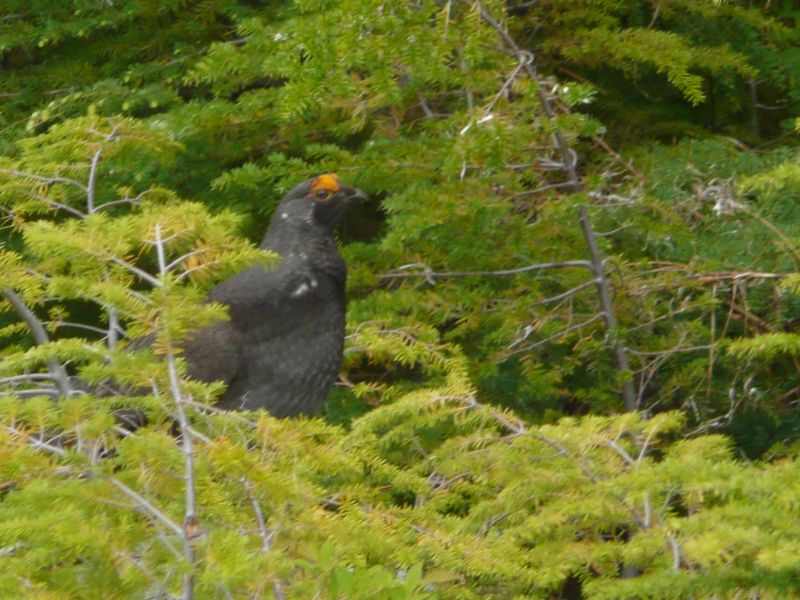 The planned route home was over the Butler <-> Muir connection which I haven’t ridden recently (couple months?). While going down Butler I took a spur up the hillside, as I’ve got pictures of that hillside, but never ridden it. 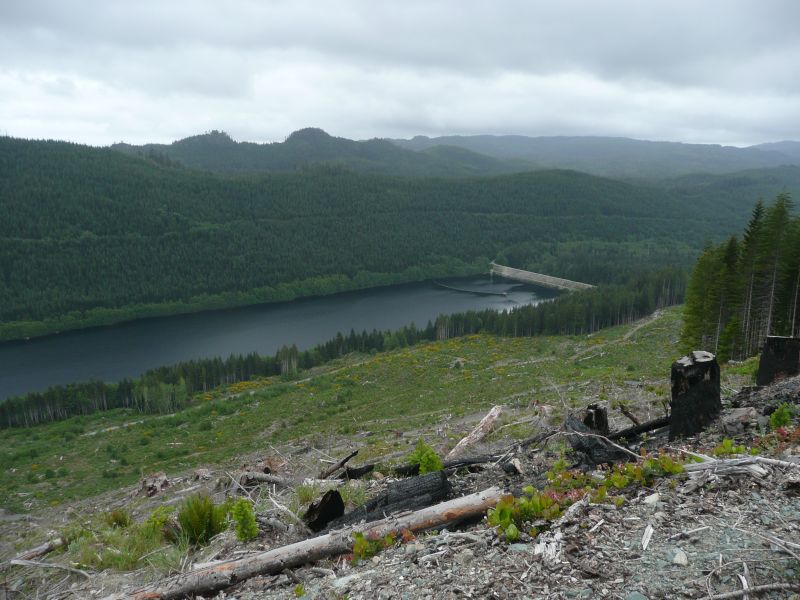 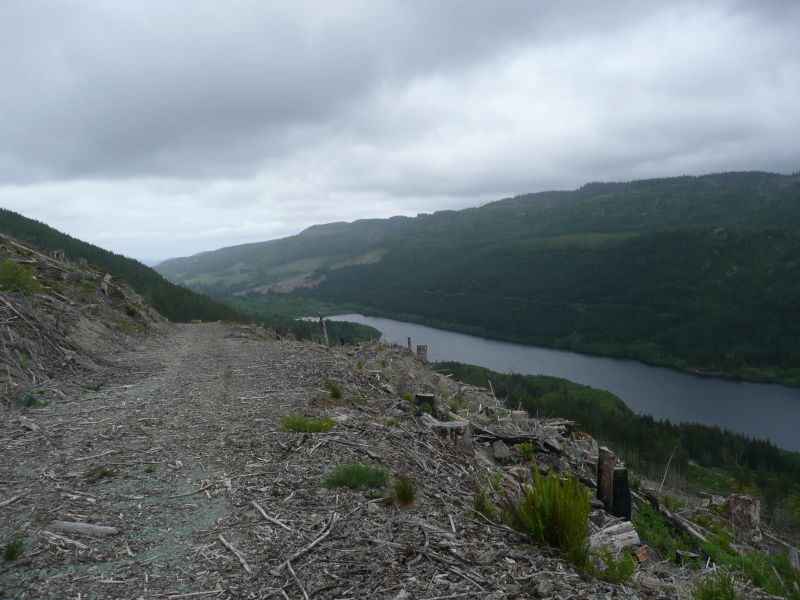 I was trying to see if the GPS knew how to cut the corner to the connector, as some guys running off the backwoods mapbook GPS data seemed to think there was, but my OSM based GPS didn’t have any such shortcut, and led me through the normal route which turns at the “big intersection” on Butler M/L.

I’d forgotten how steep the climb is going W over the Butler <-> Muir connector. One of those straight steep sections that I tend to climb at fairly high speed. Turns out there is some active logging up there, and they are exiting on the Muir side, the road down was pretty chewed up.

I stopped to take a couple pictures of the end of the route the quads were using to get to Tugwell. Still looks darn steep and hard to climb. 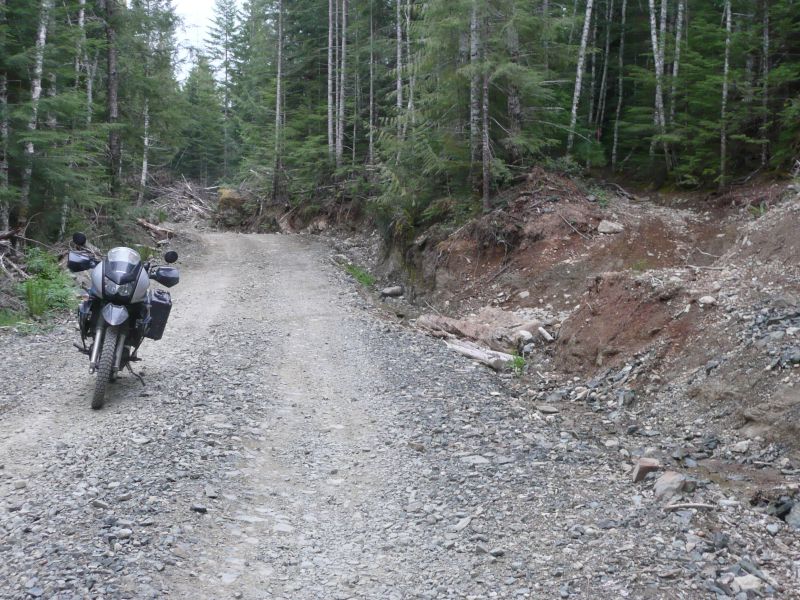 That was pretty much the ride. The first chunk (Todd to Fleet 600) was the fun part.

There was a lot of bear droppings and I did chase a couple small bear off the road. This guy didn’t qualify as small though:

I hope he makes it through the season. He (?) wasn’t very scared of me, and I crossed paths with two trucks that seemed to be hunting. Not sure if they were after bear or not, but it does seem to be bear season.

Looks like the offroad part of the GPS track was 160km. A _long_ ride, and very little of it at high speed.