Have been without a dirt capable bike for almost two weeks. New tire arrived, finally got it mounted, and a day clear enough to ride. Luke wanted to get out too, and wanted to see what I call Tugwell East… so that’s what happened :)

No GPX track, I got the GPS out, put batteries in it, and left it on the end of the bed. 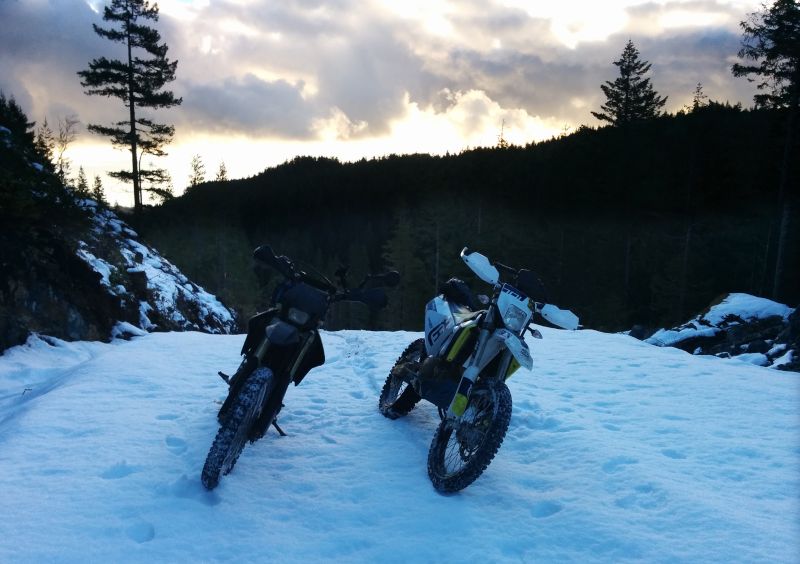 Given that it was just Luke and I (non-newbies on light bikes), we didn’t stick entirely to the mainline.

We started up the west/optional leg, and promptly got to the creek crossing. From there, we followed the main/beginner loop up to its north-most point… and continued north and headed up what seems to be the road to Trap Mountain. It has a number of creek crossings in it that are far from easy, and we turned back at the 2nd of these. It looked like we could cross trivially, but getting back was gonna be hard… so we put this into the “revisit when it is dry” category. (Nothing like trying to climb out of a creek bed, where the bank is held back by wet or frozen logs.)

From there we went back to the main loop, and down to the reservoir. Actually walked across the spillway and had a better look. There DOES appear to be a 10 or 12″ pipe that runs under the dam, with a valve that can be opened/closed from the little walkway on the dam. So it is not just a settling pond, it actually can be used to release water to maintain stream levels… although the valve seems to be leaking.

Played in the gravel pit just on the S side of the reservoir, and took the old/overgrown “doubletrack” trail to the E just S of the gravel … couldn’t remember where it went or if I had made it to the end on the KLR. It doesn’t go anywhere, just an old spur.

From there it was S down the main loop to where the power lines cross the main road. Luke had expressed an interest in riding the road under the powerlines … so we took that W to the other side of the loop. That’s some neat riding. In the middle there is an intersection with a “McPhail Rd” street sign. I assume someone stole it and put it there as a joke.!? It is a useful marker, as the entrance to the powerline track from the W looks to be quite difficult (steep). Easy enough to go down (heading W) but coming back would be hard. There is (seems to be?) an alternate route just a bit to the south, which leads to that McPhail interestion. I know I got there on the KLR, and I don’t think I rode the power line segments.

From the W side of the loop, we ran pretty much N up the W side, still trying to get to the end of what is posted as “East Tugwell”. We did take a detour when I re-recognized the road that Tony and I came out on months back… where I took the shots of him riding through the water. I couldn’t remember where the other end was so I wanted to ride up it. That took a bit as we had to clear a path around one big blow-down, and Luke sawed through two other (smaller) trees… but it’s a nice little non-trivial detour, and good to find it again. (rode the other way when leaving).

We got to the point where Colin and I turned back a couple weeks back without any trouble. The snow was pretty much all gone up to that point. But go a little farther and you’ll find snow, and it got fairly deep with a hard crust fairly quickly… We were also running out of day, so after a couple climbs where we were pushing the bikes, we turned back…. We ran down the W side, re-running both the re-discovered detour and the optional leg again.

Was a good day. Cold ride home though (in wet boots and a sweaty shirt).

Hope to do something with the video.