Chased the power lines West of Muir/Kirby. Ended up going up Sandcut Main and continuing West. Climbed “the matterhorn”.

This was a long ride, and by the end of the day, a wet one. I started at Muir main. I paused and had a muffin by the side of the highway to see if anyone else was riding that I could tag along with. No-one else out, so I went back to the “follow the power lines” plan. No surprises at the Muir entrance, did explore a few tracks I hadn’t been down (sorry, those got cut out of the GPX track, a little over-agressive in my trimming). Up Muir to Kirby, across Kirby Creek and go left at the top of the hill. S on Kirby Main toward the power lines. One detour on the spur just N of the one to the backside of “the rope crossing”. That ends in an un-mapped trail that I’d like to explore on the DRZ.

Back to Kirby and S to the power lines. W along the powerlines to the spur headed up to “the Matterhorn”. I’m kicking myself for still not having taken a shot of the matterhorn’s impressive S-SW face. A couple of the guys on ADVrider talk about climbing peaks, and I’ve looked at this one, but hadn’t tried it.

The GPS showed trails, which seem to start going up the creek bed to the right of the above shot… which is a typical clear cut story in its own right. 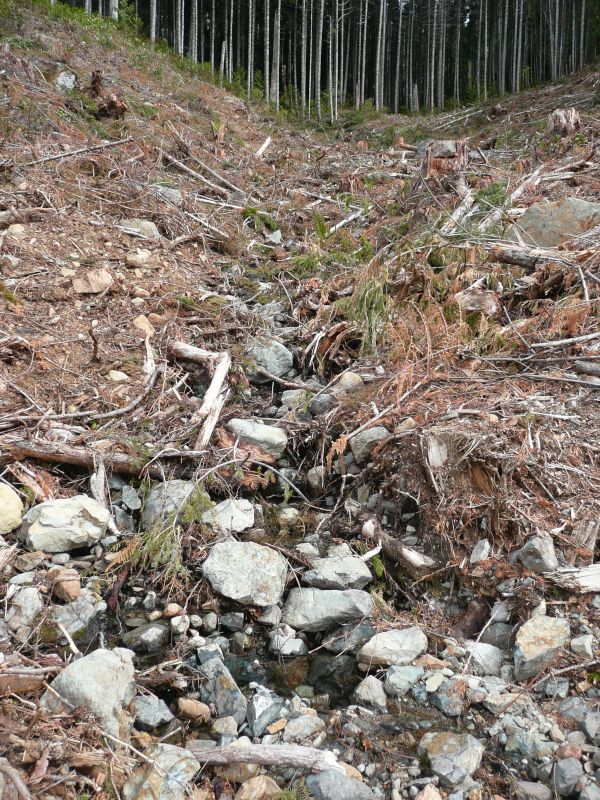 The matterhorn is up to the left, but the right wall of this valley is an impressive chunk of rock too. 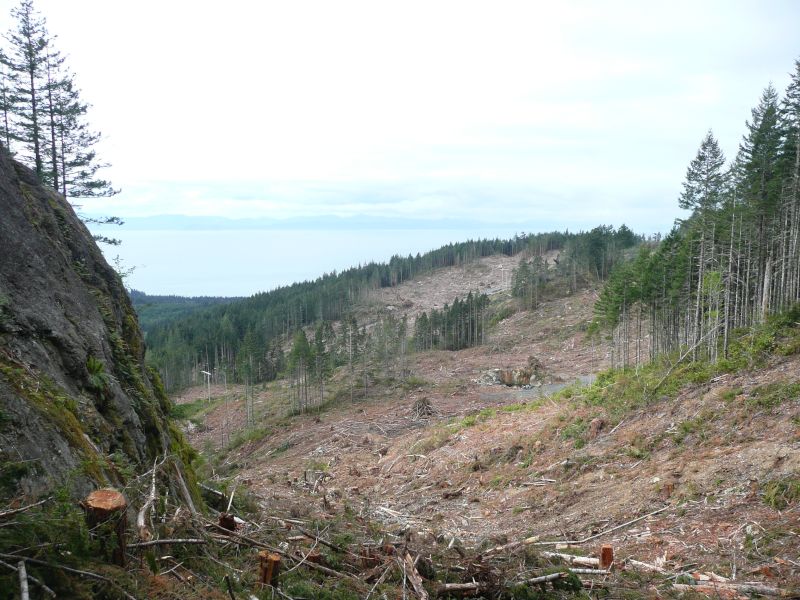 … but it is not as sheer and neck straining as the matterhorn on the left.

Turns out I shot this from the trail, but the trail doesn’t go up that face. I basically went along this face to the left until I found something I could safely climb (solo in motorcycle boots). I tried to get up this crevice, but it was too steep, muddy/slippery.

Sorry, you’re going to want to click on the panoramic shots. I haven’t figured out how to get around wordpress messing up the aspect ratios.

Part of the inspiration for the climb was to see if I could get a good shot that captured “down”. I like to think this one comes close.

Another pano, this one looking more to the S-SW.

Another lame attempt to get “down”. 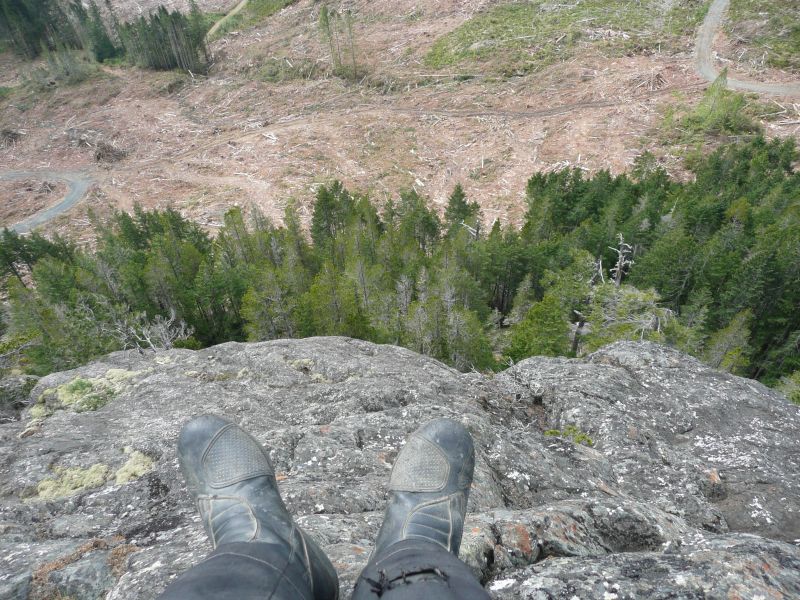 I came back down via one of the trails…

From there it was on the bike and back down the power line roads. Took this “nature imitates bad art” shot from a hill with a radio shack and heli pad. All the trees growing at the same rate, with the same branch spacing…

Toward Jacob Creek the road started to get steep, and since I never take images of the more challenging road, I stopped.

And then it got a little steeper, so I stopped again, put the bike on the kickstand, and …

… it rolled or slid forward, the kickstand came up and she went to sleep. Which DOES demonstrate the point that stopping on steep loose surfaces is tricky. Still, I wasn’t looking for a shot of a skid plate :(

IMHO this type of surface is NOT that difficult to ride, but it is probably the most obvious case where an abundance of caution can get you into trouble. You need some speed to be able to recover from a steering jolt if you hit a bigger rock, and if you’re using all your traction to slow the bike, then you are on the EDGE of your traction all the time… one jolt and you might exceed it. Look ahead, if the road gets easier ahead then let the bike coast down to that section, use your traction to steer, not so much to slow.

If you’re going up this type of stuff, keep your speed up. Starting on this is hard, and if you do have to stop either stall the engine or use the rear brake… the front wheel brake probably will just slide so you will need to use the rear wheel to hold your position.

The above were shot at around 48.409,-123.967 … where the logging co added a switch-back to the power line road and connected it to their network instead of just leaving you looking over a canyon. (Yay! They don’t usually seem to like making connections.)

From here Jacob Creek forces the roads back S to West Coast Road. West along that to Sandcut Main to get back in again.

Lots of signs, but none of them say no tresspassing! Caution this, Caution that, but they don’t actually say keep out. That trail to the left is fairly simple, just cosy up to the gate and then ride across the road and up the trail. There is a sharp turn and some roots. It is harder than the Anderson gate, but not by a huge amount.

More riding and exploring. I stopped at a “crushed rock” pit… I’m still trying to figure out where they get the rock they build the roads out of…

Obviously some of it is blasted, but most of the good stuff must be naturally fractured. This particular pit had examples of both.

A shot of a one of those little wilderness waterfalls 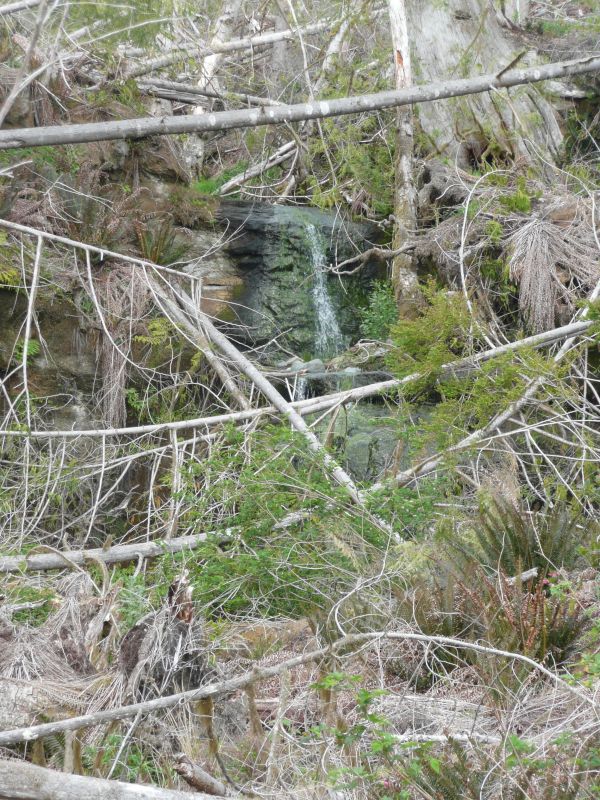 Strange, they seem to look better when they aren’t smothered in slash.Although I suppose with summer stream temperatures getting as high as they do now, perhaps any shade is good shade? 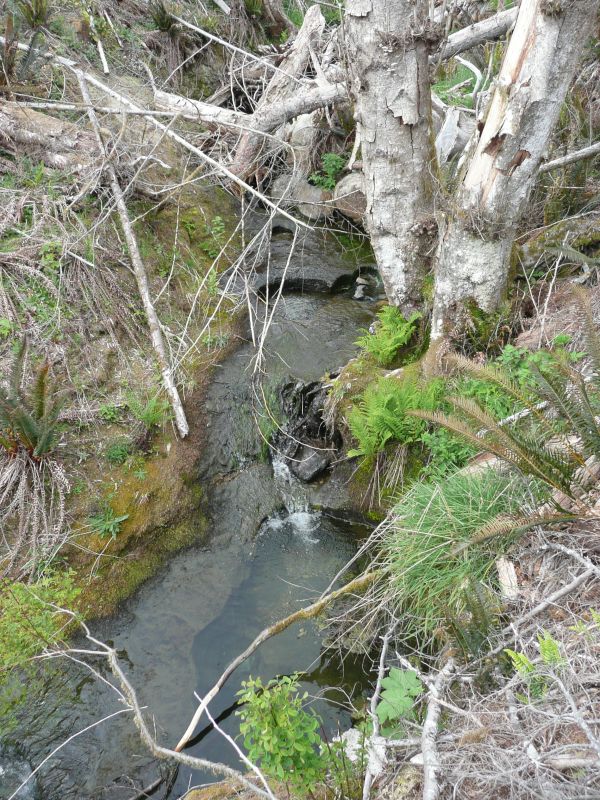 Neat little creek with little potholes in it. Makes one wonder if adding a gold pan to the pack might be a good idea.

Up in the middle of big clear-cut I saw a culvert sticking out of the side of a road (e.g. way up in the air), so stopped to have a look.

Yikes! Not exactly building to last. Culvert in the air was just a culvert that didn’t slope anywhere near as much as the ground did.

I was trying to see if I could get from the Sandcut main area up into the E11 area, which meant I needed to get past this. 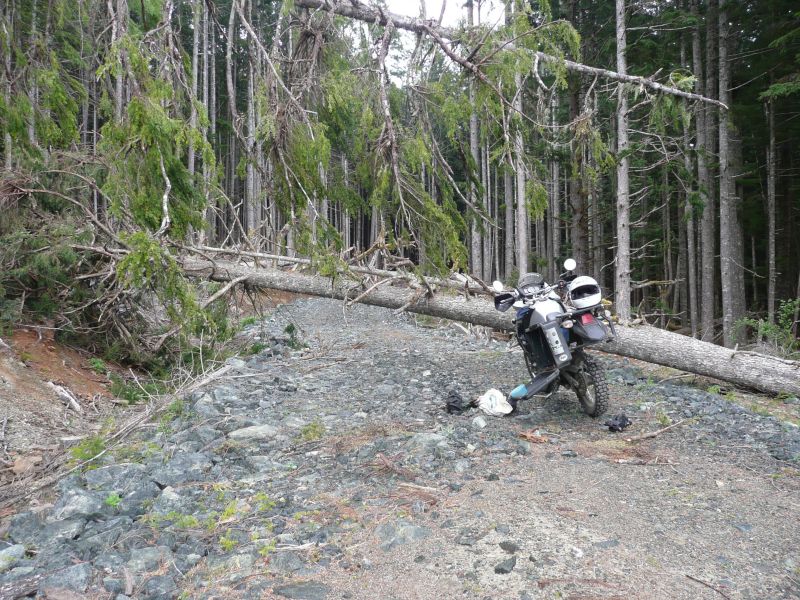 On the DRZ, I probably would have built up a bit of a ramp on the right and gone over the trunk. Might have even been the right thing to do with the KLR, but I chose to clear the ditch instead. I should have spent a little more time sorting out the ditch to roadbed transition. 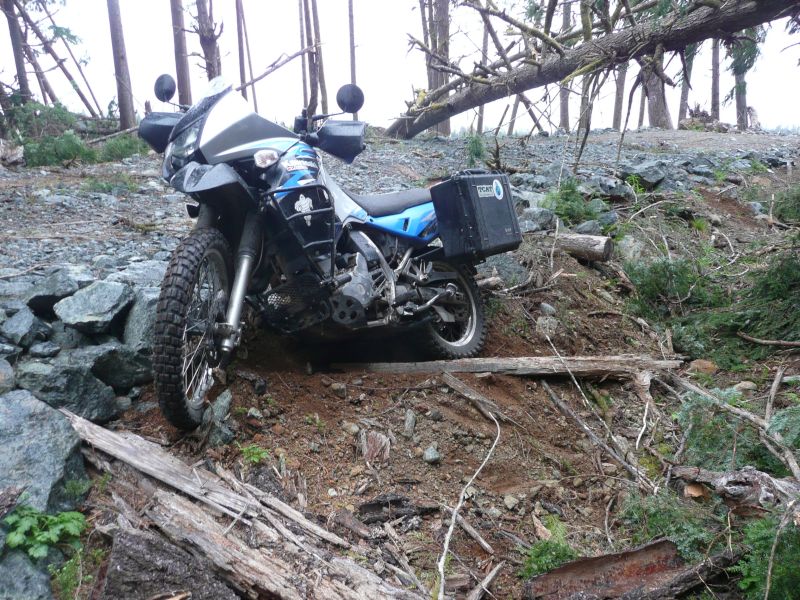 That didn’t actually go so well. Ended up just pulling the bike straight up onto the road. Was starting to get pretty tired. It had been pretty muggy earlier, but by this point it had been drizzling for a fair while.

And no luck on the connection to the E11 area, Things are pretty steep from this side.

From there it was basically winding my way outward toward westcoast road while still exploring. Stopped for a drink at McManus creek where S050 crosses it. 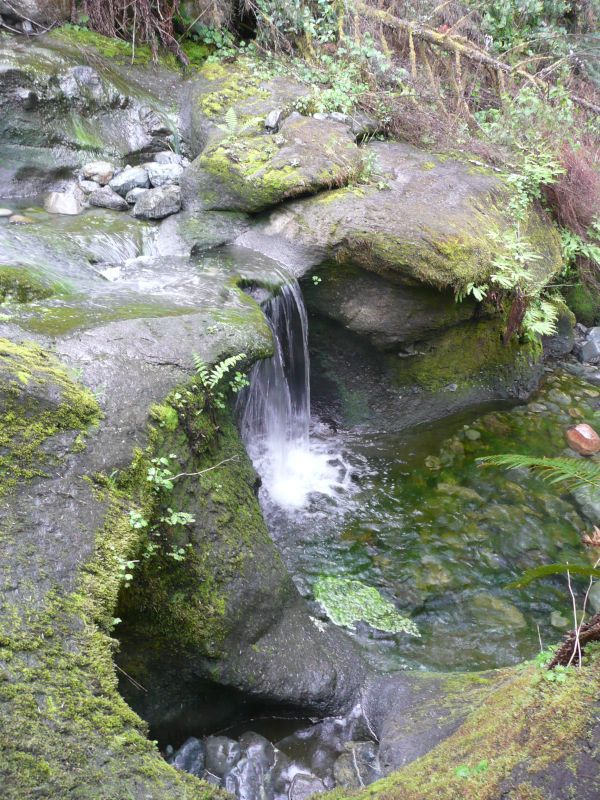 Ran up and down the power-line accesses on the W side of the (McManus) creek. Tried the N end of E200 … that was pretty overgrown, the bike is still covered in bits of broom and alder.

I was getting cold (as well as tired) by this point, so headed down E200 to Westcoast Rd. That gate is tall enough I could actually get the KLR under it solo without having to actually put it down.

Tried to stop at Shirley delicious on the way back, but hadn’t realized that it was past 6pm (I left the house at 9:15). So rode through to Sooke where I stopped for a coffee and to change into my dry shirt and put on the sweatshirt. Then rode home. Throw this in as another “overdid it” day.

If that wasn’t enough pictures. Go straight to the album.